Mercedes bounds into electric cars with the pacy and sporty EQC

While a mix of incredible pace and its ease of use may lure car enthusiasts to this electric Merc, the price may cause second thoughts 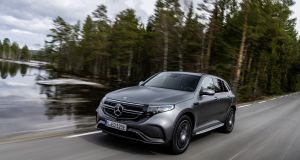 While the incredible pace offered by electric power when you kick down can set pulses racing, there is an overriding air of calm that comes over you behind the wheel of the EQC. Part of this is due to its silence, partly to the cabin layout, but mainly it’s down to the lack of effort needed to drive the car

The supposed green wave that swept across Europe’s political landscape last week might have mainstream political parties putting together new climate-change policies, but it shouldn’t catch the motor industry unawares. The car giants know they need to get the car out of the climate-change debate. Urgently. Yet some are still arriving late to the party.

It is 133 years since Carl Benz applied for a patent for his “vehicle powered by a gas engine”. Now the car company he fathered is finally offering a volume production fully electric car. It has been a long time coming.

Like all the established car giants, Mercedes-Benz has dabbled with all facets of power options, but six years after BMW introduced its fully electric i3 – and nearly a decade after Nissan launched its Leaf – the company that gave us the first petrol-powered automobile is finally offering an electric model.

Despite a history of innovations Mercedes-Benz has been regularly beaten to the punch when it comes to plug-in cars. Even in the format chosen by the German premium brand for its first electric car – the lucrative crossover market – rivals Audi and Jaguar already have metal on the motorways.

That’s not to say there is nothing to lure buyers to the EQC. For a start there’s the styling that looks sharp and sporty without being kooky.

There is no question of the car’s parentage courtesy of the sizeable three-pointed star on the grille, while the smart curves on the rear resemble the look of its impressive rival the Porsche Macan.

Inside the ECQ feels slightly larger than the regular GLC, with which it shares several major parts. It also boasts the latest in-car tech system, with a large 12-inch screen stretching across the dash.

But, as with its electric rivals, arguably the most impressive trait that will lure car enthusiasts is the mix of incredible pace – 0-100km/h in just 5.1 seconds – and its ease of use. That’s down to the driving set-ups on offer.

There are four recuperative drive options on the EQC, chosen via paddles on the steering wheel.

In D+ mode the car drives like a regular petrol model, coasting freely when you lift off the throttle. In D mode, there is relatively low energy recuperation, largely unnoticeable from the D+ setting. In D- it’s like a hybrid, slowing slightly as you lift off, so you can feel the resistance as the electric motor garners some energy from the momentum to recharge the battery. In D- - this affect becomes so pronounced that the car can largely be driven with just one foot: lift off and there is enough resistance to rapidly slow the car to a crawl. It’s like driving an old-school bumper car.

Finally, there is D auto, which is where the car’s intelligent software, dubbed Eco Assist, comes into play.

Using a mix of sat-nav information and feeds from a front camera and radar the car drives like normal but recuperates power when you are going downhill, or when it realises you are going to have to reduce speed because of a slower vehicle in front.

It sounds rather complex, but it’s remarkably easy to use, and lives up to Mercedes’ claims that it uses “predictive driving for economy”. For regular everyday driving D auto is the setting of choice. However, around town and in traffic, the one pedal D-- mode is ideal for easy relaxing urban driving.

While the incredible pace offered by electric power when you kick down can set pulses racing, there is an overriding air of calm that comes over you behind the wheel of the EQC. Part of this is due to its silence on the road, partly to the cabin layout, but mainly it’s down to the lack of tasks or effort needed to drive the car.

You’ve no gears to worry about, the vast array of active and passive safety features intervene to keep you on the straight and narrow, and in the right driving mode you only need to move your right foot to go and stop. You need to steer the EQC of course, but even that task is reduced thanks to a level two autonomous driving system. If anything the lack of effort can make driving this electric crossover – and its rivals – a little boring. But floor the throttle and the thrill returns.

The old issue of range anxiety is gradually becoming a thing of the past as well, with a promised range on a full charge of up to 450km, which translates into an official estimate of 374km to 417km. Those figures make the EQC a practical family car for many Irish motorists.

During our test in the electric Merc we recorded figures on one of our test routes, a 50km spin over mainly national roads. With speed limits of 80km/h on most stretches, our range over the 50km stretch went from 214km to 185km. Clearly the recuperation system was replenishing the battery as we went.

This sort of statistic was repeated over similar mileage later in the day in more urban areas. And over a 100km route in the evening we managed to average 20kw/h per 100km. Given the battery has a capacity for 80kw/hs, that suggests we should have been able to manage a range of 400km or so on a full charge.

Another reassuring factor to overcome range anxiety is Mercedes’ app-based software system. Underpinned by a deal with Digital Charging Solutions (DCS), it not only calculates the best route to any destination, taking into account the charging needs along the way, but you can also pre-book charging stations using the system, so you will not have to worry about someone getting to a recharging point before you arrive.

By using DCS it means the bill for any charges goes through your DCS account, avoiding having to register with multiple suppliers if you need to drive some cross-country trips.

Mercedes is also part of the Ionity network of fast chargers, which deliver power at up to 110kw/h at present. So with the EQC’s 80 kw/h battery, Mercedes claims you should get from a 10 per cent charge to 80 per cent in under 40 minutes.

There is currently one Ionity charging station in Ireland – at Topaz in Cashel, Co Tipperary, and with four charging points at the station – and there are plans for more Ionity stations in the Republic in the coming years. Of course the EQC can be charged using all the various recharging units right down to a three-pin plug, but that might take all day.

As to claims that electric cars are not as green as regular petrol or diesel models when the vehicle’s production is taken into account, this is refuted by Mercedes.

The initial production for an electric car does result in higher CO2 emissions than a petrol or diesel equivalent due to the necessity for mining resources for the battery. However, after 200,000km of use a fully-electric vehicle will have a total lifecycle CO2 emissions figure of less than 60 per cent of that of a petrol car. That figure drops to close to 30 per cent if the electricity supply comes from renewable energy.

Back behind the wheel, and we also got to test the EQC’s dynamics on a closed airfield. Thanks to the weighty battery being placed in the floorpan in the centre of the car between the wheels, this Merc has a much lower centre of gravity than regular cars, not to mention a better balance of weight as the two electric motors on either axle are lighter than the average combustion engine. It results in a relatively tall car that corners like it’s on rails.

None of this is unique to the electric Merc, of course; all the other electric cars manage this feat, but the EQC is impressive in the way it manages to avoid wheelspin when laying all that remarkable torque on the tarmac, something rivals don’t always overcome.

So if you’ve got the styling, the speedy acceleration and a relatively viable range, has the brand which patented the first petrol vehicle finally cracked the electric market?

There remains one hurdle that many motorists will still find insurmountable: the price.

Prices are not set, but we can expect them to be in the region of €90,000 before the various tax incentives kick in. Those rebates and grants should bring the final customer outlay down to €80,000, but it’s still a big wad of cash to lay out for a five-seater crossover. Similarly-sized diesel alternatives from premium brands – including Mercedes itself – are retailing for €30,000 less than that.

Increasingly it will be price rather than a prejudice against electric cars or range anxiety that will hold buyers back. That’s why premium brands have a better chance than most: their buyers have deeper pockets and are normally willing to spend a little more to have one up on the neighbours.

Mercedes-Benz may be late to the party, but with a total of 10 new fully-electric models on sale within the next three years, it will still play a major part in the electric revolution that’s under way. It should be enough to keep even Extinction Rebellion protesters relatively quiet.