Big new 4x4 comes only as a diesel at first; plugin hybrid later 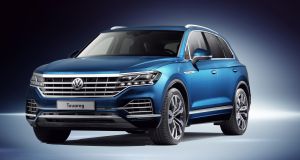 It might be lighter than the old one (to the tune of 106kg) but the new Volkswagen Touareg remains the biggest and most imposing vehicle from Wolfsburg (assuming you don’t count the Transporter van or Amarok pickup of course…). Launched with much fanfare in Beijing, with China likely to be its biggest market, the Touareg will arrive in Ireland in July. But this time, it won’t be available as a cheap-to-tax N1 quasi-commercial vehicle.

That probably means, in Ireland, that we can expect to see a major drop-off in sales as this time around the Touareg won’t qualify for N1 commercial vehicle status. That N1 loophole in the tax system has seen everything from a Bentley Bentayga to a Ford Kuga given commercial vehicle status, but the loophole is being slowly closed. Vehicles that want to qualify for the dodge, which allows them to be taxed at 13.3 per cent Vehicle Registration Tax, must be registered before July 30th this year, and the Touareg won’t be here in time for that.

In the meantime, VW Ireland expects something of a sales rush for the outgoing Touareg, still qualifying under N1 regulations, as the new model approaches.

The new Touareg doesn’t lack for size, mind. It’s 77mm longer and 44mm wider than before, and rides on the same MLB platform as the Audi Q7, Bentley Bentayga, and Porsche Cayenne. The boot has grown to massive proportions - a whopping 810-litres, fully 110-litres bigger than the outgoing model.

Inside, VW has banished the rather cheap-and-plasticy look of the current model in favour of a high-tech new cabin that it calls ‘Innnovision’.

That means you get an all-digital 12-inch TFT screen instrument panel, and a huge (sensing a theme, here?) 15-inch infotainment touchscreen. Tech highlights include a night-vision camera (a technology that’s suddenly coming back into vogue), lane-keeping steering, traffic jam stop-start assistant, front-crossing traffic detection (which helps when pulling out of badly-sighted junctions) and a driver fatigue monitor. In spite of the size, VW says that this all helps to make the Touareg more like a phone, than a car. “Drivers use the Innovision Cockpit to adapt the assistance, handling and comfort systems specifically to their personal tastes; the car becomes ‘their’ Touareg” said a spokesperson. “This opens up a world in which the driver and on-board guests no longer have to adapt to the car; rather the car adapts to them. Like a new smartphone, the Volkswagen is set up and tuned to personal needs.”

For the moment, the Touareg will come only with diesel engines, and that means two flavours of 3.0-litre V6 TDI - 231hp and 286hp versions. It’s possible that a base model, using VW’s 190hp 2.0-litre four-cylinder turbo diesel will eventually follow, but there will definitely be a four-cylinder Touareg - a 370hp plugin hybrid model, using a 2.0-litre TSI petrol engine and electric power. That model is currently being developed for China, and VW says that it will most likely come to Europe too, but that “its exact launch date in Europe is still open.” There will also be a sporty R model, using the 335hp turbo V6 petrol engine from the Audi SQ5.

Whatever engine is on board, the Touareg should be rather more engaging to drive than before, seeing as it gets the same 48-volt active roll-control system, as already deployed to great effect in the Audi Q7. All versions, for now, have full-time four-wheel drive, and an eight-speed automatic gearbox. And even though VW says that serious off-roading was less of a priority than before, the Touareg can still tackle up to 500mm of standing water, thanks to (optional) air suspension that can pump up the ride height by 70mm if needed. There’s also the option of rear-wheel steering, which improved the handling at high speed, and which makes this big 4x4 rather more easy to manoeuvre in town.

Sales of the new Touareg start in Ireland in July, and prices will be confirmed in the next few weeks.