Biggest improvement is in the cabin and crash safety, but emissions are still high even after dropping some horsepower 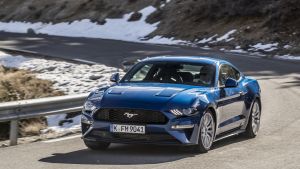 The Ford Mustang has been given a mid life makeover. The exterior is freshened up to look sleeker, while under the hood the engines are a little greener. The cabin features some new interactive technology plus improved soft touch materials and finishes.

Significantly in an effort to remedy the car’s poor EuroNCAP crash rating Ford has made a host of new electronic driving aids standard. The Mustang has been officially on sale in Ireland since 2016 and has a dedicated following of an estimated 170 owners.

That number seems tiny but for a specialist sports car it is not bad at all. In Europe the Mustang has sold in excess of 33,000 units and was the world’s best selling sports car in 2016. When the first ever right hand drive ‘Stangs’ landed here it was worth the wait.

The Mustang for the first time was tuned for European tastes and could handle thanks to independent rear suspension. Up to this point every Mustang that went before was truly rubbish to drive. The saying never meet your heroes was simply too true. The original Mustang was the world’s first mass-produced muscle car.

When Ford introduced the first pony car in 1964 it inadvertently invented a new car class. Over the years the Mustang mirrored the declining US motor industry and some truly dreadful variations went on sale. Thankfully, Ford never had those Mustangs to drive on our side of the road.

Hollywood has played its part in creating an image for this car but for many buyers you need to travel further north of the LA suburb to San Francisco to really buy in to its movie heritage. The classic Steve McQueen movie Bullitt was shot in and around the hilly city and its car chase is unforgettable. There is even a tuned limited edition Bullitt Mustang on the way to honor McQueen’s memory.

Ford has made a number of mechanical and cosmetic improvements to the latest Mustang that arrives in Ireland in December 2018. Ford has also worked with OE tyre suppliers to deliver more mechanical grip. The GT gets very sticky Michelin tyres that are impressive while the 2.3 comes equipped with Pirellis. A greater level of customisation is available in the two body forms of coupe and convertible.

The petrol 2.3-litre four cylinder and 5 litre V8 engines are carried over but reworked to deliver better performance in terms of emissions. European and US Mustangs up to now featured a different bonnet due to pedestrian crash protection regulations but this is now rectified with a sleeker new bonnet that is lower set and aerodynamic. LED lighting is now standard front and rear and there is a new rear bumper.

A new selection of alloy wheel designs hit the options list also. The Mustang is not a car for the shy so the addition of three new exterior colours is no surprise: Kona Blue, Orange Fury and Royal Crimson bring the total available to 11. If you like your optional racing stripes you’re in luck as they’re available in white or black.

The Mustang’s aerodynamic performance has improved by up to three per cent. A new front splitter, lower front profile and revised rear diffuser also aid down force. Mechanically the limited-slip differential is carried over and there is a new and far more efficient automatic gearbox.

The new 10 speed automatic was co-developed with GM and is available in the current Ford F150 pick up. The new and conventional torque converter auto box is terrific and not only delivers faster gear shifts than the standard six speed manual gearbox is capable of in both engines, but its greener too. The manual gearbox was my preference in the outgoing car for sheer fun, but now its got to be the auto. New rev matching technology, where the engine blips itself, is available with the latest manual gearbox but was not available to us test. Ford assured The Irish Times it delivers smoother and faster down shifts.

The Mustang continues to be a whole heap of fun to drive. With the press of a few buttons drivers can engage electronic line lock. This party trick allows drivers leave massive tyre tracks on the road surface when accelerating from a standing start. This differential locking feature was a standard on the V8 only up to now but is now standard with both engines.

The Mustang has a number of electronically controlled driving modes but in addition to normal, sport, track and snow/wet modes there are two more with the facelift: My Mode enables drivers select their own preferred settings for performance, dynamics and exhaust sound. My default setting was normal driving dynamics with comfort steering and the very loud racetrack exhaust (I know). The more dramatic sounding drag strip mode optimises the car for maximum acceleration during standing starts and quarter-mile drag races so loved by our American cousins. It even facilitates stationary burnouts to warm up the tyres.

Another party trick up Mustang’s muscular sleeve is the variable exhaust note it can deliver in the 5 litre. Active exhausts are nothing new and while the 2.3 makes do with a faux but still beefy engine note enhanced through the sound system the 450hp GT gets an active flap exhaust. This delightfully anti social feature makes the most of the V8’s natural primal burble and is grin inducing.

Following complaints a top Ford exec received from neighbours about his V8’s deafening noise on start up, think gentle bird song interrupted by Tchaikovsky’s 1812 overture, a solution was sought. ‘Good neighbour mode’ puts manners on the active valve performance exhaust forcing it to its quietest setting on start up. Driver’s can set a timer to automatically activate/deactivate the system too. If you don’t like your neighbours there’s always the track setting.

Collision safety has been a weak point with the Mustang. The motor industry was shocked at how poorly the car performed when tested in 2017 (LHD) with a mere two stars at Euro NCAP. Following a few minor tweaks by Ford a reassessment secured a three stars rating but now Ford is looking to score higher. The new driver assistance technologies included as standard feature auto emergency braking, pre-collision assist with pedestrian detection and lane keeping aid. Adaptive cruise control is also new.

Our test cars were fitted with Ford’s new MagneRide optional suspension set up for Mustang. It is a variation on other magnetic shock absorber systems that can deliver very quick responses to changing road conditions. Special fluid inside the shock is electronically stimulated to generate higher or lower resistance depending information from sensors.

The ride quality is very good and there is a sense of precision through the steering. Precision is a word seldom used about an American muscle car. The front suspension is an independent double ball joint McPherson strut set up with a tubular stabiliser bar. At the rear is you’ll find an integral-link independent set up with coil springs, solid stabiliser bar and twin-tube dampers (2.3-litre EcoBoost) or mono-tube dampers (V8).

Emissions from the big engine are sadly very poor too at between 270-285g/km of CO2 depending on the gearbox and roof choice. The convertible GT with a manual six speed gearbox is the dirtiest. The V8 is delicious to use in a straight line. The roar it makes is primal and while the outright performance is not quite neck snapping the big beast feels terrific. When cornering you are aware of the heavy engine up front and the word nimble will never be used to describe its dynamic ability.

The Mustang is still a car to be respected, especially on a damp surfaces. With a slight adjustment to one’s usual driving style the GT is really a hoot to use. The biggest improvement is seen in the cheaper offering.

Surprisingly there is a drop in horsepower from 317hp to 290hp with the EcoBoost 2.3-litre to aid emissions. Torque is impressive at 440nm. When combined with the new auto gearbox the Mustang’s performance, despite the losing horses, is improved thanks to an over-boost function for the turbocharger that is activated under heavy acceleration.

The 2.3-litre EcoBoost is far lighter and drivers will notice the difference when cornering. Combined with the new 10 speed auto the 2.3 manages to feel nimble and manageable, but don’t worry the car’s bulk and rear wheel drive set up will still keep you on your toes and it is this sensation that makes the Mustang experience so special. While both engines deliver enthusiastic and engaging performance, the 2.3 is the one most Irish buyers will choose.

It is quick enough for thrilling driving, about €20,000 cheaper and kinder at the fuel pumps. It doesn’t matter if you can’t stretch to the butch V8 with its GT badge and four exhaust pipes at the rear… hang on what am I saying! If you love attention or have shares in a filling station get the V8, it is awesome but the EcoBoost is sweat too.

The latest Mustang is much improved and has lost none of its ability to turn heads. Behind the wheel the sense of occasion is truly enjoyable.

Verdict: The Ford Mustang is more than the sum of its parts. Driving is an occasion to be enjoyed and savored.