Crushed by the SUV: What’s to become of the family four-door?

Peugeot’s new 508 is a fillip, but the classic saloon looks doomed to extinction 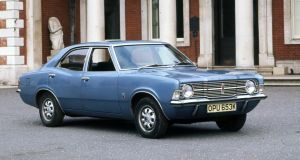 Classic saloon: we used to buy the likes of the Ford Cortina, but they’ve been eclipsed by bigger, pricier SUVs

That Hyundai has, with its Tucson crossover , held the bestselling-car spot in the Republic for the past two years is remarkable enough. The Korean brand’s explosive growth, from modest beginnings four decades ago, to oust the little Toyotas, Fords and VWs that traditionally occupied the top slot is quite the achievement. To have done so with the Tucson, an SUV with a price tag starting at close to €30,000, tells you a great deal about how much the Irish car market has changed since the turn of the century.

Back in 2000 the bestselling cars were all cheap, affordable-to-run hatchbacks. The Ford Focus often as not held sway; those needing something larger and more useful for family life went for a Mondeo, Toyota Avensis, Opel Vectra or VW Passat. Big, comfy and relatively affordable, the midsize saloon held a warm place in all our motoring hearts.

Look at the top 10 cars now and you’d never know it. Only the Skoda Octavia carries any kind of saloon-car flag. (It looks a bit saloony, in spite of actually being a Golf-sized hatchback.) Where are the four-door stalwarts? Way down the sales charts. The bestselling midsize saloon is the VW Passat, and that’s in 20th position. The next one down is the Skoda Superb. To find the Mondeo, which was once a bestselling model in its own right, you have to scroll down to 35th place, to find that so far this year it has sold 488 units, an 11 per cent fall on last year’s sales. Worse still, it’s more than 50 per cent down on the numbers it was shifting a decade ago.

Into this plummeting saloon-car market comes the new Peugeot 508, launched to no little acclaim at Geneva International Motor Show. Sleek and sexy enough to win our admiration as one of the best cars at the event, the 508 nevertheless has its work cut out. It’s trying to swerve around buyers’ preference for SUVs by being really good looking, by being, with luck, agile and sporty to drive (we won’t find out for a bit) and by having such features as coupé-like frameless doors and a huge fastback-topped boot. Even so, how will Irish customers take to such a car now we’ve all gone SUV crazy?

“It is interesting to see that the premium end of the D segment” – midsize four-door saloons – “where the new 508 will be positioned, has actually seen some growth in 2018 – clear evidence that not everyone wants to drive an SUV,” Des Cannon, managing director at Gowan Distributors, Peugeot’s Irish importer, says. “The new 508 fastback model is sure to attract first and foremost the B2B user chooser, then certainly the 40- to 45-year-old private buyer who simply doesn’t want to drive an SUV. Indeed, while SUVs now account for over 40 per cent of the Irish new-car market in 2018, not everyone has a need for one and not everyone wants to drive one.

“But to continue to grow a brand, and capitalise on any wins, you must have a strong presence and garner market share in all segments, to cater for all tastes – and, indeed, 60 per cent of the remaining market. And while we may have seen decline in the traditional saloon D segment, we will aim to take 5 per cent of the segment in 2019, a segment that still remains important and will still represent up to 13,000 vehicles in 2018.”

Ford’s head in Ireland, Ciarán McMahon, isn’t so sure. We spoke to him at the launch of the company’s latest ST-Line models, sporty, body-kitted versions of the Edge SUV, the small EcoBoost crossover and the S-Max MPV.

Parked in a corner was the ST-Line version of the Mondeo, looking just a touch lost among its SUV brethren. Which is more than a little unfair. The current Mondeo is in no way as good to drive as its direct predecessors – blame initial development by US-based engineers, working on the North American Fusion version – but, compared with its closest SUV relative, the Kuga, it’s much sharper to drive, offers a smoother ride, is better looking, has a more comfortable cabin and, with 541 litres of boot space, is actually more practical than the SUV, to the tune of 100 or so litres. Yet it languishes, and McMahon says he sees no signs of a turnaround.

“The SUV segment just keeps going and going, and it’s getting stronger. The Mondeo segment is now only 6 per cent of the market. It used to be 20 per cent, so it’s getting smaller and smaller, and that’s not going to change. That being said, the Mondeo’s doing quite well, proportionally speaking, at the moment. We’ve actually improved our segment position, year over year, and it’s a good fleet car for us,” he says.

“There is always going to be a requirement for a fleet car in the market, unless fleet companies change their car policies completely and say that everyone can drive SUVs, which they may do eventually, but I see there being a requirement for the Mondeo-style car going forward.”

Ford has this year launched a new hybrid version of the Mondeo, which it hopes will renew interest in the old charger, and fuel-saving technology might just be the saviour of the traditional four-door. With generally less weight and far better aerodynamics, a four-door has at least the potential to be more frugal and have lower emissions than its SUV relatives (and longer range than electric cars).

Fiat Chrysler’s design head, Ralph Gilles, made just this point recently. He told with Canadian Globe and Mail newspaper that the only way to keep popular SUVs within incoming fuel and emissions regulations is to load them with expensive technology – mild hybrid systems, active aerodynamics, cylinder shut-off and the like. Ironically, doing the same to a lower-slung saloon would “enable better fuel economy still, but there’s a finite amount of money the consumer is willing to pay for a sedan”.

Although the Passat is still relatively popular, Volkswagen isn’t even going to bother selling the new four-door Jetta in Europe

Will the fuel-economy checks of the incoming worldwide harmonised light-vehicle test procedure, or WLTP, have any effect? They’ll be tougher for all cars, but is there a chance that poorer official fuel-economy and emissions figures will make consumers think twice about buying an SUV? Ciarán McMahon doubts it. “All the emissions are going to go up, so I don’t think that WLTP will be a factor. We’re all going to be affected equally.” The even more stringent real driving emissions test, due to arrive in 2020, might make a difference, but again it will affect all cars’ results, so maybe not.

In fact Groupe PSA, owner of Peugeot, Citroën and Opel, seems to be one of the few carmakers still ready to champion the four-door saloon. Jean-Philippe Imparato, Peugeot’s chief executive, says the new 508 was needed “to shake up the market with a vehicle that rivals the best. And in D-segment cars we’re competing with the world’s greatest automakers.”

His opposite number at Citroën, Linda Jackson, has confirmed that her company will follow suit with a dramatic new saloon, noting that four-doors are still relatively popular in the all-important Chinese market and that the new Citroën will “bring something different” to the market.

As for the rest, Toyota looks likely to let the Avensis slowly die off, and will probably replace it with a midsize SUV, sitting above the incoming RAV4 in size and price. Opel has just launched the new Insignia, but it’s not exactly setting the market alight. And although the Passat is still relatively popular, VW isn’t even going to bother selling the new four-door Jetta in Europe.

So will we soon see a day without four-doors, when the mainstream family-sized saloon is no more? Premium and luxury models will doubtless survive a while longer, but time could be running out for the likes of Ford’s former bestseller. “At the moment the Mondeo is still in Ford’s plans, and we’re developing the next car in that vein,” McMahon says. “There are no plans to delete it at the moment. But where it’s going to be in the whole market scheme in 10 years’ time? I wish I knew.”