Looking for a small crossover? These two are the best of the bunch 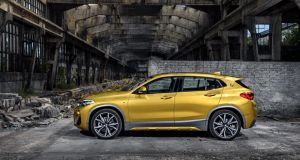 BMW X2: despite its size it can tackle the rough and tumble of driving through mud or snow 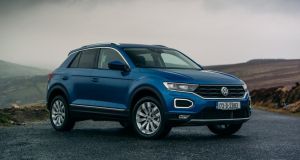 Volkswagen T-Roc: unlike the dull and boxy Tiguan, it delivers some character to VW’s crossover set

It’s time to accept the inevitable: high-set crossovers are here to stay – and Irish motorists are prepared to spend several thousand euro more for a hoisted hatchback if it bears even the slightest resemblance to an SUV.

The market is awash with these diminutive off-roaders, of varying ability and value. And we’ve tested more than a dozen in the past year or so. Buyers are flocking to this format. Larger versions have replaced people carriers; smaller iterations have devoured the saloon-car market. A fleet of smaller versions has lately set out to do the same to the traditional hatchback market.

So it’s time to make a call on the best of these hatchback rivals. Two models stood out from the pack after several hundred kilometres behind the wheel: the Volkswagen T-Roc and the BMW X2. There are more practical crossovers on the market, from both brands, but these are the most fun without compromising too much in terms of space.

First to the Volkswagen. The week we were testing it Storm Emma struck. Thankfully we had the 4motion four-wheel-drive version, a system that offers a trio of terrain settings, one of which is for snow. And the plucky little T-Roc was remarkably good at tackling the white stuff. The only times we really came unstuck were down to height limitations or a lack of grip.

That was down to a lack of winter tyres, something that Irish drivers tend to ignore in favour of spending thousands on fancy four-wheel-drive systems. A good set of winter tyres on a front-wheel-drive car can offer just as much grip as a four-wheel drive on regular summer tyres. If you want to get the most out of your four-wheel drive you need to have the right rubber connecting you to the road. But I digress.

Despite its relatively diminutive status, the T-Roc is surprisingly spacious inside, roomy enough for a couple of adults in the back and for the results of an Armageddon-preparation shopping expedition to Aldi in the boot.

Engine options start with a 1-litre 115bhp petrol, then a 1.5-litre petrol with 150bhp. But the 2-litre 150bhp diesel really delivers. Our test car was the diesel, which tops the range in the Republic, though the real star of the T-Roc show is the 190bhp 2-litre petrol, which turns the car into a GTi crossover.

On the road the T-Roc’s body control is a benchmark in this class, and it’s remarkably forgiving in corners, able to carry speed into the apex and turn through without the unnerving wallowing you get with rivals.

The T-Roc has been derided as just a high-set Golf, but even if that is the case, it’s a great starting point for any crossover. The T-Roc is substantially more, however

The T-Roc has been derided by some as little more than a high-set Golf, but even if that is the case, it’s a great starting point for any crossover. The T-Roc is substantially more, however.

For a start it’s a smart looking car. In contrast to the dull and boxy Tiguan, the T-Roc delivers some character to VW’s crossover set. It’s as if, after years of resistance, the German brand is finally accepting these cars are here to stay and therefore require some effort.

Prices start at €24,750 for the entry-level model; our fully dressed test car with the Sport trim comes in at €36,695. There is a case to be made for the Seat Ateca, a slightly more practical, and better priced, version of this car, but the T-Roc’s styling and quasi-premium finish give it the edge.

Although VW has a certain premium appeal, badge snobbery is alive and well on this island, so there remains a sizeable cohort of buyers who will look to BMW and its ilk. For these, the best small crossover out there is the new X2. Yes, that’s a surprise to us as well. BMW has been in a bit of slump of late, losing out in particular to the rise of Mercedes-Benz. Yet this new compact crossover does more than enough to be distinctly different from its rivals. Others will follow, but for now it has the lead. And that’s all the more impressive when you consider it is pitching against the Audi Q3, Jaguar E-Pace and the recently anointed European car of the year, Volvo’s XC40.

Like all the even-numbered X cars from BMW, the X2 is the sportier version, but this time the car is not some ugly aberration with a squatting rear end. The X4 and X6 are oddballs; the X2 is a stylish, properly finished car.

The interior is familiar to BMW buyers, which is a boon, but the trim is much better than it is in the likes of the X1 or the 1 Series hatchback. It shares the underpinnings of the X1 but is slightly lower to the ground and, with a stiffer chassis, and new springs and anti-roll bars, is far more agile on the road.

That sense of engagement is probably helped by the X2’s lovely driving position, although the sports seats in our M Sport X version did seem to be shoehorned into the car. Of all the optional grades, the M Sport is the best choice rather than the more expensive M Sport X.

With the X2 the engineers have kept the bean counters at bay. Soft-touch plastics and decent ergonomics make it feel like a proper premium car

Our test car came with the multiplate-clutch all-wheel-drive version, but in general Irish buyers will be opting for the front-wheel-drive version. There are three driving modes, Comfort, Sport and Eco-Pro, which helps keep you off the filling-station forecourt.

Again, as if to prove a point, we were testing the X2 when the second bout of snow descended on the island, over St Patrick’s weekend. And, again, a little four-wheel-drive crossover proved why it’s unfair to sneer at its stature when it comes to tackling the rough and tumble of driving through mud or snow.

The X2 isn’t going to set record lap times, with a 0-100km/h time of 7.7 seconds for our test version, but it does feel quick, and for a crossover it feels noticeably more engaging than rivals.

The X2 delivers in terms of styling, driving dynamics and premium fit and finish. The last element is arguably the biggest lure. Too often with these crossovers you don’t have to look far to see how the accountants have had their way in order to beef up the bottom line. With the X2 the engineers have kept the bean counters at bay. Soft-touch plastics and decent ergonomics make it feel like a proper premium car.

Engine options for now are a 2-litre diesel with 150bhp or 190bhp, or a 2-litre petrol with 192bhp, but we can expect this to be expanded with smaller three-cylinder options, bringing it into line with the X1 engine range.

Prices start at €43,960 for the 150bhp-diesel front-wheel drive; an all-wheel-drive version of that car is €46,670. Step up to the 190bhp diesel and you are looking at €51,910 before you start adding bells and whistles. That’s a lot of money for a car of this size, but many buyers don’t seem to equate price and scale in the same way any more.

Simply put, in an overcrowded, and overpriced, crossover market, the VW T-Roc and BMW X2 are the cars that offer the best mix of quality, styling and driving fun.