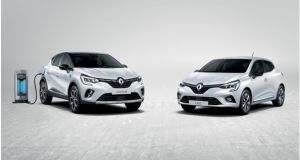 Renault’s new plug-in hybrid Captur and hybrid Clio: it has tapped into its years of experience from electric modes to develop its new hybrid set-up, and securing more than 150 patents in the process

Renault can see the end of the road for diesel versions of its smaller and mid-sized cars. The French car giant – an early advocate for full-electric cars with its Zoe and eFluence models – already decided to drop diesel versions of its new Clio models from some European markets, including Germany. Now it’s rolling out a new range of hybrids to fill the gap.

This is just the start of Renault’s major new electric initiative: by 2022, the company is promising to have eight fully electric models and 12 hybrids in its range.

First off will be the onset of the new hybrids, however. In the coming months, Irish buyers will be offered hybrid versions of its Clio, Captur and Megane models. The hybrid range comprises a regular hybrid system for the Clio and plug-in hybrid variants of both Captur and Megane.

Renault says it has tapped into its years of experience from electric modes to develop its new hybrid set-up, and securing more than 150 patents in the process. It also says that lessons from its Formula 1 racing team, where the racing cars operate as hybrids, has been integral to the new system.

“As in F1, kinetic energy can be recovered during deceleration and braking then transformed into electrical energy to recharge the battery. On standard vehicles, especially when on motorways, energy management rules start charging the battery by forcing the engine to operate its optimum [revs] yield. Excess energy can then be used to relieve the combustion engine when the accelerator is worked harder than normal, or to ensure a 100 per cent electric ride when the scheduled route goes through urban zones,” its engineers explain.

The hybrid system comprises a petrol engine, a battery pack, two electric motors and a newly developed transmission that Renault says offers a crucial advantage over rivals. The new gearbox allows the hybrids to always start in full-electric mode and also avoid the sort of slow throttle response – and consequent noisy high-reving engine whine – that has dogged many of its current hybrid rivals.

The new Clio E-Tech hybrid has a 1.2 kWh battery that Renault claims will let the supermini run in full electric mode for up to 80 per cent of its urban driving time. The promise is that emissions from the Clio will fall below 100g/km, with an expected combined fuel economy of 4.5l/100km.

In terms of differences between the Clio hybrid and the regular versions, there are only the most subtle of changes, such as a new E-Tech badge and a few touches of blue lighting to the interior. New additions to the Clio’s new digital dashboard include images and animations specific to hybrid, indicating battery levels while charging or when the electric motor is in use.

For the plug-in hybrid Captur E-Tech, a larger 9.8 kWh battery allows for up to 65km in full electric mode, according to the engineers. In reality this is likely to be closer to 50km, but that’s still within daily commuting distance of Renault’s suburban motorists drive on a daily basis. And Renault expects the new Captur to deliver an impressive fuel economy figure of 1.5l/100km with emissions of just 34g/km.

It’s too early to confirm prices for both new models, but indications are that they will be close to the equivalent diesel variants when they arrive on sale.