British carmaker ‘not jumping on the bandwagon, we’re redefining it’ 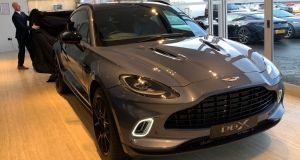 Aston Martin has already confirmed that at least a handful of Irish buyers have shown an interest in the new DBX SUV. Aston Martin’s first-ever big, practical car has now been shown off in the Belfast-based showroom of Charles Hurst, the only dealer for the brand on this island.

Those apparently-keen buyers are holding off on buying just yet, though, thanks to the fear of potentially massive Vehicle Registration Tax bills if they try to buy and import one. “It can depend who you get on the day, as to how much you’ll have to pay for a car such as this…,” one Aston Martin salesperson told The Irish Times.

What kind of car is this? Well, it’s an SUV, obviously, and perhaps it’s less surprising nowadays that Aston Martin is building and selling such a car than once would have been the case. The company’s chief executive, Andy Palmer, knows that Aston needs the revenue stream from a big-selling SUV, especially if he is to find the new investment that the sports car maker needs. Setting up a big, new factory in Wales to build the DBX is arguably a vote of confidence in the oft-troubled company’s future, but it’s also an expensive investment, and more cash is now needed.

Indeed, Aston Martin has announced its second profit warning in six months, with profits for 2109 expected to be in the region of a mere £130 to 140 million (€153 to €165 million) – a fairly paltry sum for a carmaker which is supposed to be challenging the likes of Ferrari and Porsche. That’s about half the amount the company made (in terms of earnings before the usual deductions) in 2018.

Dr Andy Palmer, former vice-president of Nissan and Aston Martin’s chief executive since 2014, said to investors that: “From a trading perspective, 2019 has been a very disappointing year. Whilst retails have grown by 12 per cent, our best result since 2007, our underlying performance will fail to deliver the profits we planned, despite a reduction in dealer stock levels. We are taking a series of actions to manage the business through this difficult period. This will include a cost-saving programme alongside a focus on returning dealer stock levels to those more normally associated with a luxury company; winning back our strong price positioning is a key focus.”

Much of that retail growth has, apparently, come from discounting sales prices, as well as increasing bonuses paid to sales staff. Aston will need to seriously build up its order books with the DBX if it is to prosper.

Will buyers flock to the DBX? They may well do. Chatting to Aston Martin’s brand ambassador and driving instructor Andy Burgess about the car, the maths seems pretty simple on the face of it. “Lots of our customers have a Range Rover, or a Bentayga, or a Urus, or a Porsche. So why not have an Aston Martin instead?” Burgess rhetorically asked The Irish Times. “So that’s Andy Palmer’s idea, to bring in this extra revenue stream, but without just creating a box on wheels like everyone else has.

Is that bandwagon trundling to an agonising halt, though? While SUV sales continue to rise, and super-luxury brands such as Rolls-Royce, Lamborghini, Bentley, and even Ferrari continue to pile on, legislators and agitators worldwide have the biggest, most profligate cars firmly in their cross-hairs. City centre bans have been spoken of in Germany, and surely given the climate crisis we cannot much longer go on allowing such hefty, wasteful behemoths?

Burgess is not so sure, and reckons that actually Aston is hitting the market at the right time. “Everyone who sees it says it’s the prettiest SUV they’ve ever seen. It certainly handles better than anything else out there. We used the Porsche Cayenne as our benchmark, and we feel that it’s better than that. Coming later to the party is probably good for us because we’ve seen what everyone else has done, and we’ve come in and done it better, we think. The people we’ve spoken to about the DBX have all said the same thing – they want an SUV that’s pretty, not boxy. So that when you park it in Waitrose you want to look back at it.”

The DBX is certainly striking. It’s lower slung than most large SUVs (around 200mm shorter than a Range Rover) and that broad winged-grille at the front, and the rear end that deliberately references the styling of the Vantage sports car creates a very distinctive look. Aston claims that it’s used the ‘golden proportion’ of one third glass to two-thirds body, and it does seem to work. For a car that is the same overall size as the hulking Bentley Bentayga, and which has a 632-litre boot (best in class, claims Aston) the DBX does look very sleek indeed.

It doesn’t feel especially roomy inside, though. Legroom and headroom are generous in the back, but the front seats feel oddly cramped and narrow, while the centre rear seat is too narrow for any serious passenger-carrying capability. Effectively, this is a four-seater.

Under the skin there’s a new aluminium platform, related to that used by the DB11 and Vantage coupes, but extended and beefed up for SUV duties. The running gear comes from Mercedes – the two companies have had a reciprocal arrangement for some time now, and Mercedes owns a small stake in Aston Martin. The 4.0-litre, twin-turbo V8 engine is lifted from various AMG models, and in the DBX develops 550hp and 700Nm of torque. There’s an active sports exhaust for an appropriately sporty soundtrack, but there’s also cylinder shutoff to help save fuel – even a plutocratic Aston Martin SUV must pay heed of environmental needs.

Performance is pretty impressive – 0-100km/h in 4.5 seconds, and a top speed of 291km/h, although those figures are slightly behind the benchmark Porsche Cayenne Turbo S. The Aston should be impressive through the corners, though. It uses a combination of air suspension, an active anti-roll system, and an electronic rear differential that can shunt engine power from one rear wheel to the other. That air suspension can also drop the car down on its springs to make getting in and out a little easier. Aston has even made sure that the DBX is a good towing machine, wind-tunnel testing it with a trailer, carrying a classic DB6, hooked up behind.

To ensure that all occupants enjoy equal luxury, there’s even an optional dog pack that includes high-end blankets and a rear bumper protector, to keep those scrambling claws away from your paintwork. Or you could go for the ski pack, which comes with ski boot warmers included.

There’s no electric powertrain, yet. Originally, the DBX was shown as a concept car with all-electric drive. For now, all Aston Martin will officially say is that the revived Lagonda brand (long a dormant part of Aston Martin) will be the torch-bearer for electric power within the company. Unofficially, one Aston Martin executive told The Irish Times that: “There is something coming later on, which the DBX might adopt, but it’s not official yet.”

One can’t help but feel that Aston might have missed a trick launching the DBX with only a big, thirsty V8 engine in a world that’s rapidly waking up to the clear and present danger of climate change. An electric DBX would have, possibly, made headline news. Certainly, given Tesla’s inflated share price, it might have been a more useful tool in seeking that much-needed new investment. As it is, this rather gorgeous large, luxury SUV seems for now more like a footnote, albeit a delectable one, to the story of the luxury brand.

UK pricing starts at £158,000, and it has been suggested to us that around £178,000 will get you one with optimum spec. That would indicate a roughly €340,000 Irish price tag, imported. We might need another housing boom or three before we see too many DBXs on Irish roads.

Will it be enough to save Aston Martin? Possibly, but then one must take any current shortcomings in the bottom line in the context of the fact that, prior to it being taken over by Ford in the 1980s, Aston Martin had previously only turned a profit in one single year since its inception in 1913. Even if the DBX sells in significant numbers, though, surely Aston Martin cannot much longer survive out from under the wing of a major carmaker? Porsche, Lamborghini, and Bentley are all cosseted by membership of the VW Group, while Ferrari is only semi-independent from Fiat. Lotus is now owned by Geely, which also owns Volvo. Aston is currently 5 per cent owned by Mercedes-Benz – will the German stake soon have to be higher than that?

I was Ann Lovett’s boyfriend
10