French carmaker’s stylish new offering delivers both inside and out 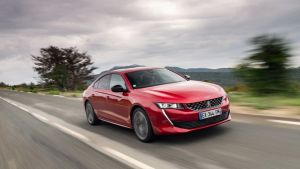 There’s something incredibly annoying about the fact that car companies are only now adding the much-needed spice into the mid-sized family saloon car market.

As consumers abandon the three-box format in favour of high-set crossovers, the well-paid design gurus and engineers at the big brand car companies are finally delivering some great looking saloons (although technically, this is a fastback).

While we’re delighted to see them, it does beg the question: why the hell didn’t they do this back when saloons had a fighting chance of fending off the SUV invasion? Where was the Kia Stinger, the VW Arteon or this new Peugeot 508 when we really needed them? Instead we had decades of dull tweaks. No wonder the public was tempted to jump ship.

As much as I love the look of the new 508, with its muscle car menace and premium quality interior, as the week wore on behind the wheel, I couldn’t help thinking that previous Peugeot saloon buyers should have enjoyed at least some of this attention to detail. Like an athlete who delivers a record lap after several mediocre performances, it raises questions about consistency as much as congratulations.

The frustration with the new Peugeot is derived from the fact that this is a really good car. Following on from the award-winning 3008 crossover (with which it shares its underpinnings) and the larger 5008, it would seem like Peugeot has finally got into its stride again.

On the outside the 508 looks like a proper coupé, with a profile that would do Audi proud. Inside the cabin is largely lifted from the award-winning 3008 and 5008 crossovers, which is no bad thing. Due to its coupé lines there is a little sacrifice to be made in the back, in terms of entry and exit due to the swooping c-pillar, but it’s a price worth paying.

Arguably the most alluring feature of the latest wave of cars from the French group, this family interior styling has become the staple reference point we send people to consider when they question the inclusion of a Peugeot on a potential new car shopping list. Despite the stereotypes, French car companies can do tech.

The digital instrument display adjusts to a variety of layouts and can be personalised to such an extent even a techie teen may be impressed by its features (well, for 10 seconds).

One swish new feature on our test car was the night vision system. It’s pricey, coming in at over €1,500, but its clarity at identifying pedestrians and cyclists in the dark was really impressive. Not only that, but it doubled as a useful way to tell which winter jacket is best for keeping in the heat.

We spent the week in the high-powered 225bhp version of the 1.6-litre petrol, but it is likely most buyers will opt for the 180bhp version. And they are probably right. The €8,000 price walk may deliver 45bhp more, along with full GT specification like leather-clad seating and active suspension control, but the reality is that the GT line is more about aesthetics than outright sports car performance. The active dampers make a difference in only the most testing conditions and for all its sleek looks, the 508 always feels like it’s taking up a sizeable space on the road.

While we didn’t get a chance to test the new 508 without the active dampers, this car giant has a well-earned reputation for mid-sized cars with good handling, so I would have no real concerns about opting for the regular fare.

One of the biggest issues we’ve had with Peugeot saloons has been they felt heavy and bulky on the road. Both issues are addressed here, with 70kg on average dropped from the outgoing model, while the car itself is shorter and lower than before, it’s evidently not as big and bulky as rivals like the Ford Mondeo. If you wanted a benchmark, this car is far closer to the Mazda6, both in terms of sharper, sporty styling and agility.

That said, the smaller steering wheel that has become a trademark of Peugeot’s new styling may take traditional saloon car buyers a while to get used to, although it does really make the car feel more sporty.

Of the engine choices, diesel remains an option, in 1.5-litre 130bhp or 2-litre 160bhp formats, but there is certainly going to be renewed interest in the 1.6-litre petrol option. All but the entry-level diesel come with a smooth eight-speed automatic transmission. The main qualm with the transmission on the 225bhp version was that it seems to have to work harder than it wants when you kick down to put the engine through its paces. Big-mileage motorists will opt for the diesels, but if you spend time around town the petrol doesn’t prove as thirsty as you might suspect.

According to my colleague who attended the international launch, there was talk of this being a rival for the likes of the BMW 3 Series, but that’s a step too far. Pricing, though is quite high and while it starts at €32,400 for the 130bhp diesel, the average spend is probably north of €35,000. Our top-level GT test car was in the nose-bleeding heights of €49,310.

Ultimately the 508’s coupé looks might carry some menace but even with 225bhp under the bonnet, it doesn’t really roar.

It’s a safe bet to presume a high-performance variant is in the pipeline, but for now this Peugeot’s biggest merits are in terms of styling, comfort and a swish tech-friendly cabin.

Those are strong enough merits to warrant serious consideration by the remaining members of the mainstream saloon buying public. It might not lead its class when it comes to driving pleasure or competitive pricing, but it’s a very tempting proposition and yet more evidence that the French brand is becoming a really serious player again.

Verdict: Peugeot puts it up to the Germans with a mid-sized coupe that delivers both inside and out.

Is this the beginning of the end? Who knows, but general practice is open
10