Car makers are investing billions, but Deloitte says that the market’s not ready for mass electrification 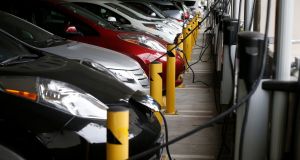 Car makers could be looking down the barrel of massive oversupply of electric vehicles in the market. According to a new report from Deloitte, a “significant expectation gap” is growing between the production ramp-up of electric vehicles by the world’s major car makers, and the actual serious sales prospects for those vehicles.

The report says that 2018 was something of a breakthrough year for electric cars, with more than two-million such vehicles sold worldwide. Deloitte claims, though, that industry projections for that number to grow to 35 million sales by 2030 could well be wide of the mark, and could put many more electric vehicles into the market than buyers are prepared to accept. That could then lead to oversupply, discounts to shift slow-moving stock, and a serious dent in the return on investment for those currently creating these new, costly-to-engineer, electric vehicles.

“Based on current forecasts, the number of electric vehicle (EV) manufacturers appears unsustainable” says the Deloitte report. “Indeed, it is not inconceivable that some incumbent [car makers]will be out of business by 2030 or shortly thereafter. Those that survive may face significant changes to their existing business models, with the prospect of today’s powerful companies acting as white label suppliers to other brands a real possibility.”

That possibility, where car makers essentially share and pool their EV tech, may already be dawning. In an interview with German newspaper Taggespiel, Michael Jost, head of strategy for Volkswagen said that the company is willing to share its cutting-edge new MEB electric car platform with rivals. “Regarding this area, I think that we are industry forerunners in terms of costs and scalability. Therefore, we want to offer access to the MEB, by making it available to the entire industry. This represents a paradigm shift for us.”

Jost presents this as an altruistic measure, highlighting VW’s commitment to fighting climate change: “Volkswagen is of global importance and that is connected with a global responsibility. Successfully limiting global warming to no more than two degrees is crucial for our children and grandchildren,” he said. Doubtless though, VW is also looking at the multi-billion Euro bottom line for creating the MEB platform in the first place, and reckons that selling it, even to rivals, for a healthy licence fee, could be a good way to recoup costs. Ford, which has recently inked a commercial vehicles development agreement with VW, is likely first in line for any EV tech share.

Even with such cost-savings, generating enough income from such investment-heavy tech could prove challenging. By 2030 - the year when the Irish Government has earmarked an end to internal combustion engine sales - Deloitte reckons that electric cars will still only account for 20 per cent of global automotive sales. That means not only that EV return on investment will have to be generated from one fifth of the total market, but that car makers will still have to invest heavily in the meantime in newer, cleaner, internal combustion engines that will pass increasingly tight emissions regulations.

So either electric cars are going to remain swingingly expensive (“What everyone needs to realise is that clean mobility is like organic food - it’s more expensive,” said Carlos Tavares, chief executive of PSA Group, owners of Peugeot, Citroen, and Opel, in a recent radio interview) or car makers are going to be heavily subsidising their price tags. Given the experiences of the American ‘Big Three’ car makers in the run-up to the 2008 financial crisis, when all three of Ford, Chrysler, and General Motors, were subsidising sales of conventional cars with massive discounts and incentives, and two out of three filed for bankruptcy when the economy dived) that’s likely not a viable tactic in the long term.

Of course, that ignores the potential effects of government legislation across major markets such as the EU, the USA, and China, which could push consumers more and more towards electric cars, and indeed the potential for electric car demand to grow faster than is predicted as concerns about climate change mount.

Deloitte remains unconvinced, saying that car makers’ projections of 35-million EV sales worldwide by 2030 is some 14-million more than the market will bear. “Based on our analysis, the overall industry capacity is approximately 14 million units above the forecast consumer demand for EVs in 2030. Given that today’s projections are closely linked to investment, getting them wrong can have serious implications for the industry. Based on these figures, it is not inconceivable that some incumbent car makers will be out of business beyond 2030, while it is highly likely that not all EV startups will survive.”

Deloitte suggests that the keys to success in the EV market will be building a recognised electric-only brand (look at how dominant relatively small Tesla has already become with this strategy); focusing on keeping customers happy with their purchase; and ensuring that they can secure an efficient and affordable supply of batteries from largely Asian-based battery makers.

Even taking those recommendations into account, Deloitte sees a tempestuous future ahead for the big car makers of today. “With a substantial increase in the level of EV production expected over the next decade, the number of potential manufacturers appears genuinely unsustainable,” said Deloitte’s North West Europe automotive leader Mike Woodward.

“If, as expected, supply significantly outstrips demand then something will have to give. Our expectation is that the market will find a way to normalise itself at the expense of the manufacturers.”

Protein powders: what are they and do they work?
Real news has value SUBSCRIBE