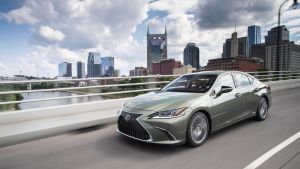 Have you found your ikigai? Have you even started to look?

Millions are tidying up under the orders of Marie Kondo, while sports fans will be paying more attention to the island nation in the next 24 months as it hosts first the Rugby World Cup and then the Olympics. By the end of 2021 I suspect most of you will know about your ikigai, even if few will have actually found it.

Like hygge, there’s no direct translation, but you know it when you see it. Basically – as it was explained to me recently – it’s your reason for being. It’s the intersection of what you love, what you’re good at, what the world needs, and what you will do for money. Find a role that intersects all four – like the centre of a four circle venn diagram – and you’ve cracked the secret of life. In fact, if you are to believe some of the latest ikigai experts, you’ve also found the secret to a long life.

What on earth has that got to do with an executive saloon? Well, Lexus is hoping it has found its ikigai in the ES, at least in Europe. There is no question now that the Japanese luxury brand has proven its premium pedigree. If you are lucky enough to spend time in the gorgeous LC performance coupe, you’ll appreciate why it deserves to stand alongside its German premium rivals. The same applies to the LS saloon and its range of crossovers. The problem has been, however, that historically the most important battleground in the premium market has been among mid-range executive saloons.

This is where the Mercedes-Benz E-Class, BMW 5-Series and to a lesser extent Audi’s A6 rule the roost. For more than two decades Lexus tried to muscle into this market with the GS. And it did a competent job, offering a well-built refined hybrid alternative to the diesel-powered German brands. Yet it never hit the mark, mainly for two reasons: buyers were fixated on diesel and the GS’s price was too high. It was too niche. Lexus sought to offer something a cut above its German rivals, but in doing so they missed the volume end of the segment.

The answer was staring them in the face all the time. The ES, you see, is not new. Sure, this car is the latest generation, but it has been on the US and Japanese market for 30 years. It’s been the best-selling Lexus saloon in the US for over 15 years. Initially based on the Toyota Camry, this meant it could be developed to enter the market at a competitive price, even with the levels of detailing required to carry the Lexus name. But still the executives pondered. No one can ever accuse Lexus of making hasty decisions.

Finally it’s taking a new tack. And the timing could not be better. The hybrid-only executive saloon has landed as Ireland’s well-heeled management class is looking to distance itself from diesel. Call it corporate PR, or conscious capitalism, but bosses who are paid multiples of their employees don’t like to be spotlighted for poisoning pedestrians on their daily commute.

What’s more, while the ES can cloak you in an eco-friendly aura, inside it’s proper boardroom leather and luxury. All this is wrapped in an exterior styling that takes several cues from the lovely LC. You get coupe lines, a stylish grille and a nice big boot – another boon as the early generations of the GS hybrid were criticised for the small space.

There’s plenty of legroom in the back, even if headroom is compromised by the sloping coupe roofline, while up front the usual Lexus wraparound array of switchgear and buttons are to hand.

That means a nice array of button controls and a swish digital binnacle, but also the incredibly annoying touchpad control for the centre screen and the silly protruding horns on either side of the binnacle.

One turns off the traction control, the other lets you choose between driving modes. Both are always in your eyeline and within a finger’s reach; neither will be used more than twice during the car’s lifetime. Meanwhile you need to meander through a mind-numbing array of menus, trying to control a jumpy mouse icon with your middle finger, just to set the sat-nav or make a phone call.

That’s an ongoing bugbear with this car brand, but in all other areas the interior is proper premium fare. There’s a level of refinement and comfort in this car that’s missing on lower and mid-range versions from its German rivals.

The ES is powered by a 2.5-litre four cylinder petrol engine driving the front wheels (the GS was rear-wheel drive), which is supported by an electric motor. The combined output is 215bhp, pitching it above the likes of the BMW 520d and on a par with the Mercedes-Benz E220d. The transmission is a CVT, but it’s not the annoying Prius version that lets the engine whine and changes too late; this one seems to mimic a regular automatic box unless asked to do something sporty. That’s when the hybrid powertrain starts to show its rough edges.

Go heavy on the throttle and like all its hybrid cousins the engine noise starts to hit the high notes – even with all that soundproof cladding – while the increase in speed takes a long time to show. The ES doesn’t deliver the sort of addictive surge we loved in the outgoing hybrid GS.

Go gentle on the throttle and the ES will reward you. One of the big boons is running costs. Even with the F Sport’s 19-in wheels the ES delivers emissions of 106 g/km with an impressive official fuel economy range of 53 mpg (5.3 l/100km). Even after some harder driving when the battery was more an extra load than a power support, we still managed to achieve an average of 34 mpg (8.3 l/100km). Those are the sort of figures that catch the eyes of fleet managers.

What deters them from the Lexus for now is that they can’t reclaim the VAT on the petrol for hybrid cars, something companies can do for diesels. It’s a sore point among the hybrid evangelists and something they continually bring up with the Government.

The big test, of course, is what the ES is like on the road, compared to the Germans. The F-Sport gets an adaptive version of the company’s new suspension set up, but the executive versions still get a revamped set of shock absorbers which promise damping that keeps the car flat when going through corners at speed. I haven’t had a chance to try it yet, but the adaptive version, while promising better body control, does seem a little stiff for Irish conditions, even out of sport mode.

The simple truth is the ES can’t match the smooth, controlled feel of the BMW 5 Series that always feels grounded and reassured, even on the tightest bends. Even the recent A6 feels more reassured when pushed closer to the limits.

But that’s perhaps not where the ES belongs. Forget about F Sport performance and look to the long-distance comfort and refinement instead.

For many executive buyers, there will be more than enough on the positive side of the ledger to make the ES the best in its class. For me it misses out by a whisker to the Mercedes E-Class and that’s down to driving style.

With the ES, Lexus might not have found its ikigai yet, but it’s come damn close.