What really made the car a star was that while it drew inspiration from the classic MGB, it came with Mazda’s famed reliability 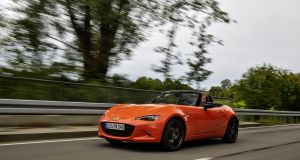 It may be better remembered for the fall of the Berlin Wall, the end of the Cold War and even the birth of the world wide web. But 1989 was a momentous year for motoring fans as well. It was the year the MX-5 arrived.

The lightweight two seater was a homage to classic sports car motoring. It featured a long MGB-like bonnet covering a lengthways engine that powered the rear wheels harking back to classic sportscars of old.

It was a brave move by Mazda. The late 1980s was not an ideal time to launch a two seater. Yet the car instantly stole hearts. It was brilliant to drive with fast and direct steering and a short throw manual gearbox that ensured the most could be made out of the petrol engine’s 115hp/135nm power.

Since 1989 the compact car has become the world’s best selling sports car with sales reaching 1 million in 2016. The millionth MX-5 to roll off the production line is on display in Japan and if you look closely you’ll see my signature along with many other motoring journalists on its boot. Yes folks, I’m big in Japan. Well, I’ve left my mark at least.

The MX-5 (known as the Miata in the US) simply caught the imagination of motorists at a time when there was little to rival it on the market. While Toyota was going down the mid-engined transverse layout route with its MR2 sportscar Mazda’s decision to go with an old school driving layout proved the right one. The first generation, with its curves, sub one tonne weight and famous pop up headlamps is now considered a classic.

What really made the car a star was that while it drew inspiration from the classic MGB, it came with Mazda’s famed reliability. Three decades later and four generations on, a special 30th Anniversary model has been launched.

The car weighs just over 1 tonne, which sounds heavy for a car this size but isn’t, and this MX-5 is as nimble as anything on the road today.

On the Autobahn it cruised with little fuss at 200km/h (top speed is 220km/h) and was very stable even in crosswinds. Roof up it is a relatively quiet cabin and with the roof down - well of course its noisy. The MX-5’s key is that it is fun at any speed, unlike many supercars that only get exciting at speeds when you can expect to see blue lights flashing in your rear view mirror.

But the beauty of the MX-5 is really on show on the twisty roads, where the car’s precision really comes into its own. A limited slip differential and Holstein shock absorbers add to the sport driving dynamic.

Little steering inputs deliver immediate results. Should you need to scrub off speed strong Brembo brakes are standard. The MX-5 is short on tech and lacks a lot of the modern advanced safety systems of your average hatchback but I didn’t miss any of them because the is wonderfully involving.

Limited edition models are to be cherished, but more importantly driven, and the 30th Anniversary MX-5 is no exception to that rule. Don’t mothball these cars. Only 10 out of a production run on 3,000 are assigned to the Irish market. Priced at just under €40,995 the car is available in classic convertible roadster guise or in RF retractable fastback form. It’s a firm fixture on my motoring wishlist.