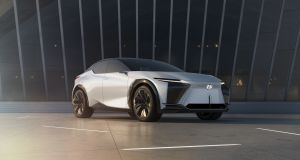 Premium brand Lexus is promising an electric future as it showcases its new all-electric LF-Z sports car concept. However, in some ways this first look suggests the Japanese brand is not seeking to be a radical pioneer in the new electric age.

Measuring in at nearly 5 metres in length, the new LF-Z features a 90kWh battery pack and claims a 0-100km/h time of just 3 seconds, with a top speed of 200km/h. The all-wheel drive crossover will have a max output of 400kW and deliver torque of 700Nm.

Lexus claims a WLTP driving range of 600km on a full charge for the LF-Z.

But it’s in design that many will look to Lexus for some steer on the future. Previously the company’s designers have delivered some divisive styling touches, which were then adopted by rivals. In hindsight it was ahead of the pack. For example, the move to large aggressive front grilles that divided opinion at the time, has now been embraced by brands like BMW.

This time, however, while the the LF-Z concept looks relatively futuristic, matched up against some of the electric crossovers already entering production, it doesn’t seem as radical as past Lexus designs.

The aggressive grille is gone, making way for a more aerodynamically-friendly solid front.

Inside the cabin is the usual array of concept car features, such as a cut-off steering wheel - unlikely to make it into production.

New tech features on the concept car include a panoramic roof made of electrochromic glass, that can be dimmed when required and has functions for privacy and illumination that reflects the night sky. to reflect the night sky. A touch panel in the centre of the roof allows front and rear occupants to communicate with each other, while the rear seats have massage and recline functions.

Other features such as smartphone key access and voice-controlled assistance are in line with what’s on offer from many other brands these days.

In some ways Lexus seems to be taking a more conservative approach to new tech advances than some rivals. There is little talk of autonomous driving on this car, while the styling could be described as smart and conventional in the new era of electric models.

The Japanese brand hitched its future to hybrid for the last decade or more, but now as part of a major revamp of its range, it is increasing its focus on all-electric models. The first has already arrived in showrooms in the form of the UX 300e, a small crossover with a 54kWh battery that delivers a range of 305km with prices from €61,550.

Now comes this new high-end sports crossover concept, the LF-Z Electrified. Lexus executives claim this car represents the start of an era for the brand. By 2025, the company plans to introduce 20 new or upgraded models on the global market, 10 of which will be hybrids, plug-in hybrids or full electric.