Frankfurt motor show: 1,000bhp from a 1.6-litre hybrid with a top speed of over 350km/h - Mercedes-AMG Project One has stats that make your head spin 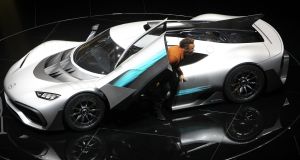 Most of what follows on Mercedes-AMG’s ground-breaking, Formula One-sourced Project One hypercar had to be heavily edited to remove involuntary potty mouth.

For example, the Project One concept car will punch from a standing start to 200km/h in six seconds. Six. That’s as long as it took me to read that last sentence and quicker than a Bugatti Chiron.

The top speed of the thinly veiled “concept” is “over” 350km/h, which doesn’t seem like much in a Chiron world, but it’s plenty once you’re there.

There’s also in excess of 1,000 horsepower, more than 740kW of system power, scrabbling at the road through and eight-speed gearbox and four tyres.

It’s tiny 1.6-litre single-turbo V6 engine crunches out more than 500kW on its own, spinning out to an 11,000 rev limit and it claims more than 40 per cent thermal efficiency.

All this, and it can drive as a zero-emission electric car for 25km when it needs to.

“The Mercedes-AMG Project One is the first Formula 1 car with MOT approval,” Daimler’s board member in charge of Research and Development, Ola Källenius, said.

“Our highly efficient hybrid assembly stems from motor racing and the electrically powered front axle generates a fascinating mixture of performance and efficiency.

“With a system output of over 1,000 hp and a top speed beyond 350 km/h this hypercar handles exactly as it looks: it takes your breath away.”

Interestingly, Kallenius held the Chairmanship of AMG before handing the reins to its current boss (and his former head of AMG engineering), Tobias Moers.

For the lucky few on the list with USA$2.54 million to spare, they’ll have to understand the fully stressed engine and eight-speed transmission combination will have to be taken into AMG every 50,000km or so for a full tear-down and overhaul.

Before that, though, they’ll be running through a number of driving modes, from full electric to what AMG calls its High Dynamic Mode for setting the fastest lap times.

Just like the dominant Mercedes-AMG Formula One engine, the Project One’s powertrain has a split turbocharger, a 120kW electric on the turbo itself and another one on the crankshaft. Then there are another two smaller electric motors to drive the front wheels.

So it has one hyperactive little V6 and four electric motors.

The mid-mounted V6 is largely similar to the Formula One engine, using pneumatic valves to cope with the higher revs, its four overhead camshafts are driven by spur gears and its rev limiter is mostly to keep it safe on pump petrol.

The electric motors themselves spin at up to 50,000rpm, which is more than double the current standard of 20,000.

Just like in the engine that broke the mould for Formula One, AMG has separated the exhaust and compressor turbines to keep the inlet air as cool as possible. The MGU-H (it’s Formula One speak for Motor Generator Unit - Heat) sits on the turbocharger’s connecting shaft, spinning the compressor wheel at up to 100,000rpm.

“The Hypercar is the most ambitious project we’ve ever made,” Mercedes-AMG Chairman Tobias Moers insisted.

“This marks another highlight of the successful strategic development of Mercedes-AMG as a performance and sports car brand.

“The Project One puts the benchmark of what is currently technically possible at a new level and, with its combination of efficiency and performance, represents the absolute benchmark.

“At the same time, Project One provides an outlook on how AMG defines driving performance in the future,” he said.

The fast-spinning MGU-H technology moved Moers to claim the Project One will have better throttle response than a naturally aspirated engine, with the electric motor boosting the turbocharger.

Built at Mercedes-AMG’s High Performance Powertrains unit in Brixworth, England, the powerplant can recuperate up to 80 percent of the energy on throttle lift off. The MGU-H takes excess energy from the exhaust and either stores it in the lithium-ion battery or sends it around to the crankshaft’s 120kW electric motor to deliver more urge.

The car is effectively all-wheel drive, with another two 120kW electric motors on the front axle, giving it full torque vectoring to each individual wheel.

It can also recuperate up to 80 percent of its braking energy, with each electric motor having its own floor-mounted power-electronics unit.

“Motorsport is not an end in itself for us,” Daimler’s Chairman, Dr Dieter Zetsche, explained.

“Faced with intense competition, we develop technologies from which our production vehicles also subsequently benefit. We are drawing on our experiences and successes from three constructors’ and drivers’ world championships to bring Formula 1 technology to the road for the first time: in Mercedes-AMG Project One.”

AMG isn’t keen to talk about the details of its batteries, which have the same arrangements and cooling systems as the Formula One car, but there are four times as many of them.

The car’s EQ Power + electric drive system runs at 800 Volts, instead of the more usual 400 Volts, to shrink the cable cross sections.

The eight-speed manual transmission is based around the Formula One unit, but has been heavily redesigned for road use. The hydraulically actuated gearbox can do its own shifting or change gear via steering wheel-mounted paddles.

The pushrod, mutli-link suspension systems bolt directly onto the carbon-fibre chassis tub, but it’s more complicated than that. There are two coil-over systems sitting horizontally at each end, and the pushrod sprints struts eliminate the need for a stabilizer bar. It’s designed to deliver comfort, but to eradicate rolling movements in quick direction changes.

It retains ABS, while its ESP has three stages, including off.

There’s a partial carbon-fibre cover for the forged aluminium centre-lock wheels and each of its 10 spokes has three slots to extract heat from the brakes.

The wheels and tyres fill up the arches on a sleek, brutally efficient show car, with AMG claiming very little of the forward-cockpit car is designed for show and almost all of it for speed.

“The Project One is the hottest and coolest car we have ever designed,” Daimler’s chief design officer Gorden Wagener said.

“It combines our design philosophy of Sensual Purity with the performance of our Formula One racing cars and is the perfect embodiment of Performance Luxury.

“This hypercar’s extreme design marks a milestone in design there are no lines, and the interior is stripped down to the essentials.”

The F1-inspired Project One’s bodywork has a long rear end and a front splitter that automatically extends at speed, while the air intake for the engine is mounted on the cabin roof.