Stylish, comfortable and superb to drive, could the Audi e-Tron Sportback be a watershed moment for the electric car industry? We took it for a test drive to find out. Video: Neil Briscoe 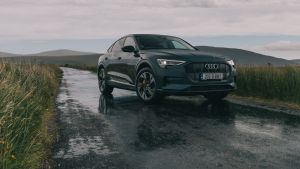 The idea of chopping the roofline of a car is nothing new. It dates back to the earliest days of the hot-rod scene in the United States where back-yard modders would take a humble Ford Model A and, by means of saws both chain and hack, take the roof down several inches for a racier, more menacing look.

Done properly (and a Google image search for the Dr Seeley Mudd 1932 Duesenberg is your friend here) it can look truly wonderful.

More recently, though, the process of chopping has become muddied, hijacked, even ruined by carmakers applying it to SUVs. BMW was the first out of these malodorous starting blocks with the original X6. Basically an X5 that had been given the same treatment as those Ford Model As, it looked (and still looks) awful, a dreadful example of what late-cycle capitalism does to car design. Further explorations of the idea by BMW (the X4 especially) and Mercedes have done little to dispel the thought that when it comes to SUVs, chopping is a bad idea.

Yet, here comes Audi with its e-Tron quattro electric SUV and blow me down if Ingolstadt hasn’t done a beautiful job of chopping the top. I mean, the basics of this e-Tron Sportback’s design aren’t fundamentally different to that of the X6 or Merc’s GLE Coupe – you take what was boxy and slice it in something more angular and theoretically more sporty. But where BMW and Mercedes made a hash of it, uglifying their cars, Audi seems to have managed to make the e-Tron even prettier in Sportback form than as a “conventional” SUV. One colleague likened it to a bulked-up, butched-up TT coupe. Personally, I think it looks more like an A6 saloon that’s been stretched upwards, and I mean that kindly.

Once you get past the styling, there’s not much about the Sportback that’s fundamentally different to the regular e-Tron. The same batteries. The same electric motors at either end providing “quattro” four-wheel drive. The chopped roof must be naturally more aerodynamic, too, as Audi quotes a fractionally longer one-charge range on the WLTP test than for the boxier e-Tron – between 373 and 452km for this “55 quattro” Sportback, as opposed to 369-440km for the e-Tron.

What does 55 quattro mean? It means that this is, currently, the sportiest e-Tron you can buy, with 360hp from its two electric motors in normal running, and a temporary peak of 407hp in “Boost” mode. The fractionally lesser “50 quattro” model gets a mere 312hp.

The higher power output means that this 55 Sportback will scamper to 100km/h from rest in just 5.7 seconds in Boost mode. Well, assuming that something which weighs 2.5 tonnes. Actually, the Sportback manages to mostly disguise that weight pretty well. It never feels anything less than the traditionally heavy-footed Audi (rather like a first-generation A7 in fact) but you will feel the inertia of all that tonnage when eking out the last shred of performance from the brakes or when tackling fast but tightening corners. Mind you, the clever adaptive air suspension – which can alter the ride height by as much as 76mm depending on what you’re asking the Sportback to do – takes much of the sting out of the car’s mass.

Those brakes are pretty clever, too – Audi claims that the brakes (more accurately the ability of the electric motors to slow the car in the initial phase of braking) are so efficient at regenerating electrical energy from kinetic motion that they can add as much as 30 per cent of the range of the car in a given journey.

Certainly, there’s little range anxiety to the Sportback. You should easily achieve that lower 373km range figure, even when doing long motorway runs (something at which the Sportback, with its comfort and refinement, utterly excels). The slightly hefty electrical consumption of 25.8kWh per 100km reminds you of that weight, though.

One major bonus of the Sportback is its charging system. The connectors are hidden behind little powered flaps in each front wing, a Type 2 (slow charging) connection on the passenger side, and a CCS (fast charging) one on the driver’s side. Plugged in to one of IONITY’s (the charging conglomerate funded by Audi, VW, Porsche, Ford, BMW, Hyundai and others) 350kW rapid chargers, the Sportback inhaled a full load of its electric fuel – from 16 to 100 per cent charge – in about 40 minutes. I think that’s the best single charging experience I’ve ever had, Tesla included.

Inside, the cabin is largely lifted from the A6 and A7, so its familiar even if the two-screen layout for the infotainment and heating can be too fiddly for its own good at times. Quality is close to perfect, though. Space is also good – there’s a massive 615-litre boot, which unusually for a four-wheel drive electric car has some extra storage space under the boot floor.

Legroom in the back is of the stretching-out variety, but while headroom is fine, especially considering the lower roofline, there are times when this bulky, tall SUV can actually feel a touch claustrophobic – the way the roof sweeps down to meet the top of the windscreen can, on rising and falling roads, create a bit of a letterbox effect. Not a dramatic problem, but worth considering.

Also on the annoying list are the fiddly steering wheel buttons, but the cabin makes up for such foibles at nigh when with the soft blue glow coming from the ambient lighting, and the gentle whoosh of the electric motors propelling you forward, it all becomes a bit Starship Audi-prise.

Oh, one final obstacle – the price tag. The one we’re testing retails at a whopping €113,903 before grants and VRT rebates. That’s a big old chunk of change, even if most rivals are pitched at around the same level. Still, there’s hope for us who haven’t had a Lotto win.

Audi will, in 2021, launch a smaller Q4 e-Tron – with an inevitable Sportback model too, of course – which will be pitched at a far more affordable level. Maybe then a few more of us can buy in to Audi’s tantalising electric update of 1930s hot-rod culture.

*Prices quoted not including grants or rebates