Mach E will arrive in Ireland next summer with prices starting at €50,000 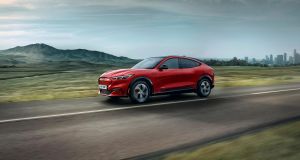 Ford’s new all-electric model will be sold online directly to customers rather than through dealerships.

It’s a big move by the blue oval brand, timely given the focus on online sales due to the Covid crisis. While customers can go for test drives and collect their new Mustang Mach-Es from dealers, the major sales pitch and the deal will be done online.

Arriving in Ireland next summer with prices likely to start at €50,000, it’s arguably the most important Ford for a decade and not just because of the way it is going to be sold.

Billed as an all-electric Mustang, the Mach E is an SUV-styled crossover rather than a muscular sports car. The crossover format is more suited to electric cars, as has been proven by a host of recent arrivals. It also offers a much-needed fillip to the brand’s crossover range. But it’s sure to put a few noses out of joint amongst the fundamentalist Ford Mustang fanbase.

The US car giant’s engineers are well aware of the sensitivity of naming this new electric model after the galloping Ford, yet they are well-practised in delivering the patter about this being a landmark new car for the Blue Oval and well able to bridge the gap between rasping V8 and whirring battery-powered electric motor.

To put that in context, next year will also see the arrival of the Mustang Mach 1. This new benchmark for traditional Mustang performance – ready for track racing – is powered by a 5-litre V8 delivering 453bhp and 529Nm of torque. According to its marketing message “the Mach 1 is a serious Mustang meant for those who are serious about performance”. Doubtless these serious buyers will not be too impressed being outpaced by an electric family crossover.

The electric Mach E arrives in 2021 with two battery options: a 68kWh standard range version or the larger 88kWh extended range version. These power a rear-mounted motor, with an additional front motor for all-wheel drive versions. And for those who want to tow, there will even be the option of a hitch. On a Mustang. The revolution is truly underway.

But there is more to tech to the Mach E than the power supply or the 15.5-inch touchscreen that dominates the dash and controls everything but the volume, for which there is a reassuringly large dial at the bottom of the screen. This car also features a host of new software features from Ford, most of which will allow the car to be updated and improved remotely during its lifetime. Software upgrades will be landed on the car while it’s parked up on your driveway.

One new feature that’s very relevant to the range is Intelligent Range. The engineers claim it more accurately estimates remaining driving range based on past driver behaviour and forecasted weather conditions – even taking advantage of cloud-connectivity to predict how much energy will be used in future driving. Crowdsourced data from other connected Ford electric vehicle customers who choose to share information can improve estimates considerably, they say. A host of other features that sync your phone to your car are on offer, though the “phone as key” facility will not be available in Ireland or the UK.

When it comes to recharging, the Mach E can take up to 150kW from the likes of the Ionity fast chargers. So Ford estimates that for a rear-wheel drive Mach E with the 88kWh battery pack, an extra 119km can be added with about 10 minutes of charging.

Ford claims it has tuned the Mach E’s driving dynamics to suit the needs of European drivers. According to Geert Van Noyen, manager of Vehicle Dynamics at Ford of Europe: “The fact is the roads and surfaces are different in each region of the world, and sometimes driving habits and expectations of customers are slightly different between those regions as well.

“European customers typically spend a lot of time on rural twisty country roads but also on very smooth motorways and often at very high speeds. We have been tailoring the Mustang Mach E on those type of typical European roads. We’ve been adjusting the springs, the dampers, the rollbar, the calibration of the electric power steering system to make it fit to those specific road conditions. Another advantage of the set-up of this vehicle is the high-speed stability, which is very crucial on the German motorways.”

Van Noyen and his team believe the mix of acceleration and stability will appeal to European drivers, but also globally. “If there is just one thing globally that we wanted to achieve with this electric vehicle, it’s that it deserves the Mustang logo on it – and it does,” he says.