Whether plugin-hybrids are good, bad, or indifferent, the updated 5 Series is a class act 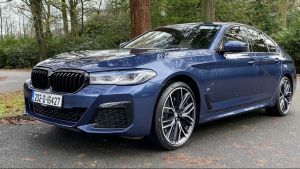 Right, it’s time to hitch up my big-boy pants, and wade into a deep, murky, bog of controversy. That controversy is, of course, that surrounding plugin-hybrids and their inherent evilness. I mean their semi-electric saintliness. I mean their . . . look, it’s complicated, alright?

You see, lately plugin-hybrids have come in for quite the barrage of criticism. Some, including august environmental think-tank Transport & Environment, have derided half-electric, half-petrol cars such as this 530e, as “fake electric cars”. A somewhat Trumpian turn of phrase, but it’s meant to be shorthand for plugins that don’t live up to their billing in the real world. The issue that Transport & Environment, and many others, have is that it’s too easy for a plugin-hybrid, or PHEV, to be sold on the basis of its low-low laboratory CO2 figures, but driven without ever being plugged-in nor charged up.

Even in the freezing cold of this past week, and with two school-aged children and a lanky greyhound on board, the battery range still held up okay

The problem is specific to one component – the driver. You see, while the claims of 1.7-litres per 100km and 41g/km of CO2 emissions made for this 530e might look like bunkum on the page, the thing is that they can, could, might be reality with a little effort on the part of the driver. All you need (“all” being a relative term here) is a driveway or some other form of off-street parking to which you can fit a charging point.

If you have such, then you can regularly charge up the 530e’s 12.5kWh battery pack, and make fullest use of its claimed 51km (and realistic 40km) electric-only range. Okay, so that range will fluctuate, and dramatically so, depending on how many people and objects you’ve crammed into the car, how rapidly you’re driving it, and what the ambient temperature might be. Mind you, even in the freezing cold of this past week, and with two school-aged children and a lanky greyhound on board, the battery range still held up okay.

Ah, but the rub, as claimed by the anti-PHEVers, is when you drive it without a charged battery, with the battery fully depleted, in fact. Then, the car’s emissions and fuel economy can be so much worse than claimed, and actually worse than a conventional petrol or diesel model which isn’t having to lug around the dead-weight of that battery.

Actually, though, the 530e held up pretty well in that regard too. As regular readers will know, I have a problem charging EVs and PHEVs because I live in a terraced house, and can’t get a home-charger. I’m reliant, then, on the sparse and often unreliable public charging network, so when I test a PHEV, I’m usually testing it in the worst case scenario.

Even then, the 530e returned a relatively decent 6.0-6.5-litres per 100km, or around the 45-47mpg mark. Or, in other words, about the same as I’d get from a similarly-sized, non-plugin Toyota Camry, and I don’t see anyone surrounding Toyota dealerships with pitchforks and torches. Indeed, running mostly on a flat battery (which charges up a little at a time as you coast and brake) the 530e recorded that I still completed around 115km of battery-only distance, during five days and about 450km of driving.

That’s surely not bad. Around a quarter of my mileage, done on electric power. If we could all reduce our emissions by a quarter, wouldn’t that be a good thing? True, at one point (on one especially freezing morning, with the demisters, and heated seats and steering wheel going full blast) economy dipped on one journey to 8.0-litres per 100km, but that seems to have been an outlier.

The 530e remains a wonderfully involving car to drive

On top of which, had I been able to top the battery up more regularly, I could have dramatically increased the ratio of electric miles to petrol miles. And that, I guess, is the point – could have. Should have, arguably. The thing is, it’s down to you, to me, to the end user to actually take a PHEV and use the PH part. There’s little point in hurling Trumpian brickbats at the cars themselves.

Speaking of the car itself, the 5 Series – which has just been given a major mid-life update – is still a remarkable car. It’s moved a little closer to the Mercedes-Benz E-Class and Audi A6 in terms of comfort. I cannot think of any other car I’ve driven on 20-inch rims that is quite so cosseting. For all the extra comfort relative to 5 Series of old, it remains incisive and entertaining to drive, with a lovely patter of feedback through the steering wheel, and poise aplenty when the road turns to challenging. The only dynamic demerit I could detect was a faint shudder through the bodywork over some surfaces, almost as if the track was slightly too narrow for the body, but most likely a result of those 20s stretching the capability of the suspension to its limits. Even so, the 530e remains a wonderfully involving car to drive.

The cabin’s rather lovely, too. The digital dials will divide opinion (for the most part I like them, but they are a little fussy) but the quality, the ergonomic layout, and the simplicity and effectiveness of the iDrive infotainment system are all beyond reproach. It’s even tolerably roomy (although noticeably less broad across the cabin than the Audi A6) but the boot has been filleted by the electrical installation, shrinking by 120-litres to a less-than-stellar 410-litres, and with an awkward lip in the floor. All the more reason to buy the even more handsome Touring estate.

That feels like I’m picking nits, though. Maybe instead I should just revel in a classical BMW, one that has not succumbed yet to the recent vicissitudes of the styling department, one that retains that old “ultimate driving machine” feel, and one that – potentially – can make a big dent in your day-to-day carbon footprint. As ever, it’s not the bullet; it’s the finger that pulls the trigger.