Twin Test: The Swedish and German cars look like peas in a pod, but they’re not

Volvo's XC40 T5 looks like an SUV should, and its hybrid set-up offers plug-in versatility. The Volvo offers a neutral Swedish alternative to its German-badged rivals and is relatively environmentally friendly for an SUV. Video: Neil Briscoe 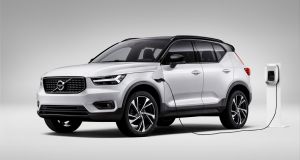 It’s a measure of just how far Volvo has come in the past two decades that at one time a twin-test such as this would not have been a runner. A new BMW, especially one bristling with cutting-edge technology, would have trodden all over any contemporary Volvo. The Swedish brand – nowadays with Chinese backing – has, however, pushed itself into contention with the “big three” Germans. A combination of attractive styling, decent dynamics, lovely interiors, and all without ever losing that traditional focus on safety has seen to that.

Seriously, though? Can Volvo, even now, make a better plug-in hybrid than BMW? The same BMW that, in the shape of the delectable i8 sports car, made the best plug-in of them all, hands down? The same BMW, once the meister of the six-cylinder engine, that’s now rapidly gearing up to challenge the dominance of Tesla in the electric sphere? It once would have seemed unlikely, yet here we are . . .

The technical specifications of the two cars, the Volvo XC40 T5 Recharge and the BMW X1 25xe, are almost ludicrously close. Both have 1.5-litre, three-cylinder turbocharged petrol engines (which are, equally identically, based on 2.0-litre four-cylinder turbos). Both back that up with a compact electric motor, developing either 82hp (the Volvo) or 95hp (for the BMW). Both have a stack of lithium-ion batteries, the BMW’s holding a 10kWh charge, the Volvo’s slightly more on 10.7kWh.

Actually, the two do start to diverge a little after that. The BMW has the Volvo well beaten for range on a charged battery: a claimed 57km (and a realistic 45km) compared to a claimed 46km (and a realistic 35km) for the Volvo. The BMW, unlike the Volvo, is also four-wheel drive, as its electric motor powers the rear wheels, whereas power from both petrol and electrons goes to the front wheels in the Volvo.

The Volvo does have rather more power, though, with its 262hp figure justifying the use of that T5 badge. The BMW has 220hp, and that does show up on the road. Flick the BMW into Sport mode and it does kick hard, accelerating from 0-100km/h in 6.9 seconds. The Volvo is actually behind on paper, taking 7.3 seconds for the same sprint, but feels more muscular on the road. It also feels quicker in its supposedly fuel-saving “Hybrid” engine mode, whereas when you switch the BMW into its “Eco Pro” mode, there’s no mistaking its economy-minded progress.

The Volvo is also ahead in terms of how it operates as a hybrid. One of our regular complaints about plug-in hybrids is that, once you’ve depleted the battery and run out of electric-only kilometres, they can be way too thirsty when driving them around – for want of a better world – “normally”. Rather pleasantly, the Volvo bucks this trend. While it can get a touch thirsty if you make full use of that 262hp, drive it with mild intent and it can return a diesel-like 5.8 litres per 100km on a long run. The BMW, rather disappointingly, hit 7.3 litres per 100km on the same journey, and remained stubbornly stuck there.

Looking at them, you’d swear that the opposite would be true because the Volvo looks, in the grand tradition of the brand, like a streamlined brick. Look closer, though, and the details really shine through. The highlighted “Thor’s hammer” shape in the headlights. The subtle Recharge badge on the rear pillar. The pleasing blockiness of it all.

Compared to that, the BMW looks a little gauche. There’s no mistaking the appeal of the badge, but the X1 is not a good-looking car, something that not even the rather lovely “Storm Bay Metallic” grey paint can help. The lines and the angles are just fundamentally awkward. It’s like comparing the handsomeness of Alexander Skarsgård to a Berlin businessman.

The Volvo pulls out an even bigger lead in the cabin. The BMW’s inside is well-made, tolerably spacious, and in a rather predictable sense looks fairly good. It’s traditionally Germanic: lots of dark, contrast-stitched leather and machined aluminium, with some subtle mood lighting. The Volvo’s cabin has, by contrast, been designed by someone who wants you to be comfortable and warm. There are strips of incredibly tactile open-pore wood, and soft surfaces clad in brown, not forbidding black. The insides of the (incredibly roomy) door bins are covered in what appears to be genuine Muppet hide, all softly fluffy and welcoming. Volvo even does crystal gear selectors better than BMW – its Orrefors crystal gear stick looks and feels classy, whereas the ones you find in higher-end Beemers look like rejects from a Swarovski catalogue. The Volvo also has better digital instruments than the German car, although it’s about honours-even when it comes to the big infotainment screens.

How are they like to drive? Heavy. There’s no getting away from the fact that batteries add mass, and a considerable amount of it. The Volvo weighs 300kg more than a basic petrol model; the BMW is a little lighter, but still hauling around an extra 200kg. That doesn’t affect straight-line performance too badly, and actually both cars manage to disguise that bulk pretty well through corners – but you’ll feel it in the ride. Both are much more firmly sprung than their petrol or diesel equivalents. Actually, out on the open road, while the BMW has more rewarding steering, and much more consistent brake pedal feel as it switches from regenerative to actual, physical braking, the Volvo once again pulls ahead just by being more pleasant, more refined, and by having an airier cabin (aside from the blindspot-creating sharp angle in the rear side glass).

So, in a contest that would have been impossible not so long ago, in a struggle between two cars that would not have existed at all in that same time-frame, it’s the underdog that wins. BMW has done an impressive job to make the X1 as good to drive as it is, but the Volvo is streets ahead in terms of cabin design and space, exterior styling, real-world economy and general likeableness.