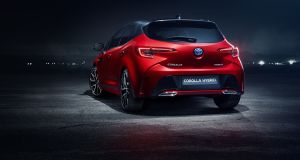 Toyota is to replace the Auris name on its popular family hatchback in favour of the long-established Corolla moniker. It means the salooon, hatchback and Touring Sport (estate) variants of the next generation of Toyota’s mid-sized family models - due here next year - will all fall under the Corolla name.

It marks a reversal in the firm’s marketing strategy. The Auris name first appeared on hatchback and estate models sold in Europe in 2006 in an effort to give them a more modern image, while the saloon retained the Corolla name, first introduced in 1966.

However, the two-name strategy meant Toyota’s mid-sized family car range was no longer listed among the best-selling cars alongside the likes of the Ford Focus or VW Golf. The decision to return to a single name will mean Toyota will be vying again for the title of best-selling car in European markets from next year.

The new Corolla hybrid range will be joined on Toyota forecourts next year by a new RAV4 hybrid SUV and the much anticipated return of the flagship Camry hybrid saloon.

It’s part of what Toyota has billed as its hybrid “invasion” of 2019, underlying the car giant’s commitment to no longer sell new diesel passenger cars from next year, but offer a full range of petrol-electric hybrid models to motorists.

The introduction of the first Corolla hybrid underlines how quickly hybrid technology has moved into the motoring mainstream.

There has already been a dramatic shift in Toyota sales towards hybrid. In 2016 hybrids accounted for 12.3 per cent of the car firm’s Irish sales, while so far this year they make up nearly 52 per cent. In contrast diesel sales for the brand have slumped from 56 per cent to less than 17 per cent in the same period. The company confirmed in March that it would cease production of diesel passenger cars.

Hybrids currently enjoy vehicle registration tax (VRT) relief of €1,500. Michael Gaynor, Toyota Ireland marketing director, told The Irish Times that any moves in the budget to reduce or remove this would be a major step backwards in terms of environmental policy and efforts to encourage motorists to move away from diesel.

The new Corolla hybrid hatchback will arrive in Ireland in January followed by the saloon in February. The saloon will be available with either a 1.6-litre petrol or a 1.8-litre petrol-electric hybrid powertrain. January will also see the arrival of the new RAV4. The new Camry will arrive in April, with orders already underway.

The first public appearance of the extended Corolla range will be the new Touring Sports model to be unveiled at the Paris Motor Show in October. Prices and grade level information for all models of the new Corollas are due to be released on October 18th.

According to Steve Tormey, chief executive of Toyota Ireland: “We’re anticipating that there will be a huge demand for the new Corolla Hybrids, not only from loyal customers but from a new cohort of fans.”

Pontifacts: All the papal questions you never thought to ask
10