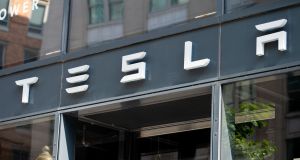 Slashing its price target for Tesla from $308 to $195, JP Morgan Chase said it did not believe Elon Musk had the funding for a plan he announced on Twitter. Photograph: Saul Loeb/AFP/Getty Images

Tesla was hit on Monday after analysts at JPMorgan slashed their price target for the company’s shares, arguing that financing for a deal to go private has not been finalised despite Elon Musk’s claim that the funding had been “secured”.

In a note, JPMorgan analyst Ryan Brinkman lowered his price target by more than a third to $195 (€170). That had been his target before he raised it to $308 on August 8th, the day after Mr Musk said in a tweet that he had funding to take Tesla private at $420 a share.

The JPMorgan reversal highlights legal questions around whether investors were misled by Mr Musk’s August 7th tweet, which stated: “Am considering taking Tesla private at $420. Funding secured.” Shortly afterwards, Mr Musk also tweeted: “Only reason why this is not certain is that it’s contingent on a shareholder vote.”

Mr Brinkman wrote in his note: “We are reverting to valuing Tesla shares on the basis of fundamentals alone, which entails a $113 (€98.62) reduction in our price target back to the $195 level where it stood before our August 8th note.”

“Our interpretation of subsequent events leads us to believe that funding was not secured for a going private transaction, nor was there any formal proposal,” he added.

Tesla shares fell as much as 5.7 per cent to $288.30 in early trading on Monday, before paring losses to about 2 per cent at lunchtime in New York. That extended a 9 per cent drop on Friday.

The Securities and Exchange Commission, the US regulator, has launched an investigation into Mr Musk’s statements, and a number of lawsuits have been filed on behalf of investors who bought Tesla shares after the Twitter pronouncement by its chief executive and founder.

Tesla’s stock rose as much as 10 per cent in the immediate wake of Mr Musk’s Twitter post, but quickly reversed course as shareholders began to question the source of backing for his claim.

Six days after the original Twitter post, he published a blog post seeking to justify his statement, saying he had held multiple conversations with Saudi Arabia’s sovereign wealth fund about taking Tesla private. Just before the tweet, the Financial Times disclosed that Saudi Arabia’s Public Investment Fund had amassed a stake of 3-5 per cent in the electric carmaker this year.

Mr Musk said the fund had “expressed support” for proceeding with a deal to take the company’s shares off public markets, subject to due diligence and internal deliberations. But critics said it did not appear that Mr Musk had secured a firm commitment to his plan.

The blog post “makes it very clear that financing was not secured”, said Reed Kathrein, an attorney at Hagens Berman Sobol Shapiro who filed a class-action suit on behalf of investors against Tesla and Mr Musk.

“His Twitter fingers are too fast and I think he got himself into trouble,” Mr Kathrein added.

JPMorgan’s Mr Brinkman also pointed to Mr Musk’s blog post as evidence that the funding was not as “secured” as the chief executive had made it out to be.

“The revelation the Saudi fund is subsequently asking Tesla for details of how the company would be taken private suggests to us that any deal is potentially far from even being formally proposed, which is different from our understanding on August 8th, which was based on Mr Musk’s statement on Twitter,” Mr Brinkman said.

Mr Musk’s comments and behaviour over the past two weeks have unleashed a firestorm, with some critics and investors arguing it is time to take some pressure off the chief executive. Tesla’s board is exploring hiring a deputy who could take on some of his operational duties.

Last week Mr Musk gave an emotional interview to the New York Times saying he was overworked as he struggled to overcome bottlenecks and ramp up production of the mass market Model 3 vehicle. That sent Tesla stock sharply lower on Friday.

The shares, which at Friday’s close were down 18 per cent since August 8th, are now negative for the year to date. – Copyright The Financial Times Limited 2018