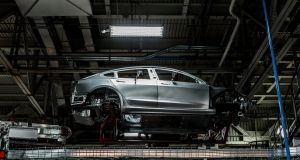 A Tesla Model 3 on the body line at the company’s factory in California. Photograph: Hemm Klok/New York Times

Tesla shares fell after a report said the US Securities and Exchange Commission (SEC) sent a subpoena to the electric-car maker regarding Elon Musk’s plans to take it private and his claim to have had “funding secured” for the deal.

The drop on Wednesday of as much as 4.5 per cent wiped out last week’s advance fuelled by Musk’s tweets and reports that Saudi Arabia’s wealth fund bought a stake in the company.

Fox Business reported that the SEC sent the subpoena, citing sources it didn’t identify, and said it signalled the agency’s investigation had reached the formal stages.

At the centre of the controversy is what Musk meant when he tweeted on August 7th that he had the funding for a buyout, without providing specifics to back up the claim.

Almost a week later, Musk said his confidence was based on conversations with Saudi Arabia’s Public Investment Fund, which first expressed interest in helping take the company private in early 2017.

A week after Elon Musk shocked the markets by proclaiming Tesla may become a private company, evidence has piled up that the mercurial chief executive officer was tweeting too soon.

Goldman Sachs Group hadn’t been formally tapped as a financial adviser by Tesla’s chief executive when Mr Musk revealed he may take the electric-car maker off the market and said he’d secured the funding to do so, according to people with knowledge of the matter.

The bank and private equity firm Silver Lake still hadn’t officially signed on when Mr Musk said on Twitter late Monday that he was working with them, the people said.

This adds to the ways in which Musk has jumped the gun in discussing his proposal to take Tesla private.

The board has twice followed his social media posts by a day with more polished statements, and the company cautioned Tuesday that a special committee of three directors hadn’t concluded whether taking Tesla private would be advisable or feasible.

The billionaire’s tweets also have drawn multiple shareholder lawsuits and scrutiny from the Securities and Exchange Commission.

“He has sophisticated advisers in place now, so hopefully we’ll see this moving forward in a more customary and usual matter,” Teresa Goody, a former SEC attorney and founder of the legal consulting firm The Goody Group, said of Mr Musk Tuesday on Bloomberg Television.

“This is generally not the way that you would go forward, and it’s not a recommended way of trying to reach shareholders.”

When a company announces it’s working with financial advisers, that typically signals a formal agreement. But conversations between Musk and the companies were ongoing as of Tuesday morning, said the people, who asked not to be identified because the information isn’t public.

One person said that while Goldman Sachs and Silver Lake hadn’t officially been hired as advisers, Mr Musk did meet with them in person last week.

Silver Lake isn’t working for Mr Musk in an official capacity as a financial adviser and isn’t being compensated as a consultant, according to a person with knowledge of the matter.

Instead, Tesla’s chief executive is hoping to tap Silver Lake’s experience working on some of the biggest take-private transactions – including Michael Dell’s $21.7 billion buyout of his namesake computer company, and its subsequent $67 billion acquisition of EMC – to help get a deal done, the person said.

Each of those transactions involved the firm making an equity commitment to help fund the deal. While Silver Lake hasn’t committed any financing to Musk’s possible buyout of Tesla, the company hasn’t ruled out potentially making an investment at some point, the person said.

A spokesman for Goldman Sachs declined to comment. Representatives for Silver Lake and Tesla didn’t respond to requests for comment. – Bloomberg