Sporty one-tonne hauler arrives on Irish forecourts next March, continuing the rise of the pickup format outside the farms 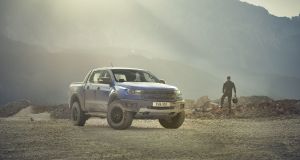 Ford Ireland has confirmed that the Ranger Raptor, the high-performance version of its medium-sized one-tonne capacity pickup truck, will arrive on sale here next March. The Ranger Raptor has just been announced as a European model at the Gamescom trade fair, in Cologne.

“Ranger has, in the past, been mainly a commercial-use vehicle but we are seeing more and more people for whom a vehicle like Ranger suits both their working lives and everyday or leisure time activities” Ford Ireland managing director and chairperson, Ciaran McMahon, told The Irish Times. “Ranger is the segment leader this year and this new Ranger Raptor will be even more attractive to that growing cohort of customers.”

The Ranger will be familiar to many buyers as a single-or-double cab pickup truck, able to carry a one-tonne load weight in its rear bed, and is a common sight on building sites up and down the country. But what’s a Raptor?

Well, for some time in the US market, Ford has sold a Raptor version of is enormously popular F-150 pickup truck, which uses a 450hp twin-turbo V6 engine (closely related to that used by the GT supercar) and beefed-up, high-performance suspension.

The Euro-friendly Ranger Raptor won’t be quite so extreme, performance-wise, but it will copy many of the styling cues from the F-150 Raptor, and will at least be similar in spirit.

It will use a bi-turbo version of Ford’s 2.0-litre TDCI diesel engine, with 213hp and 500Nm of torque. It will use the ten-speed automatic gearbox from the Mustang, and the Raptor will use hugely modified suspension. That will include Fox shock absorbers with a massive 46mm diameter, 17-inch BF Goodrich tyres with huge, balloon sidewalls, and big disc brakes (up to 332mm) with twin-piston calipers.

“The standout experience of the Ranger Raptor, hands down, is how far you can push it off-road and still ride like a millionaire on-road,” said Damien Ross, chief program engineer, Ranger Raptor, Ford Motor Company. “Everything about the Ranger Raptor builds on the already outstanding sophisticated feel and functional capability of the Ranger, and then goes further. From a driving dynamic fun standpoint, it is really an exceptionally special vehicle.”

Ford will fit the Raptor with a Terrain Management System that allows the driver to choose from six different settings; Normal, Sport, Gras/Gravel/Snow, Mud/Sand, Rock, and Baja. The last is a reference to the gruelling Baja 1000 off-road race, and this will set the Raptor up for the ultimate in off-road high-performance duties.

On the styling front, the Raptor will get a special grille, very similar to that of the F-150 Raptor, LED fog lamps, Xenon high-intensity headlamps, flared wheelarches to cover those massive tyres, side steps (which are also designed to prevent mud, stones, and snow from begin thrown up along the sides of the bodywork, damaging the paint), and an interior swathed in blue and black leather. An eight-inch touchscreen, with Ford’s SYNC3 infotainment system, Apple CarPlay, and Android Auto, will also be standard fit.

Ford claims that both the engine and gearbox have been through a harsh durability test regime, including running the twin turbos until they get red-hot (literally) for 200-hours non-stop.

Ford chose to launch the Ranger Raptor at the Gamescom event because, thanks to a collaboration with Microsoft, the car appears in the new Forza Horizon 4 video game, available for the X-Box. The Blue Oval reckons it’s the first to launch a new car at such an event, and it possibly knocks yet another nail into the coffin of the traditional motor show.

“Forget everything you think you know about pick-ups,” said Leo Roeks, Ford Performance director for Europe. “Our new Ranger Raptor is a different breed - a thoroughbred desert racer and extreme lifestyle off-roader that can tow, haul and toil with the best of them in the harshest of working conditions.”