Cliff Taylor: The three Budget 2020 decisions over which sparks will fly

With an election due nobody will be holding back – so what will cause the biggest political rows? 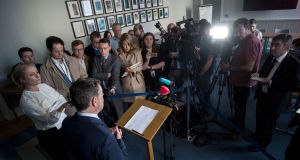 Minister for Finance Paschal Donohoe will have to contend with some key budget battlegrounds.

There are always rows after the budget. Some fizzle out, some drag on, some become major political controversies. And while Budget 2020 may contain less in terms of new measures than some of its immediate predecessors, there are still key battleground areas.

With an election due some time next year, nobody will be holding back. So where will the sparks fly?

Having held off on increasing carbon tax in the last budget, the Government looks likely to go ahead this year, though the increase will be modest.

Carbon is currently taxed at €20 per tonne of CO2 emissions – meaning more polluting fuels are taxed more. A mooted increase of €10 a tonne looks likely to be pulled back to €5 to €7 per tonne for 2020. But all the signs are that this will still be controversial, with Sinn Féin and People Before Profit opposing any increase and the Independent Alliance warning about the impact on rural Ireland.

Measures would also be included to protect those in fuel poverty, including an increase in the fuel allowance paid to 370,000 houses during the winter. Some increases may also be delayed until after the winter.

Nonetheless the imposition on households and how the money raised is used both look set to be controversial. Climate experts say the increase is an essential part of climate strategy, but opponents say it is just an extra burden, will not change behaviour, and is unfair on those forced to drive long distances, including many commuters and people living in rural Ireland.

There is also a debate about how the money is used – the indications are the Government will put some of it towards poorer households and the rest towards supporting environmental policies and investments, including retro-fitting homes.

However an alternative strategy – supported by the Greens – is to give the money back to households via a so-called tax and dividend approach.

While the initial imposition will be limited, it will be very interesting to see how Minister for Finance Paschal Donohoe deals with calls for him to outline successive annual tax increases up to a target of €80 per tonne by 2030. Will he commit Fine Gael to this course?

2. The winners and losers

We are told that there will be no general tax cuts or welfare measures in the budget, with limited relief given instead in both areas. And the Government will use the risk of Brexit as the reason for this – and the need to save money to leave resources available to deal with it.

Fianna Fáil have signed up to this, in broad terms. But having few goodies to distribute at a time when the exchequer coffers are full of cash is nonetheless politically difficult.

This may well lead to complaints from those who were left out that they deserved more than the few who will benefit from the limited budget measures. In terms of welfare and supports to families for childcare, there will be close examination of who got what – and who got nothing.

The same will apply in taxation. For example, if the self-employed tax credit – the so-called earned income credit – is increased while other credits remain unchanged, the PAYE sector may look on enviously. The Government has been gradually pushing up this credit – now at €1,350 – towards the PAYE earner credit of €1,650.

However, as a credit increase is cash straight into people’s pockets, this could raise eyebrows at a time when the Tax Strategy Group papers – drawn up by senior public servants to outline options – pointed out that they should be paying for the recent extension of social insurance benefits to them. Add in expected tax relief for entrepreneurs and the Government could be accused of giving to business and the self-employed and ignoring the rest. Given the pressures on some sectors – for example people renting – any specific reliefs are going to be controversial.

There is a wider point, too. Many taxpayers are getting wage increases – likely to average over 3 per cent next year – and tax credits and bands need to be adjusted if tax is not to take a slightly higher proportion of higher income. And this adjustment won’t happen.

Meanwhile, the general rate of inflation could be 1 to 1.5 per cent next year, and so those relying on welfare, including pensioners, will be a bit worse off in real terms. Getting this through will need a strong selling of the “Brexit risks” story and the vital need to protect jobs.

There will be close attention to exactly what money is set aside for Brexit contingencies; what are new measures, what leeway there is, and where the money will come from. The Government has indicated that the budget will be allowed to drift into the red in the event of a no-deal, and this is the basis on the which the figures are drawn up.

The exchequer finances would move from an expected surplus next year into a deficit of between 0.5 per cent and 1.5 per cent of GDP in the event of a no-deal. Some of this would be due to the impact of a no-deal on tax and spending next year – the rest would be due to specific Brexit contingency measures to help affected businesses, employees and communities, the latter mainly in rural Ireland.

There is general political support for the Government’s stance on Brexit and the backstop. But Fianna Fáil has been critical of the Government’s preparations for a no-deal and may well renew this attack on the basis of what is revealed.

Ibec, the business lobby group, has said it believes a €1.5 billion package is needed over three years to help businesses and that this will require a specific temporary State-aid framework negotiated in Brussels. Supports must be put in place quickly, Ibec says, as others jobs will be lost permanently.

A key message from the Minister will therefore be not only what supports will be put in place, but the speed at which this can happen in the event of a no-deal crash-out.

Given the often lengthy negotiating process for these things in Brussels, this could be a tricky area. And the unpredictability of a no-deal scenario also leaves the Government in an awkward situation trying to lay down its plans.

10 More than €162m for five retail parks in receivership