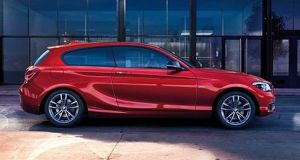 Say a sad farewell, because the current BMW 1 Series is not long for this world, and next year it’s going to be replaced by an all new version, using (dramatic chords)… front-wheel drive. Yes, the most enthusiast-friendly of hatchbacks is ditching its classical rear-wheel drive layout for standard hatchback front-drive. In some ways, this will be a good thing - it’ll open up broad vistas of extra cabin space, and it’ll be based on the same UKL1 platform as the Mini, and there’s nothing wrong with how a Cooper S drives. Even so, we’ll be sad to see the back of the current 1 Series. Its styling has mellowed rather nicely over the years, and if the cabin is well behind that of the current Mercedes-Benz A-Class, then the BMW’s deft, delightful chassis is way out in front. Like, in the next county. Downsides? It’s tight in the back, and it sure ain’t cheap, but jump on board the rear-drive express just before it leaves the station. You won’t regret it.

The A-Class really should be the champ of this sector, but it falls just a hair’s breadth short, because it’s just too ordinary to drive. We’ll come to that in a minute, but first, let’s check out the interior. Whoa, that’s a good cabin. Maybe even great. Maybe even the single best vehicle interior you can currently buy (although you do have to pay extra for the wow-factory 10-inch instrument panel display, which you really, really need to have). That MBUX dashboard has MIT-levels of cleverness, including a ‘Hey, Mercedes’ voice control assistant which is presumably what it’s like to drive around inside Google. It’s tolerably roomy too (enough space for two adults, two kids, and a Greyhound, as we proved some time ago), and the whole thing is beautifully built. Then we come to the disappointments, however faint they are. The 1.33 petrol engine is sweet, but the 1.5 diesel, brought in (as is the 1.33 petrol) from Renault, is a let-down - coarse and uninspiring. The handling really needs to be better, too. On glassy-smooth roads, it’s fine, but on Irish tarmac it bumps and thumps around too much, especially in desirable AMG-Line trim. A shame - a car that could have been unanswerably great is merely good. Decent value, though.

Audi’s A3 is, as with the 1 Series, due for replacement soon, but it’s ageing not quite so well, with its interior in particular starting to feel a little old. Mind you, it feels old in the way ancient Greek temples do - ageing, but apparently hewn from solid marbles. The best A3s are the outlying models. If you want something that looks smart but costs buttons to run, then go for the 30 TFSI model which uses the brilliant little VW Group 1.0-litre turbo three-cylinder petrol engine.

Trust me, you’ll never go back to diesel. At the other end of that scale lies the RS3 with its 400hp turbocharged five-cylinder 2.5-litre engine, which is every bit as nuts as it sounds. It makes noises like an old Quattro rally car and full-bore acceleration feels like you’ve been kicked backwards down a lift shaft. Wonderful, although hardly affordable. In some ways, the A3 is shown up by its new, smaller, A1 brother, but that car is just too over-priced to recommend.

In two words: Getting on.

You have to buy-in to the whole Mini thing to appreciate the car. I mean, really it’s a bit of a silly, slavishly-retro small car that masquerades as a practical family hatch, but which is in fact actually a small coupe with commensurately tiny rear seat and boot space. The interior is either charmingly quirky or a bit daft, depending in what sort of mood you happen find yourself. But that’s the whole point, it’s a bit of a marmite car. If you like it, you’ll love it. If not… well, buy a VW Polo I guess.

The joy of the Mini really is in the way it drives, though, with sharp steering and a pugnacious chassis balance. Yes, they’re all far-too firmly sprung for bad Irish tarmac, but then bouncing from one bump to the next has long been the Mini way of doing things. Engines range from the sweet-and-revvy Cooper three-cylinder 1.5 turbo to the more muscular four-cylinder 2.0-litre Cooper S engine, which will shortly be available in 306hp John Cooper Works form. Need more space? Get the even-quirkier Clubman estate. One question; do you or do you not go for the optional Union Flag rear lights?