First drive: Kick your foot down in any mode and GTE mode engages delivering a surge of combined petrol and electric power 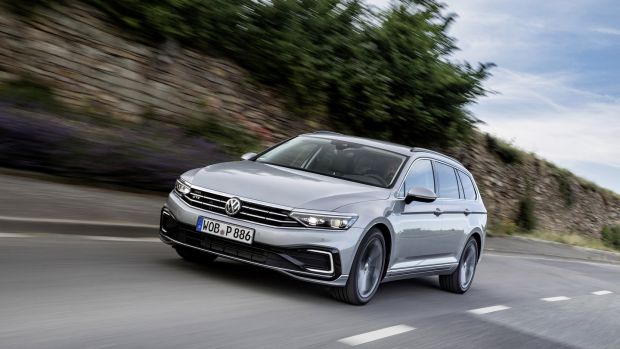 Volkswagen Passat has been given a mid-life facelift that adds new technology plus a few subtle styling changes, ding in this estate version

The eighth generation Volkswagen Passat has been given a mid-life facelift that adds new technology plus a few subtle styling changes. A long-time favourite with European families and younger US buyers, VW has sold over 30 million cars since its launch in 1973. However, the future looks shaky, not because of any flaws with the car, but with changing consumer tastes. Saloon car buyers are flocking to crossovers and SUVs.

Take the Irish market as a microcosm: a decade ago the Toyota Avensis was the best-sellig car in Ireland with Passat in sixth place. Today the Passat is 23rd and Avensis has been axed from the Toyota fleet. At VW,the Tiguan crossover/SUV is now its biggest seller on the Irish market.

So what’s new? The Passat’s exterior styling gets new LED lights front and rear, new bumpers and grille that help sharpen up its handsome design. Individual lettering spell out Passat on its rear in a similar way to the Ford Focus or any Volvo. Some new colours and alloy wheel options also liven up the five seater. New trim materials and fabrics freshen up the interior.

But the biggest changes are inside with the tech. A new multi function steering wheel is standard. The capacitive steering wheel can also detect the driver’s touch. Unlike the previous wheel that needed a wheel movement to confirm the driver was still paying attention the new wheel will be satisfied with a human touch. VW says this clever wheel allows an interface with the car’s drive systems such as travel assist.

The dash layout now comes with the obligatory centre digital display and on higher grades a digital cockpit display for the driver.

The centre console of the dashboard is opened up and designed for smart devices and optional induction wireless charging. There are a couple of USB C connectors. Ambient lighting with increased colour options features in the latest Passat and can provide simple info like cabin temperature.

The other big tech news is about connectivity. The new Passat can not only go online but also be configured to to go online permanently via its standard fit eSim data card. The in car infotainment experience can access to on line services like Apple Music and Tidal streaming alongside internet radio and other apps. Wireless CarPlay smart phone connectivity is available via ‘app-connect wireless’.

The new Passat also puts the brand firmly on the path to autonomous driving. The Passat is the first VW capable of partially assisted driving across a very broad range of speeds from 0-210km/h in the automatic (30-210km/h in the manual). The Passat features a comprehensive combination of driving assist technologies that allow the car actively do more of the mundane driving. Adaptive and predictive cruise control, rear traffic alert, park assist, traffic jam assist, lane assist, front cross traffic assist, emergency assist, trailer assist, travel assist and manoeuvre braking are all available. A new digital logbook is at the heart of VW’s ‘we connect fleet’ system. The money saving system is currently only available in Germany and France but could come to Ireland. It allows monitoring of vehicle condition and usage to assist fleet managers increase efficiency.

The most interesting, perhaps the only interesting model for Irish buyers, in the revised Passat range is the GTE 1.4 litre petrol plug-in hybrid. The driving range in electric only EV mode has been increased by 31 per cent thanks to a larger 13kWh rechargeable battery. Using WLPT measurements, 55km range can be achieved in the estate and 56km in the saloon.

Martin Hube of VW’s communications team gave a real world example of a recent 41km EV only trip with the air-conditioning switched on.

A newly configured hybrid mode will ensure a greater ability to store battery power for later use e.g. in zero emission areas. Volkswagen says its 218hp Passat GTE is one of the first vehicles in its class to meet the limits of the upcoming 2021 Euro 6d emission standard.

So we have a family saloon with a plug that would normally seem to make sense for company fleet managers. Alas, as with other hybrids out there the GTE is it uses petrol. Under the current Irish tax regime this has no benefit for businesses, as unlike diesel, company drivers can’t reclaim VAT on petrol use.

High mileage use still requires diesel, the very fuel that Volkswagen inadvertently helped demonise. A newly developed 2 litre TDI Evo diesel with 150hp makes its debut in the revised Passat. The four cylinder produces lower CO2 than its predecessor thanks to a combination of a dual catalytic converter SCR system and dual AdBlue dosing. Ireland will take a limited number of engines from a range of relatively green four cylinder units. Three TDI diesels are available, namely a 1.6 litre 120hp, 2 litre 190hp and a 240hp range topper with Ireland taking the latest 2 litre 150hp engine for now.

The GTE has a combined output of 218hp. The electric motor creates 115hp and the engine 156hp. The system eats away some of that power to deliver the total. The six speed automatic has paddle shifters and a B mode for added brake regeneration - ideal when tackling hill descents. You can choose from three drive modes: E-drive, hybrid (that combines the two previous modes of battery hold and battery charge) and GTE mode for full system power. The Passat GTE always starts up in electric only e-drive mode and will drive on electricity alone up to a speed of 140km/h with a reasonably gentle right foot.

Hybrid mode works out the power delivery and charging of the battery according to a number of criteria. If you use the active cruise control and navigation they will work together to slow the car for bends and junctions - providing they are mapped.

Kick your foot down in any mode and GTE mode engages delivering a surge of combined petrol and electric power. You can also set the amount of charge your battery has or maintains on a journey for use when you need it.

Volkswagens says 80 per cent of buyers in Europe are company users. This percentage is considerably less in Ireland where fleet plays a strong but not dominate role. VW Ireland says the Passat is still a car bought by user choosers and private buyers. The new Passat arrives in October but pricing is dependent on any budget changes to VRT. There are bargains to be had with the outgoing model due to the sectors fall off in demand.

Verdict: Plenty of power with green credentials to boot.