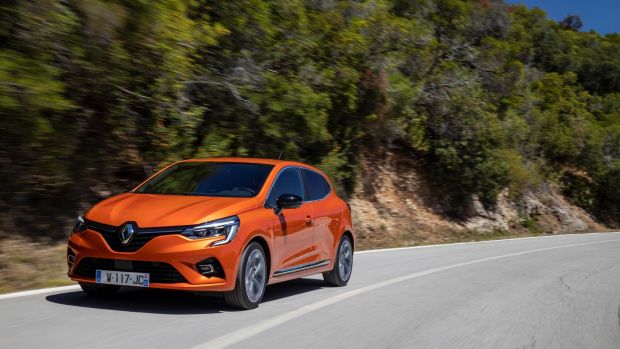 No, it’s not electric (and probably never will be). No, there’s no exciting high performance version (again, at least not yet). No it’s not a hybrid (although it will be). In fact, it was both easy and tempting before the fact to dismiss the new Renault Clio as “just another small hatchback”. The kind of car that you might own and instantly forget about, or that a friend might buy and you’d not notice. I mean, it even looks, to all intents and purposes, identical to the old Clio . . .

To dismiss would be a mistake though, and a pretty big one. Would you be surprised to know that Renault Ireland shifted 1,600 Clios last year? That’s better than 1 per cent of the entire car market, all by itself, and that in its run-out year. In fact, the Clio is one of those rare cars that, ever since the fourth generation model was launched in 2012, has actually increased its sales year-on-year. It’s the second best-selling car in Europe right now ( behind only the VW Golf) and, with 15 million sold since the first generation in 1990, a new Clio is sold, on average, every minute.

So, it’s important. Forget, if you can, that there won’t be an all-electric version. While some rivals are trying to build electric and combustion engined versions together in one model, Renault is going to keep the new Clio and the new Zoe EV separate, as it feels there are too many compromises involved in trying to mix and match. There will be a hybrid version next year, though, with a new 1.6-litre naturally-aspirated engine, two electric motors (one big, for driving the car, one small for running ancillary systems), and a 1.2kWh battery which Renault says should keep you on electric power for as much as 80 per cent of the time when driving around town.

That’s for later, though. For now, the new Clio, the fifth generation of the model, is all about being conventional. It’ll arrive in Ireland in the autumn, with a choice of two 1.0-litre, three-cylinder engines. One, a naturally-aspirated version, will have 75hp. The other, a turbocharged model, will have 100hp; a 10hp improvement over the old model. Renault claims that consumption and emissions have improved by 10-15 per cent, even though power has increased. There will be a 130hp 1.3-litre turbo petrol too, and an 85hp 1.5-litre dCi diesel, but both will be of minority interest in Ireland.

Will the new RS-Line version also be of minority interest? Probably, because adding the faux-sportiness (some carbon-fibre style trim in the cabin, a styling element in the front bumper meant to ape the look of an F1 car’s front wing) also adds cost, and this is a hugely price sensitive market. Indeed, even with prices going up across the board (thanks to more standard equipment and the strictures of meeting EU emissions regs), Renault Ireland says that it will have to work hard to keep its core, big-selling models at below €19,000 – a psychological price point above which buyers in this segment tend not to venture. A basic new Clio will probably start at about €17,000, give or take.

What about equipment? Well, there are digital instruments for a start. These, on base models, look disappointingly similar to the too-cheap-looking digital dials used in the Megane, but later in the year Renault will start offering a much more whizz-bang looking 10-inch instrument panel, which could well be worth the extra outlay as it adds mightily to the look of the cabin. Also adding to the ambience is the new central touch-screen. Basic models come with a relatively modest seven-inch version, but ritzy versions get a big 9.3-inch screen, sitting upright like an iPad, which looks great and is better (if only slightly so) to use than Renault’s older R-Link infotainment system.

That system includes native Google connectivity, smartphone connections, and the beginnings of Renault’s autonomous driving systems. The new Clio will, with certain options, be able to take on more of the driving duties itself in traffic (and do a better job of keeping to the middle of its lane than some premium-brand competitors). Even basic cars will now come with LED headlights, lane-keeping assistant, emergency autonomous braking and traffic sign recognition.

That interior, more importantly, has also seen a major improvement in quality and design. The last-gen Clio’s cabin felt a distinct step behind what was on offer from, Ford, VW, and Toyota. The new version might actually be a step ahead of all three – it’s that good.

It’s not the most spacious, though. Renault says it has found more rear seat space (and the boot is an impressive 391-litres) but the rear compartment feels a touch cramped and the centre rear seat is all-but unusable.

There is also a sense of increasing maturity to the Clio’s driving experience. That’s a good thing in many ways – it’s decently refined, comfort levels are good, and the improved cabin quality makes it feel like a bigger, more expensive car. Sadly, the steering and handling feel a touch too removed from the action, leaving the Clio – once a by-word for frisky fun and driving enjoyment – feeling a touch too remote.

We’d avoid the 1.3-litre 130hp engine, too. Combined with the seven-speed dual-clutch DCT gearbox, neither component feels entirely happy nor settled. The gearbox is slow and occasionally awkward, the engine sometimes too noisy, with an unpleasantly harsh edge to its sound. We’d also stay away from the sporty RS-Line trim, as the 17-inch wheels cripple the ride quality.

Oddly, the 17-inch wheels on the high-spec Intens model don’t do that, or at least they don’t do it to the same annoying extent. This less sporty model rides with vastly superior comfort to the RS-Line model, and we tested it with the updated 1.0-litre 100hp three-cylinder TCe turbo petrol engine. Although (obviously) much less powerful than the 1.3, it’s actually a much nicer engine overall. It’s smoother and more refined, and while you’re not going to be travelling very quickly (the Clio TCe 100 is around a second slower to 100km/h than the 95hp TSI VW Polo) it’s a more satisfying drive overall. That’s thanks in large part to the five-speed manual gearbox, which is far more pleasant to use than that awkward DCT automatic. This is definitely the new Clio du jour.

Renault has trod a careful, but largely successful path here. The style was good enough, it reckoned, so no need to change that. The cabin changes have made the Clio feel much more grown up, much more expensive, and much more refined, all of which is good. Some of the fun factor of old has been dialled out at the same time, but we doubt many customers will mind much. If that new quality extends through to long-term reliability, then Renault’s likely onto a winner here.