Could the Volkswagen T-Cross be about to buck the compact SUV trend by being both well designed and well engineered? We take it out on the road to find out. Video: Neil Briscoe 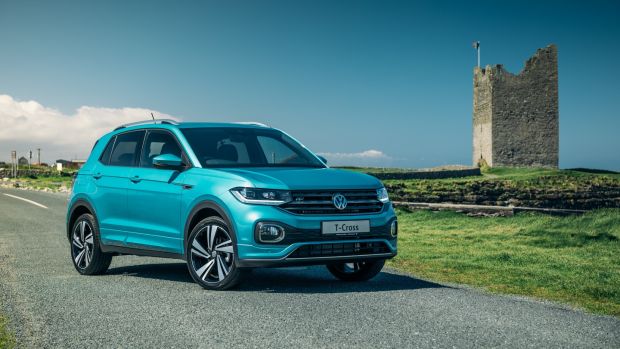 Volkswagen T-Cross is a fun little crossover, overshadowed by its own hype and the more affordable Polo hatchback

Clearly someone at Volkswagen has a monumental crush on Cara Delevingne. Certainly more so than the company’s latest crossover.

Fancy finding out more about the T-Cross? Well if you pop along to the VW website you’ll have to wade through a lot of Cara to get even a fleeting sight of the car.

On the all-important landing page for the T-Cross, there’s a gallery of 21 images. There is Cara playing drums, Cara looking moody, Cara in flight jacket. Further on through the photo deck there’s a portrait of some random couple complete with mood lighting. No clue who they are. A couple of grey-haired hipsters show up later on. The photographer’s family perhaps?

All very hip and cool, but where’s the car? Where is the T-Cross? Has VW been hacked by Delevingne’s hipster fanbase? Even when the T-Cross makes a cameo appearance in the background, it’s hardly convincing. There’s one image of one of our grey-bearded hipster looking positively perplexed as he stares at what we assume to be the car’s digital controls. Hardly a ringing endorsement for the car.

It says something about the message overtaking the motor that this nonsense gets to play out on the online marketing for one of the world’s biggest car producers and what is meant to be one of its mass market models.

Many of Cara’s moody photos are accompanied by inspiring quotes. “Fashion is about being brave. There are no rules,” she tells the potential T-Cross buyer. Other gems include “rhythm is life” and “it’s good to sweat”.

Okay, good to know. She also tells us: “Where there is chaos and stress, I’m calmest.” That should earn her a seat on the VW Group board.

Clearly we’re now as guilty as the over-excitable VW marketing department of fixating on Cara rather than the T-Cross, so back to the car at hand. What we ultimately have here is a high-set version of the impressive Polo.

In the midst of a major product onslaught – mainly focused on the all-important ID range of electric vehicles arriving from next summer – slicing and dicing your established engineering makes complete sense. And the Polo is a winning recipe.

Even in an increasingly crowded crossover car park, the Polo roots of this car carry strong kudos.

Without spending a full week with the car, it’s safe to say we got the T-Cross message pretty quickly. Paint it turquoise and stick a spandex-clad twentysomething model stretching, it’s still a Polo at heart. Which is probably why the company called in Cara and her inspiring quotes. The T-Cross storyline is pretty run of the mill.

In fairness, though, it’s a good-looking car, though it takes the larger T-Roc to properly showcase VW’s SUV styling language. Inside and the colour contrasts continue, but again it’s one of the best built interiors on the market. From the glass touchscreen display through to the manual controls, it’s up to the company’s benchmark standards. It’s a trait that stretches across the VW Group brands and something for which they don’t always get enough credit.

We’ve praised this engine before, but it’s worth repeating once more: it’s a little gem. Eager, responsive and yet not noisy, the petrol option is a no-brainer for the T-Cross. There is a diesel 1.6-litre, but it’s hard to see why you would bother. It offers only marginally more torque, is significantly slower, at least 100kg heavier and, under new WLTP emissions rules, has a higher CO2 rating.

The 1-litre petrol comes in two flavours: 95bhp or 115bhp, the latter with a choice of six-speed manual or 7-speed auto DSG. In second-tier trim the auto transmission adds €1,900 to the price, so if you’re urban-only driving it might make sense but the six-speed is smooth and lets you get the most out of the little engine.

And you are likely to be urban or suburban, for this is a front-wheel drive crossover. If you want some mud-plugging off-road fun, its best to look elsewhere (Suzuki’s impressive Vitara being a great starting point).

Boot capacity is 385 litres, opening out to 1,281 with the rear seats folded flat. And there is decent small car legroom in the back, helped by the higher set seating position.

The T-Cross is entering a crowded field, populated by some of its cousins. For the cost-conscious, the Seat Arona probably makes more sense, while the Citroen C3 Aircross is the quirky alternative and definitely the comfort choice. Meanwhile the Hyundai Kona mixes both of those traits quite well.

There is a flaw in all the fine marketing for the T-Cross: many of the Irish Delevingne fans don’t have the spare cash to lay out €25,000 or more on a new car. And if they do, they’re probably going to want something greener than a petrol or diesel crossover, even if it does come with Cara’s cachet.

Most of the spanking new small crossovers we see on the roads are driven by older empty nesters. They may be hipsters in their own right, but they’ll need more to convince them to part with several thousand euros than some sassy snaps of the car behind Cara. And they might even spot the fact they could simply opt for the equally funky and spacious Polo hatchback for under €20,000.