The Merc is still the boss, but there’s now a Tesla giving chase 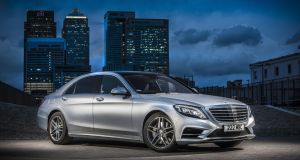 it couldn’t really be any other, could it? I mean - heaven knows - the others do try, they do try so very hard, but in the end the big Benz always manages to keep its Stuttgart snout in front, even if the margin sometimes narrows a little. The current incarnation of the S-Class is coming to the end of its life now, but it remains a staggering achievement in motoring. So refined, so comfortable, yet so swift, and so surprisingly assured and even (yes, really) a little entertaining when the corner frequency increases. It’s true that the cabin might be a touch ‘bling’ for some tastes (but if it is why, oh why, are you shopping in this class?) but the quality levels are simply astonishing. Latest updates include a full-width digital dash, automated driving systems that are becoming ever-more clever, and the option of plugin-hybrid models that have Co2 emissions as low as 80g/km. Or you could buy the S65 AMG model with what might be the last V12 engine that Mercedes ever makes…

In two words: The General.

We have to talk about the nose. I mean, it’s a bit much, isn’t it? A conk that big surely only a mother could love? Well, apparently not and the answer to why BMW has given its big 7 such drastic rhinoplasty is simply that the Chinese market favours that kind of styling, and the car makers always follow the money. If you don’t like it, well that’s just tough. On the upside, the rest of the 7 Series is as impressive as it’s always been - superbly comfortable and refined, but still properly BMW entertaining when you get behind the wheel yourself. Six-cylinder diesel models still have remarkable all-round performance, but the 745e plugin-hybrid is catching up fast, and is more multi-role than it used to be. Or, and this is just a suggestion, there’s the magnificent 585hp 6.6-litre V12-engined M760Li, for when you absolutely, positively, have to get to your Gulfstream VI on time.

As with the BMW 7 Series, the big Lexus is rather defined by, maybe even overshadowed by, its nose. While the Beemer sports an enormous set of nostrils, the Lexus appears to have fangs in a vast shark’s mouth, reaching forward to take a bite out of the boot of the car in front. It’s a bit outré in the styling department, you would think, for most, conservative, luxury car buyers but it’s certainly striking, certainly different, certainly appealing. Not half so appealing as the interior, though, which combines the sort of fixtures and fittings you’d associate with the luxury hotel, with the sort of quality of assembly that would make a Swiss horologist cry into his tweezer collection. Calling the cabin sumptuous is frankly a bit of an insult - it’s way better than that. The hybrid drive is excellent too, combining a super-smooth V6 with electric assistance for big muscle with low bills. Nice. A shame that the infotainment system can’t keep pace with the rest of the package, and a shame too that the ride quality veers too close too firm and sporty, and too far from soft and comforting.

It’s true to say that Tesla, cast in the role of industry disruptor, has probably done more to move car makers towards a fully electric future than anything other than government and EU emissions legislation. It’s also true that the company is financially flaky, and has a chief executive who’s rather more (in)famous for this Twitter feed and his plans for the exploration of space, than for making cars. True too that while Tesla is unstoppably brilliant at creating batteries and electric motors, it’s still getting up to speed on the basics of making a car - the Model S’ quality levels are way to inconsistent for a car priced against the Mercedes S-Class. Still, it’s impossible to ignore the appeal of virtually zero-cost fuel, of that enormous touchscreen, and of the sheer propulsive qualities of those muscular electric motors. Sort the quality levels (and stop making promises you can’t keep when it comes to automated driving systems), and the Model S just might be unstoppable.