Munich applies its magic touches to take top prize, but Peugeot put in a surprise appearance 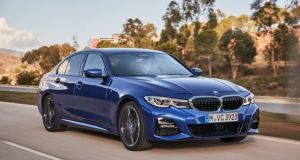 How gratifying it was to hear, when talking to BMW’s senior engineers, that in an age obsessed with crossovers and high SUVs, that the car they enjoyed working on the most was the new 3 Series.

“The masses are all in the right place” said one. Amen to that, brother. Okay, so you do have to get past the styling, which is arguably the most awkward bit of BMW design since the old days of the Bangle Era, but once you do so, the rewards are great. The interior is just about perfect - high in quality, wrapped around the driver, just about spacious enough for day-to-day needs. The new all-digital dials are not as impressive as what Merc can provide, but nice enough. The engines are mostly carried-over, but they’re all at least basically good. The best bit, though, is the way the 3 drives, which is just as it should be.

Right now only Porsche has an electric power steering system that can match the feel and feedback you get from the new 3 Series. It is sublime, and makes the car hugely rewarding to drive. Been put off diesel and don’t want a default 320d? No probs - the 320i and 330i petrols are frugal enough for most, and the new plugin hybrids are waiting in the wings.

Mercedes gave the C-Class a big update last year to keep it competitive with the incoming 3 Series, and its efforts weren’t in vain. Although the C lacks the incisiveness of the BMW’s chassis tuning, it’s also more comfortable overall, and arguably has a cabin that noses ahead of the 3’s. Well, it would if the all-digital instrument pack came as standard, but it doesn’t - swings and roundabouts, eh? The good stuff is all really good, though. The upgraded 2.0-litre diesel engine is little short of excellent (although the 1.5 petrol turbo mild hybrid is too thirsty for its own good) and the AMG models - V6 C43 AMG and mighty V8 C63 AMG - operate at the very peakiest peak of the high-performance saloon world. Coupe version is gorgeous, but we’d go instead for the handsome, commodious estate model which combines all that’s good about the C-Class with just a touch more practicality. Conspicuously well-priced, too.

Seeing as we’re waiting for Audi to launch its updated A4, the Giulia sneaks into third place in this category, mostly on the basis of how much fun it is to drive. Which is a lot. Like, a lot a lot. In fact, it’s only now that the 3 Series is getting around to providing steering that feels sharper and better than the Alfa’s, and actually in some circumstances, we’d still prefer the way the Giulia darts into a corner with minimal effort and maximum fun. Kudos too to Alfa for providing such tactile points of contact with the driver - the steering wheel feels great in your hands, as do the optional all-aluminium paddle shifters for the standard-fit eight-speed auto gearbox. It’s also, as you’d expect of Alfa, very pretty and has reasonable cabin and boot space. Quality? Well, that’s always the $64,000 question with Alfa. We hear good things and bad things, but overall in our experience it doesn’t seem any less well made than its German competition, although some of the cabin fittings are way too cheap for a car of this type. All of which goes out the window with the €100,000, 510hp V6 turbo Quadrifoglio - a car that can show BMW M and AMG a thing or two about how to make a four-door performance saloon that can dance like a Strictly superstar.

Way back in the day, Peugeot made cars that could compete with the likes of BMW and Audi head-on. The old 505, for example, was a big, comfy, executive express with smooth, assured handling and gorgeous lines that, frankly, showed the German rivals of its day up just a touch. Well, those days have (kinda) returned with the new 508. Low, lean, and really very sexy, the 508 looks far more like a sports saloon competitor, even if it’s priced closer to a Passat or a Mondeo. The interior is a masterstroke - taking the small-wheel-high-dials look of the tall 3008 and 5008 and lowering it down to a laid-back saloon shape works really well, and the quality is more or less spot-on too. Diesel 130hp 1.5-litre engine is all you’d ever really need, but there’s big fun to be had with the petrol turbo 1.6 and there is a plugin hybrid model, and a very handsome estate, on the way. All that lets the 508 down is that the chassis can’t quite match the styling for drama, but when a car looks this good, we’re prepared to let such things slide a little.