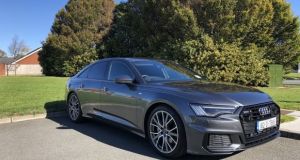 Best in class: Audi A6

The new A6 kind of quietly snuck in and nicked this category out from under the noses of the Mercedes-Benz E-Class and the BMW 5 Series. And I say quietly because I really, really, mean it - the A6, even in its lowliest 2.0-litre TDI diesel form is exceptionally quiet and refined, which most of the time is exactly what you want from a big, comfy, executive express. Of course, when the road becomes a bit more challenging, then you also want some driver entertainment, and while the Audi still isn’t as sharp to drive as the BMW nor the Mercedes, it’s better than it used to be - the steering is slicker and faster, the overall balance better. Inside, you’ve got a gorgeous, beautifully-made interior that’s far more spacious than that of a BMW 5 Series, and which easily matches the quality of the Merc. ‘40’ 204hp mild-hybrid TDI diesel is kind of the default choice for now, but plugin hybrid models are coming very soon.

The E-Class has ruled the roost of this segment for the past couple of years, and even with the talented interloper from Ingolstadt now in the mix, it’s not at all hard to see why. It’s quietly handsome, has a fantastic interior (which is also put together with rare precision), is very good to drive (even better if you’re talking about the rocketship AMG models) and, especially in estate form, about as practical and useful as a car can be. You can, of course, also have it in coupe or cabriolet form, should you (a) wish or (b) the weather be sufficiently clement, and for rainier days, there’s always the E-Class All-Terrain, which gets a raised-up ride height and four-wheel drive, and which is a far more elegant solution than an SUV in most cases. Basic 200d engine is a little short on outright grunt, so go for a 22d at minimum. If you’re a town-dweller, then it could well be worth nabbing a plugin-hybrid model so as to be able to waft around for short hops on battery power.

It’s funny, but the 5 Series suddenly feels rather like the runt of this particular litter, and I don’t mean in terms of its dynamic performance. No, it just has, rather suddenly. started to feel rather too tight and compact on the inside, especially compared to the stretch-out space you get in the Audi A6 these days. OK, so as a drivers’ car (and the 5 Series is never anything but) there’s a pleasant sense of the car being tightly wrapped around you, but it’s definitely at the expense of passenger comfort. The centre of the 5 Series’ gravity is also changing now, as buyers start to - slowly but surely - move away from the default 520d diesel and start investigating other options. Sadly, for most, that won’t include the amazing 600hp M5, but the plugin-hybrid 530e is a pretty good option, capable of swishing around town on electric power, and able to do a steady 6.0-litres per 100km on the motorway. A gentle step into the future, then, but one that could doo with a touch more elbow room.

In two words: Dynamically ahead.

It seems almost perverse to describe two of the most sensible and (literally) safe cars in the world as wild cards, but Volvo is still hovering just outside the mainstream of the luxury car market, and many buyers don’t place the brand on the same pedestal as the Big Three Germans. More fool them, because both the S90 saloon and V90 estate are among the best of their breed. Not able to out-handle a 5 Series, nor quite with the stentorian qualities of an E-Class, but with a laid-back Scandinavian charm all of their own. The cabins are utterly lovely - some of the best seats you’ll ever sit on, plenty of space, and that excellent, upright, massive touchscreen. The V90 estate is the one to go for, if only because its styling is slightly better resolved than that of the S90 saloon’s, plus of course there’s the benefit of greater practicality out the back. Plugin-hybrid T8 has surprising performance, thanks to 400hp of combined power. Regular D4 and D5 diesel engines are also good (although they don’t seem quite as refined as once they did) and it’s good to see the option of new T4 and T5 petrol versions too. Cross Country estate gets extra ride height and all-wheel drive for tackling tough terrain, but we’d go for a standard V90 to keep the looks as slinky as possible.