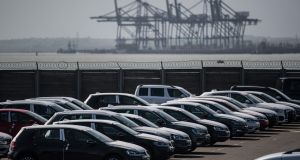 New car sales fell 17.8 per cent in January compared to the same month last year as the motor trade faced lockdown restrictions that limited sales operations to “click-and-deliver” services. However, there was a rise in used car imports despite the impact of Brexit.

New registrations in January totalled 25,191 compared to 30,650 for the same month last year.

In what is traditionally the busiest month for new car sales, the market was only down just 7.8 per cent up to January 30th but suffered a major drop on the last day. Last year registrations for January 31st totalled 3,333, while this year there were only eight cars registered on the day, strongly impacting on the end-of-month total.

Used car imports rose 3 per cent in January compared to last year despite the impact of more complex regulations due to Brexit and the application of stricter emissions rules, particularly on older diesel imports.

Volkswagen, BMW and Audi were the most popular imported brands, but the Ford Focus was the most imported used car, ahead of the VW Golf and BMW 5 Series.

The majority of imports are over four years old, while 55 per cent are diesel. Just 69 of the 6,824 imports were all-electric vehicles.

The most popular model this year is the new Hyundai Tucscon, ahead of the Toyota’s Corolla and Rav4. Toyota has four cars in the top 10 most popular models, while Hyundai and Volkswagen have two, and Skoda and Ford with one each.

At the premium end of the market Mercedes-Benz overtook Audi to become the best-seller, with 710 new sales, compared to 699, with BMW in third place with 686.

The Mercedes-Benz E-Class is the best-selling premium car with 237 registrations, ahead of the BMW 3 Series with 164.

Tom Cullen of Simi said: “Strong pre-orders coming into the new year and the ability of the industry to provide both online shopping and a click-and-deliver service has mitigated somewhat against the full impact of the pandemic in January.”

Hybrids now make up over 25 per cent of all new car sales, while fully-electric models represent 3.9 per cent. January saw 981 new all-electric cars registered, compared to 891 for the same month last year.

Even in rural areas the shift towards hybrids is apparent. In Kerry, for example, hybrids – both regular and plug-in PHEVs – now account for 24 per cent of new sales, compared to just 1.5 per cent in 2016, while the percentage of diesel sales has dropped to 43 per cent from 73 per cent in the same period.

Mr Cullen said: “Despite the fall in new cars sales both electric vehicles and PHEVS are ahead of last January, and with more models and supply coming on stream as the year progresses, it is anticipated that this growth will continue.”

New car sales to private customers are down 19.75 per cent compared to last January to 18,075, while registrations by dealers and distributors – often known as pre-reg cars or demonstrators – came to 4,482.

The biggest falls in sales were to leasing and contract hire companies, down 45 per cent to 1,096, and to corporate customers, down 22 per cent to 648.

In the commercial vehicle market January saw 5,033 new vans registered, a drop of 10.9 per cent on last year, while truck sales fell 4.5 per cent to 340 new vehicles.