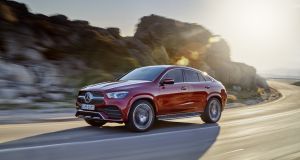 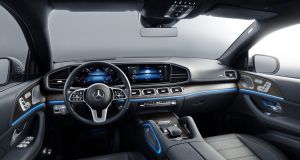 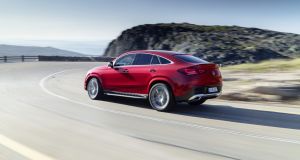 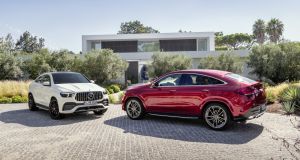 There are niches, there are sub-niches and then there’s the market for expensive premium coupé crossovers. Given that these cars offer less practicality than a regular crossover and less dynamic ability than an equivalent coupé, you should be able to count the potential buyers on the fingers of one hand. Yet somehow, somewhere there is a group of motorists looking for the worst of both worlds.

To prove the point, and against a wave of criticism of these cars, Mercedes-Benz is now on the second generation of its GLE Coupé. Not that Mercedes are the only sinner in this segment: the original sin was committed by BMW with the birth of the X6.

The GLE Coupe’s exterior styling remains motoring Marmite: you either love it or loathe it. The recipe is simple. Take the excellent, practical and handsome GLE crossover and drop a rubble-loaded skip onto the rear part of the roof. Smooth out the lines and hey presto, you’ve got the latest crossover coupé.

This update involves slimmer LED headlights, stretched taillights that improve its rear plus the availability of a huge sunroof. The car has a large front end, high flanks and an odd sloping rear end that is the only coupe-like part of the car. It retains an imposing front grille that will frighten small children and scare other motorists out of the way, if those are the sort of responses that gives you pleasure in life.

On the positive front, the cabin gets a thorough and welcome overhaul. The latest version of Mercedes-Benz user interface (MBUX) that first appeared in the current E Class features prominently. Connectivity is cutting edge and all manner of apps are available as with the GLE. The Coupe’s enlarged interior is really well put together and the materials used are premium.

The star attraction and rival bashing sleek one-piece digital display from the GLE with its two 12.3-inch digital displays side by side. The cabin is an airy and nice place to spend time. The dash is set quite high; this is especially noticeable if you sit relatively low in the driver’s seat. To get any sight of the bonnet you will need to raise the seat a good bit. Boot capacity grows by 70 litres to an impressive 655 litres, expandable to 1,790 litres.

All models get sharper more direct steering plus the 4Matic four wheel drive on demand system can send anything from 0-100 per cent of torque to any given wheel as required. Firmer steel suspension is standard but the optional Airmatic air suspension is worth considering as it can facilitate further suspension options. We tested three quite different versions of the GLE Coupé: a sporty one, an supposedly “eco” one and one that was just right thanks to optional trick suspension called E-Active Body Control.

The sporty one is the petrol powered Mercedes-AMG GLE 53 4Matic+ Coupé. The indulgently rapid machine stops short of the high performance AMG 63 Coupe. The 3 litre straight six twin-turbo electrified mild-hybrid 53 develops 435hp and 520nm of torque. 0-100km/h takes just 5.3 seconds with top speed limited to 250km/h. The car is a good bit of fun to hustle along and feels quite mechanical and connected.

Of course, the AMG Ride Control+ air suspension is tuned for sporty driving. Two axle mounted servomotors stiffen or loosen the car’s anti roll bars to aid flatter and more dynamic cornering and you can feel them working away. A switchable active exhaust adds to the beefy driving experience. I spent a childish amount of time shifting up and down the nine speed AMG Speedshift TCT auto gearbox.

The issue here is that it’s just not brash enough. AMG SUVs are meant to be anti social symbols of excess, but somehow despite its best efforts this AMG 53 version isn’t loud enough to grant it a place on a fleet car list for the Russian mafia. That’s going to hurt sales. CO2 emissions are 212g/km with average fuel consumption a claimed 9.3 l/100km (30mpg) under NEDC rules, both of which are surprising frugal given the lump of metal we’re dealing with here.

The eco friendly model is the Mercedes-Benz GLE 350 de 4Matic Coupe. The de stands for diesel plug in hybrid, capable of delivering over 100km of electric only driving range and a CO2 emissions figure of just 34g/km.

Diesel hybrids are not that popular with the public or car producers these days, but when you consider the high mileage/speed commutes between German cities this car makes a lot of sense. For Ireland’s market there is good news as a petrol hybrid is in development albeit delivery is some time away.

The fourth generation Mercedes-Benz PHEV is a vast improvement on the version it replaces. Despite having 7 driving modes (2 EV) it delivers the least dynamic driving experience of the Coupe’s range.

The car feels large and soft from the driver’s seat. The driving experience is dull yet acceptable for day to day use. Power comes from a combination of a four cylinder 2 litre diesel engine (194hp/400nm) and a very compact 134hp electric motor powered by a rechargeable battery pack with a 31.2kWh capacity. The total hybrid system power output is 320hp and a whopping 700Nm. A good chunk of that torque is used up hauling the extra weight of the under floor battery pack. 0-100km/h takes just 6.9 seconds, top speed is 210km/h and average fuel consumption is a claimed 1.3 L/100km (217mpg).

Recharging is via a standard type 2 EV cable (home EV box or public charger) or you can use the car’s engine to recharge the battery on the move. Driver’s can select via a touch of a button how or when the EV power is used. The car can - and most likely will - be left to sort all the technical stuff out itself. A 60kWh public charger can deliver an 80 per cent charge in just 20 minutes or fill it in 30 minutes.

The version that impressed overall was the 400d 4Matic Coupe powered by a 2925cc straight six diesel. The 3 litre pushes out 330hp and 700nm, delivering a 0-100km/h time of 5.7 seconds and a top speed of 240km/h. Our test can had 400d the optional E-Active Body Control air suspension that literally can lean in to bends.

Large cars tend to roll laterally when cornering with enthusiasm but not so the 400d’s. The 48-volt damper control system anticipated bends and scanned the road ahead. In Curve mode its four corner mounted servo motors/pumps stiffened or softened each shock absorber as required to counteract the laws physics. This set up delivered an enjoyably engaging experience behind the wheel.

The GLE Coupé arrives in early 2020 and will be a rare sight Ireland’s speed restricted road network. At best it is an alternative to ‘another’ GLE, even if that’s a mistake. If you fancy a GLE Coupé then there is probably no talking to you. But if you care to listen, you’d be far better going for the far better package of the regular GLE. That’s our tuppence-worth.