Futurus and BMW link up to provide real-time hazard detection 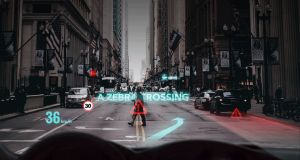 Mixed Reality means that you still view the world through the windscreen, but the glass can also be used as a gigantic projection screen, with information on road hazards, traffic and local information flashing up in front of the driver’s eye.

BMW has teamed up with Chinese digital display experts Futurus to create the next-generation of heads-up displays. These will no longer be simply about projecting your speed and maybe some sat-nav arrows on to the windscreen, but will instead incorporate complete windscreens with augmented reality displays.

Futurus is showing off its new Mixed Reality (MR) windscreen at the hugely influential Consumer Electronics Show in Las Vegas, and BMW is one of the carmakers lining up for a slice of its tech. MR means that you still view the real world through the windscreen as normal, but the glass can also be used as a gigantic projection screen, with information on road hazards, traffic, and even local information flashing up in front of the driver’s eye.

The MR windscreen features independent projection layers, so that from the driver’s perspective, the screen is clear aside from hazard warnings (Futurus’s systems can detect cyclists and pedestrians at 50m distance) and navigation directions, which can point you directly down the street you need.

From a passenger’s perspective, the windscreen can be a big TV, showing movies, music, or social media without distracting the driver. The tech is similar to that deployed by Jaguar Land Rover on its infotainment screens, which effectively divides the screen up like a venetian blind, showing one set of angled pixels in one direction.

Chief scientist at Futurus Uber Wu says: “Vehicle manufacturers must adopt MR technology if they want to offer a truly safe yet immersive experience in the next generation of vehicles. The in-cabin experience has not changed radically in decades, our windscreen transforms the driver and passenger journey. The technology is the first step towards a smart windscreen that delivers personalised, interactive in-car entertainment, e-commerce and enhanced safety features, thanks to split-screen technology that doesn’t distract the driver.”

Chief executive of Futurus Technology Alex Xu adds: “In-car augmented reality head-up displays (Hud) are installed in relatively few models and offer limited performance, but in the next few years we will produce a smarter hybrid-reality windscreen display that provides the safest ride to mass-market vehicles.”

While Futurus’s stand at the Consumer Electronics Show (CES) will consist mostly of a huge MR windscreen demonstration, across the hall BMW has its own work to show off – a two-seat version of the i3 electric car. No, it’s not what you’re thinking. It’s not a Smart fortwo rival. Instead, the i3 “Urban Suite” puts the driver up front as normal, but bins the front passenger seat and one of the rear seats to create a super-luxury perch from which you can be silently chauffeured around.

The idea is that the single rear-seat passenger has their own foot rest, a bigger, comfier seat than usual, personal drop-down video screen and a focused “sound zone” so their tunes can be listened to without upsetting the driver.

They also get what appears to be a small side cabinet, which BMW says is made from certified wood, while the rest of the cabin gets recycled carpet and leather tanned to eco-friendly principles. It’s not a one off either – BMW has actually made a whole fleet of these i3 Urban Suites and is offering them, via a special app, to whizz CES attendees around Las Vegas. The idea? “To demonstrate that luxury travel in the future will have nothing to do with vehicle size,” according to a BMW spokesperson.