List of the week: 10 great Irish paintings on public display 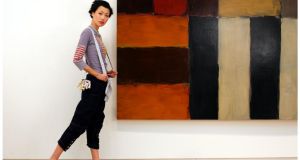 We often find ourselves looking at art on a screen, but to see a painting in reality is a different experience. And, amazingly, it’s free. Our national collections are stocked with riches.

1 Megaceros Hibernicus By Barrie Cooke, 1983 Irish Museum of Modern Art The ghostly creature materialising from peaty darkness in Barrie Cooke’s Megaceros Hibernicus – commonly known as the great Irish elk – became extinct thousands of years ago, possibly because of its outsize antlers. It was the largest deer ever, judging by skeletons found in bogland. Cooke, who died last year, visualises the antlers as luminous antennae, crackling with energy.

2 Le Petit Déjeuner By Sarah Purser, 1881 National Gallery of Ireland Sarah Purser was a fine portrait artist and a pivotal figure in the development of modern Irish art. This painting isn’t so much a portrait as a subject picture. In Paris, Purser shared an apartment for a time with its subject, the dancer and music teacher Maria Feller. It bears direct comparison with studies of lone women by Degas and Manet. The point is not appearance or resemblance so much as the suggestion of independent inner life. The woman is lost in her thoughts, and her thoughts are her own.

3 Wall of Light Orange Yellow 2000 By Sean Scully Dublin City Gallery The Hugh Lane Like Mondrian or Rothko, Sean Scully has developed a very limited but immensely flexible visual vocabulary. His compositions are built from blocks of tone and colour arranged in right-angled, grid-like structures. As the title Wall of Light suggests, the blocks needn’t be solid and heavy; they can be radiant and airy. The idea came to him when he was looking at walls saturated with light in Mexico in the 1980s. The room devoted to his work at the Hugh Lane is a must-see.

4 An Abstract By Mainie Jellett, undated National Gallery of Ireland A pioneering Irish modernist, Mainie Jellett went to study cubism in Paris with Albert Gleizes. She had developed an academic version of the revolutionary pictorial approach to rearranging the visual world discovered by Picasso and Braque. This composition benefits from a beautifully controlled tonal palette.

5 Burren Land By Anne Madden, 1960 Crawford Art Gallery, Cork Although she spent her early years in Chile, the Burren in Co Clare, where she spent a great deal of time during her teens, was really Anne Madden’s formative landscape. While there she became immersed in the land, running wild, as she put it later. She married Louis le Brocquy in 1958 and they moved to France. The chopped impasto of the monochromatic composition vividly evokes both the pared-back, intricate limestone landscape of the Burren and the nature and fragility of bone.

6 Shannon Series Painting By Camille Souter, 1980 Irish Museum of Modern Art Camille Souter brings an extraordinary intensity of vision to subjects and motifs that would normally be overlooked: anomalous urban spaces, empty boglands and workaday objects. Her interest in seeing the land from the sky took her in an unexpected direction: she took flying lessons, which led to a rich body of work.

Where to begin with Yeats? Most public collections have outstanding works. But Sligo is exceptional because it was so important to him, and because the local librarian, Norah Niland, built a fine collection of his work on her own initiative. Yeats chose to give this painting to Sligo in 1954. It had been a birthday present to his wife, Cottie, two months before her death, in 1947. In it he, his wife and his uncle George Pollexfen walk at Rosses Point – which they almost certainly never did, in real life. But it is a statement of emotional priorities.

8 A Convent Garden, Brittany By William John Leech, circa 1913 National Gallery of Ireland William John Leech is a wonderfully free, instinctive painter, and this relatively early painting is a knockout. The novice, bathed in sunlight, is a picture of serene contemplation. The model is Elizabeth Saurine, who was the artist’s first wife. In 1904 Leech was unlucky enough to contract typhoid, in Concarneau in Brittany, and during his recovery he stayed in a local hospital run by nuns. Its garden is the setting.

The portrait painter John Lavery, though based in London, remained closely involved with Ireland – the Irish delegation stayed in his house during the Treaty negotiations. Like many Irish and British artists, he went to study in France and painted at Grez-sur-Loing, the picturesque artists’ colony on the edge of the Forest of Fontainebleau and the location of this painting.

Robert Ballagh occupies a unique position in Irish cultural life. He has painted many self-portraits. This ambitious work features his characteristic combination of wit and assiduous technique. It’s a family group. He avoids depicting his own face, substituting a book – How to Make Your Art Commercial – instead, a reference to how difficult he was finding it at the time as a professional artist.