Cottage charm on sunny side of Howth hill for €495k 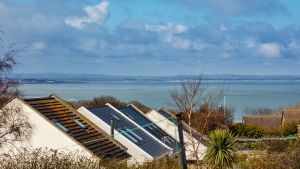 Howth village is a special place. It has retained its fishing roots while growing its tourism, mainly day-trippers on weekends (when not in lockdown).

The vacationers have changed the dynamic of the harbour area and many locals steer clear when it is crowded. High on the hill, but just a 15-minute walk from the waterfront, St Peter’s Terrace is far from that madding crowd.

Number 65 is a mid-terrace, artisan cottage on the sunny side of the street with a 20ft-long, west-facing garden offering sea glimpses.

The 71sq m/764sq ft house is laid out as a three bed, with the main bedroom just off the small entrance hall. The living room is to the right. Some neighbours have opened up the ceiling to expose the vaults above. Bedroom two is to the rear of what was the original house and it overlooks a tiny courtyard.

What will appeal here is the bright kitchen and third bedroom in a single-storey extension overlooking the garden. The room is tri-aspect and its kitchen counter divides the prep area from a second, small living area. While the third bedroom could be used as a home office, it could also be easily incorporated into the kitchen area and opened up more to the rear.

The garden needs some tidying up. The pictures, which were taken a while ago, include a deck that has since been removed (a video accompanying the property’s online listing shows how it looks now). Extending to about 6m, it has pedestrian rear access, providing a short-cut through Balkill and Grace O’Malley to the Dart – a 15-minute walk. The car park at the Summit is about 20 minutes on foot.