Where to stay, rent or buy in Brittas Bay

A home for the holdidays with an easy commute to Dublin 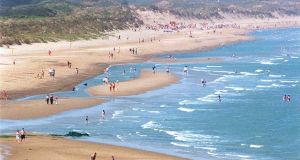 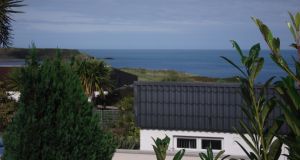 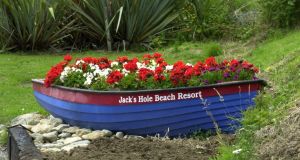 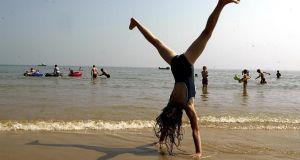 With the rise in temperature, people flock to the beach, at Brittas Bay, throughout the summer. Photograph: Eric Luke 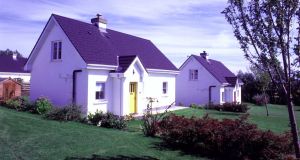 A three-bedroom house in Brittas Bay Holiday Village is asking €185,000

Brittas Bay boasts one of the finest stretches of sand on Ireland’s eastern seaboard and for much of the year, its 5km stretch can be virtually empty. Apart from those sunny days when the car park is full to capacity and the dunes heaving with day-tripper, Brittas can feel like the resort that time forgot.

“Brittas is alive for six weeks only, otherwise it’s stone dead, which is just the way most people who have a place here like it,” says one blow-in who’d rather not be named. “The beauty of it being just 62km from Dublin, a 75-minute drive tops, is that while the family decamps here for the whole summer, workers can still commute up and down to Dublin as is necessary.”

The rest of the time the locals and second homers have the place to themselves and that’s just the way they like it.

Brittas gets into your blood, she explains. “Parents want children to have the same experiences they had when they were growing up. Properties stay in the one family for generations with grandparents often leaving the properties to their grandkids.”

Much of the best people-watching goes on in the coastal community’s many caravan parks – although calling them caravans doesn’t really demonstrate their established nature or their size, for most have been pimped up with decks and extra rooms to become real homes away home. One resident described Stauntons, one of the original pitches, as “the most magical, really old-fashioned place”.

It is a dream place for children. Here they can run through the dunes and onto the beach and that freedom creates a vastly different experience from the one they will get from spending time in a villa in sunny Spain or Portugal.

On the downside, this is a transient place, one local laments. “People outgrow it. Families with young kids grow up to be teens and then older teens and no longer want to keep coming down, so many eventually sell and move on. There are no older people.”

Brittas Bay village is a development of holiday homes that is equidistant between Jack White’s pub and the beach. The scheme has its own tennis courts and a football pitch. Holiday rentals are available through Trident Homes, which has three-bedroom properties from €665 to €840 per week in high season. They are booked out for this summer, but rentals may be available from individual owners.

AirBnB has some options for Brittas stays. A beach-side caravan that can sleep three to four costs €42 per night while a four-bedroom bungalow that can sleep nine costs €190 per night. The landmark McDaniels pub is currently closed but several of its three-bedroom chalets are available for short-term lets. Booked out throughout the summer, there is availability in September and October when a two-night stay will cost about €300, through Air BnB.

And if you fall in love and want to buy, what’s for sale?

There has been reams written on how properties in the locale change hands for silly money but happening on a shack that you could convert is unlikely given the area’s popularity. If you’d like to build your dream home together, there’s a site of almost two acres, about two and a half miles from the beach, for sale for €35,000 through SherryFitzGerald Myles Doyle but you will need to get planning to build. A mobile home at Potter’s Point, one of Brittas’ best-known caravan parks, has a deck and is asking €180,000 through Rob Noble Property Consultants. Described by one wag as being “awash with SUVs”, the setting also boasts a golf course and tennis courts.

The same agent is also selling 25 Rockfield Park, a four-bedroom detached villa-style house with a great viewing deck. Originally built as a holiday park but now having half its homes occupied all year round, number 25 was constructed in the early 2000s and is asking €450,000.

A three-bedroom house in Brittas Bay Holiday Village is asking €185,000 through agents SherryFitzGerald Catherine O’Reilly while a similar three-bed is listed in Allsops’ next online auction, with a reserve of €150,000 to €160,000. See allsopireland.ie

The beachfront mobile home park, Jack’s Hole Beach Resort, which is home to about 70 pitches, has what one resident described as “an extremely beautiful rock star beach”. At present there are seven or eight units for sale. These vary in price from about €35,000 to €80,000, according to Aine Brannock, manager at the resort, depending on their location within the scheme, with the frontline mobiles commanding the highest prices.

At the top end of the market is Wolf Rock, a four-bedroom, four- bathroom, architect-designed property, with a wine cellar, private access to the beach and stellar views, across to Wales on a clear day. Designed by Robin Mandel, it is asking €1.5million through joint agents Colliers and Knight Frank, a drop of €500,000 since it came on the market around two years ago.

Where to eat, where to have a coffee, ice cream etc

Run by Belinda Gildea, the Bay Café is the centre of things at Brittas Bay. The dog-friendly establishment is open for breakfast, serving pancakes and yogurt through the day and its summer opening hours include evening meals like fish and chips and steak frites on Thursday, Friday and Saturday evenings until 8pm.

Beyond that you have to really get into your car to tickle your taste buds. The Duck is the delicious casual dining restaurant at Marfield House, a Relais & Chateaux country house just beyond Gorey, which is about a 32-kilometre drive. You can head inland for bar food at Brook Lodge at Macreddin village, about a 27km drive. The evening meal offer at the Strawberry Tree is especially strong but it will mean you need a designated driver.

Afternoon tea at Hunter’s Hotel, the old coaching inn outside Rathnew, is old fashioned in a lovely way. They still curl the butter and serve vegetables from the garden. The décor hasn’t changed in decades and is part of what makes it feel so special.

In Wicklow town, 12 clicks away, the Wicklow Wine Company stocks a good selection, as well as cheese and artisan breads, and The Lighthouse, an extension of fish shop man Alan Hegarty’s premises that overlooks the estuary of the river Vartry, is a must-do for pescavores.

What about Jack Whites, a long country mile of a walk up from the beach to the M11? It serves pub grub and a selection of toasties as well as big Irish breakfasts and offers excellent wifi connectivity if you have a proposal deadline looming.

On the rare days that the mercury rises to a level that draws a Dublin crowd to jam the car park, the beach the dunes are so vast that there’s plenty of room for everyone.

The gallery to look at

Brittas is blissfully free of any form of conspicuous consumption. For now the only art on show is the drawings in the sand made by kids and adults alike and washed away with each new high tide, but if you like art photography, then local resident and former Observer Life magazine picture editor Jennie Ricketts online gallery will be worth checking out in a couple of weeks as it is currently being upgraded.

The beach is the star of this location. Its 5km of breakers, dunes and white mica fine sand make it a resource that is used from the break of dawn, when horses rule the run, through the day as dog walkers and joggers take to the shore with sandcastle-making kids bringing up the rear in the afternoons. Would-be wave jockeys are put through their paces at Brittas Bay Surf School. Up in the dunes you will probably happen on families barbecuing on disposable units, lovers wrapped around each other (cough loudly if you’re going to pass close by) and gangs of teens who made their arrangements through social media.

Dog walking on the beach is the best place to get acquainted. Instead of “hello” say “good”, with an inflection at the end, as if asking a question, and see how you get on. At weekends you’re likely to tangle leads with South County Dubliners rather than locals.