Buyer intends to complete castle’s refurbishment for residential use 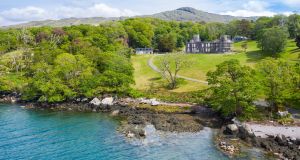 When it comes to surprise property sales of 2020 Glengarriff Castle will be up there. The half built shell of a castle in west Cork was brought to market in June, – towards the end of Lockdown One – seeking €2.75million. It seemed an unlikely prospect in a difficult property year for a roofless and windowless Gothic pile whose heyday was in the 1790s. Well how wrong could the naysayers be? Turns out there was a near unseemly clamour for the waterside property with it going sale agreed close to its asking price within just four weeks of launch to the market.

Sherry FitzGerald selling agent Roseanne de Vere Hunt declined to comment on the details of the sale but it’s understood contracts have now been signed. Overlooking Glengarriff Bay the 1,147sq m (12,342sq ft) property on 87 acres enjoys one of Ireland’s most idyllic settings and this is what de Vere Hunt says was its major appeal.

“In terms of a romantic view of Ireland this captured everyone’s imagination. I really thought I’d have this on the books for five years but buyers from the US, UK and Ireland were queuing up immediately. In fact I am still getting enquiries about it or whether we have anything similar.” Though De Vere Hunt would not say where the eventual buyer is from she confirmed that they plan to complete the castle’s refurbishment for residential use. The completion of such a project is likely to require a similar investment in addition to the purchase price.

It’s a happy ending for Glengarriff Castle whose UK-based owner purchased it in 2014 and had planned to turn the shell into his dream home but died before he could do so. His family then decided to place the property on the market through joint agents Sherry FitzGerald Country Homes and local agent Sherry FitzGerald Ray O’Neill.

A programme of restoration works had been drawn up by Chris Southgate an engineer specialising in historic conservation and these were included in the sale. Southgate is a proponent of Building Health Ratings for properties looking at the impact of buildings on health and his design for Glengarriff included a flow of natural air through the building. It’s a selling point that’s gaining traction among wealthy property investors seeking refuge from an increasingly toxic world.

De Vere Hunt says recent activity on country properties is comparable only with the boom of the early 2000s. While there is expat and local interest she says there is also a cohort of serious overseas investors seeking luxury hideaways. “Compound living has become a market. I currently have two active buyers seeking a property to accommodate several generations of extended family where they can congregate comfortably a couple of times a year.”

Originally constructed for Colonel Simon White, brother of the first Earl of Bantry, Glengarriff Castle later operated as an exclusive hotel until 1975 when it closed. It was then purchased by a German who also intended to transform the castle to a dream home. To avoid punitive taxes at the time for larger buildings he removed the roof which further hastened its decline. When a Cork consortium bought in 2003 it secured planning permission to restore the property to a luxury hotel with apartments. It was then placed on the market with a €20 million price tag. Having refused a €15 million offer for the estate, it eventually sold in 2014 for €1.6 million.