This four-bed house is in turnkey condition, with a large, quiet rear garden 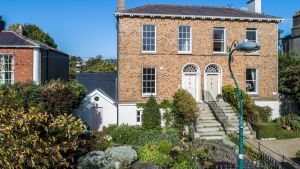 Conveniently located, Charleville Road in Rathmines leads to Leinster Road at one end and Rathgar Road at the other, making it about three minutes’ walk to the main thoroughfare of Rathmines and just under 2km to St Stephen’s Green.

“One of the best things about Charleville is that it is really quite a secret road,” says the owner. “My husband and I were out for a walk in the area about 21 years ago, when we had a lovely house off Dunville Avenue. There was an open viewing for number 14 and we popped in as gawkers. But we really fell for it on the spot and, despite having no kids at the time, we bought it there and then.”

Now more than two decades and four “almost reared” children later, the owners are moving on. When they first bought the house they sought to address the basement level: “We saw work that architect Stephen O’Dea, of O’Dea and Moore, had done and really liked his designs, but we had to wait for over 18 months as he was so busy.”

The owner says while most people at the time were amalgamating the two rooms at basement level – and she considered this the only option too – O’Dea saw the potential to the side, which was overgrown with bushes, drainage and access for bins.

“I was afraid we would lose some of the garden but Stephen assured us we wouldn’t lose a blade of grass. It was so worth the wait, as what he designed was something really special. By extending to the side, we gained another living room and kept the whole garden.”

This also allowed the room to the front at basement level to have versatility for the past two decades to suit the family’s needs.

It started life as a playroom, then became the childminder’s room – as it now has independent access to the side thanks to O’Dea’s design. It then became a granny flat and is currently used as a teenager’s bedroom. “They need to have a bit of independence and be near the fridge. Here, the kids have the freedom of the basement level in the evenings, and we have peace and quiet in the upstairs reception rooms.”

Extending to 257sq m (2,766sq ft) over three floors, the semi-detached Victorian has an unusual claim to fame in that it was one of the first properties to have plumbing on the south side of the capital, a fact noted in Dublin’s Victorian Houses by Mary E Daly and Peter Pearson.

The process at the time meant that the effluent was discharged into the Swan river, so by 1892 houses 11-14 had loos, taps with running water and what would have been a huge attraction at the time – an upstairs bathroom.

Number 14 has further historic significance in that during the late 1880s – and before the plumbing – father and son artists John and Jack B Yeats lived here.

One of the selling points of this property besides its location, four fine bedrooms and four reception rooms all in turnkey condition, is the rear garden, measuring 79ft by 35 ft, with a patio and raised lawn: “The only thing you hear is the church bells [from the nearby Church of Mary Immaculate Refuge of Sinners] as we are surrounded by gardens.”

The family, who have an interest in horses, are looking for a home with room for a pony. While number 14 may not have space for equine pursuits, it certainly ticks a lot of boxes for house hunters in search of a fine original Dublin 6 home.