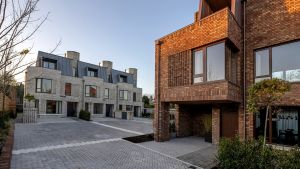 This week the popular Dublin suburb of Ranelagh sees the launch of a brand new street of contemporary terraced houses right in the heart of surrounding Victorian roads. Annesley Gardens, an extension of Dunville Close, is tucked away off Annesley Park, within hot coffee distance of Dunville Avenue’s inviting strip of cafes, boutiques, Rosalin’s everything shop and, of course, Morton’s supermarket.

The new development of 20 A2-rated homes comprises two terraces – one of 17 redbrick three- and four-beds with a second terrace running perpendicular of just three buff yellow brick four-beds. All have zinc detailing, and Alu Clad Carlson windows to match the brick colour.

It’s the latest luxury home offer from Seabren Developments, run by Johnny O’Loughlin and Michael Moran, of the Moran Hotel Group. The pair made headlines 2½ years ago when they purchased the 1.25-acre site for €8.7 million, significantly above its guide price of €4.9 million-plus. The deal was described at the time by selling agent Iain Finnegan of Finnegan Menton as a “record price for a piece of land without planning permission”.

Architectural practice Metropolitan Workshop came on board and helped secure planning with a relatively low-density build design, given the scheme’s proximity to the Luas Green line.

Although utterly modern in appearance, Metropolitan Workshop was careful to reference the surrounding period redbricks. There are chimneystacks, for example, a feature an A-rated home does not need, but as well as helping the houses to blend in, these function as light wells.

The off-centre bay windows are inspired by those on Ormond Road but the interpretation is completely different. A sawtooth edge to brickwork is a repeat of the finish on roof eaves on Annesley Park.

Set out over three floors, the four-bedroom showhouse is by Suzie McAdam Design, who worked with Seabren most recently on a pair of four-storey luxury properties on nearby Highfield Road that came to market in September seeking €3.25 million apiece and sold almost immediately.

Painted in a serene palette of Zoffany and Farrow & Ball colours, the bay windowed living room features built-in cabinetry in an olive shade.

The richly textured kitchen features custom units designed by McAdam and built by Moore O’Gorman, who did all the joinery. It includes rib-fronted units, a detail echoed in the curve of the island. The counter tops have a lovely tactile finish thanks to the use of honed calacatta viola marble, a richly veined cousin of the more commonly seen grey-veined calacatta. It comes from a single block from a quarry in Italy and was supplied and finished by Marble and Granite.

Large sliding doors open out to a south-facing garden with pedestrian rear access, something each of the houses has. The house number is sandblasted into its concrete post and the gateway illuminated by Led strip lights, a welcoming touch on dark evenings.

There are three bedrooms on the first floor, where the master is located to the rear and features a smart shower en suite with brass hardware and the ribbing in the vanity unit echoes those in the kitchen downstairs. This room opens out to a terrace, where a perforated wall in a “hit and miss” brick pattern screens the outdoor space from neighbours.

On the second floor is a further fine en suite bedroom with a large window framing the rooftops of Dublin 6. There are views of the Aviva Stadium and the Poolbeg towers from here.

Not content with engaging just one of Dublin’s top design talents for the showhouse, the developers brought Kingston Lafferty on board to present the three-bedroom showhouse and Róisín Lafferty has delivered a masterclass in layout considerations. The lounge here has a double-height galleried space with a home office set up in the mezzanine space above, and an option to open through to the kitchen for an open-plan feel.

What is different about this set-up is the 11 cubic metres of space dividing the living and kitchen areas and within this zone the utility and laundry have been housed, taking them out of the kitchen.

Double doors from the lounge are designed to fold back and sit flush with a mirror image set of double doors from the kitchen to form a throughway from front to back. When closed, the utility and laundry rooms act as a sound break between the rooms.

This allows for a slick kitchen set-up where dark walnut-stained ribbed units line both sides of the room leaving enough space for a decent sized dining table by the window.

There are two double bedrooms on the first floor where there is also a west-facing terrace of 20sq m that succeeds in feeling like a proper outdoor room. The third bedroom is on the second floor. This dual-aspect space overlooks the terrace and has a smart shower en suite clad in a terrazzo-look, large-format tile from TileStyle.

Under ordinary circumstances half of Dublin 6 would be popping along to open viewings to inspect these neighbourhood newcomers and compare and contrast the showhouse styles. But due to the strict Covid-19 restrictions the majority will have to content themselves instead with scrolling through the gallery of online images.

Four of the homes, constructed by MCH builders, are already sold, according to Sherry FitzGerald selling agent Colm Byrne.