We probably paid too much but we finally found a house

Househunter diary: After 18 months, 100 viewings and countless bids, the deposit is paid and the closing date set 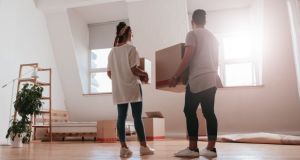 After 18 months, about 100 viewings, countless bids and some devastating disappointments, we (whisper it) got a house.

For four weeks since the phone call from the agent to tell us our very last bid had been accepted, I’ve been trying to hold my tongue, not tell too many people, afraid to jinx it. But with all the paperwork signed earlier this week, full deposit paid and a closing date set, I finally feel I can shout it from the rooftops.

We got a house!

At the beginning of this long journey towards buying our first home together, my partner and I envisaged redbricks, three bedrooms, a garden and walking distance to the city centre. A forever home. Utter notions, we realise now. We got so close with two houses that ticked almost all the boxes, but were outbid by a small sum each time. As the months went by, properties once within our reach slipped away as prices marched steadily higher.

We could no longer afford a “family” home in the areas we wanted to live. We would have to go small, or go much further out. It took a long time for that reality to settle, with me in particular, but we finally decided that for now, area took precedence. We could always move in the future if space became a priority.

The ad appeared in mid-February. If we had stuck a pin in the middle of our ideal area, it would probably have gone right through this house on the map. It was small, yes, but unlike most other houses in the streets around, this one had a garden, and a south-facing one at that.

Walking around at the first viewing, it didn’t make my heart sing with excitement in the same way some others have. But the tummy butterflies were definitely there. It felt right. It made sense. The asking price was well within budget. We could feasibly get this one.

There was one bid in significantly below the asking, so we started strong with an offer €10,000 above. Then we waited. And waited. For 11 days we were the highest bidder, and it looked likely the others would pull out. We tried to remain calm. We had been burned before – once particularly badly – by becoming too attached to a house midway through the bidding process.

A third bidder entered the fray, which seemed to encourage the first back in. Up the offers went, by €5,000 each time, which was new for us. We thought we’d scare our contenders off with big bids, but they had similar tactics.

The price had gone way over the maximum sum we had in mind. But the thoughts of having to start again from scratch, having to go through this horrid bidding process all over again, potentially having to pay even more for a similar house in a few months’ time or, worse still, being priced out of the area entirely, spurred us on. The other bidders were clearly just as desperate.

The agent called to say the owner, satisfied with how high the price had gone (I’m sure they were), wanted the sale agreed soon and had decided to accept the best offer in a sealed envelope process. We had two days.

It was the most nerve-wracking 48 hours of my life. Choosing a figure was fairly straightforward, as we couldn’t afford much more than the last bid. We went for an obscure and uneven sum, just in case the added €65 would clinch it for us in the end.

Soon after sending the email (“sealed envelope bids” these days are done online), the agent called. He couldn’t tell us by how much, but our bid was the highest. It was a surreal moment, standing in the middle of Grafton Street, babbling incoherent words of thanks to an estate agent through my tears. I couldn’t believe we had finally got there.

After paying the booking deposit at the bank on my lunch break the next day, I was into M&S to buy a sandwich when a sales assistant approached with a tray full of tiny plastic glasses of Champagne. A drink never tasted so sweet.

I’ve walked and cycled by the house countless times since, or parked the car within view so I can sit and stare at our hard-won prize. I love the quiet street and its diverse inhabitants, the kids playing in the square on the corner and surrounded by cherry blossom trees. And, of course, the house itself, with its little front garden and the line of red bricks (I cherish every single one) split through the pebbledash on the facade.

It’s different to the house we dreamed of. We probably spent way too much on it. It might not last us forever. But it’s perfect. And in three weeks, it will be our home.