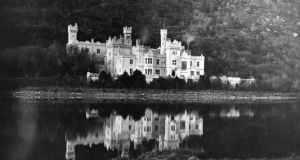 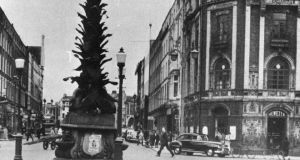 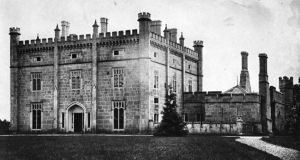 For someone so self-obsessed, James Franklin Fuller left remarkably little archival material behind him. Perhaps that’s why, in spite of his built legacy, few people today know his name. Nevertheless, he was responsible for the design of Kylemore Abbey, Ashford Castle, the Great Southern Hotels at Parknasilla and Kenmare, and Farmleigh, as well as smaller buildings such the Gardener’s Lodge in St Stephen’s Green, which was commissioned by Arthur Guinness at a cost of £2,256. The wonderful terracotta-decorated Gallagher and Co at Hawkins Street Dublin is also his – it was one of the earliest steel-frame buildings.

Born in Co Kerry in 1835 to what anyone, except the eccentric and snobbish Fuller, would have described as minor gentry, he went to school in Cork and Dublin, and then worked in London before returning to become a district architect for the Irish Ecclesiastical Commissions. Setting up his practice in Great Brunswick Street, he had what is described in the Irish Architectural Archive’s Dictionary of Irish Architects, as a “gentlemanly disregard for standard clerical procedure”.

“A few months after opening my offices I discarded the regulation copying-press and the regulation letter-book,” he wrote in his autobiography. “The ‘correct’ thing to do with letters received, was to preserve, docket and to pigeon-hole them... whereas nine out of 10 of them went into my waste paper basket immediately after receipt . . . I kept no ledgers or books of any sort: I could not see the least necessity for them.”

While Fuller may not have seen the point of filing, he was very keen on documenting himself. His 1916 Omniana: the Autobiography of an Irish Octogenarian includes lengthy quotes from reviews of his fiction – he wrote melodramatic novels, and notes on his career and his amorous adventures as a travelling actor in England.

It’s hard to know if he was great fun or a great bore. He claimed never to have owned a razor, an assertion borne out by his marvellous bushy beard, ate only two meals a day and always slept with a window open. In Omniana, he gives some space to outlining his ancestry to prove his pretensions to the aristocracy, tracing his family back to Charlemagne – which turned out to be true. He also boasted of a connection, via his wife, with one of Napoleon’s marshals, and wrote disparagingly of the newly rich who have coats of arms made, to which, in his view, they have no right.

His love of drama and aggrandisement is played out in his buildings, and his style, according to Colum O’Riordan at the Irish Architectural Archive, is less about a particular building style, and more about his ability to design for a certain type of client.

“His speciality was the wealthy landowner seeking to enlarge or modernise an existing property or to build a new house. He had an extraordinary ability to attract, and maintain, these clients, and he listed them reverently in Omniana.”

Marble halls, stuccoed ceilings and galleries, grand staircases, colonnades and follies were the order of the day. And although he never quite got away from his love of steep Victorian gables, he could also show restraint in his quieter civic buildings, which include the former National Bank building on Arran Quay in Dublin.

The Dictionary lists more than 200 of his works but, as O’Riordan points out, Fuller left a remarkably small amount of archival material behind him.

“For one thing he destroyed all letters marked private, once he had read them. He kept no copies of letters he sent himself, and no business records. And, almost uniquely for an architect, he doesn’t seem to have kept copies of his drawings.

“But we do know that there is Fuller material out there; he certainly wrote letters and sent drawings to clients and builders.”

The exhibition, Who Was James Franklin Fuller?, currently on at the Irish Architectural Archive at 45 Merrion Square, marks the 180th anniversary of Fuller’s birth.

“We are hoping it might prompt people with connections to any of Fuller’s many buildings to have a rummage round for relics of the man himself.

“It would be great to have reassembled at least a part of Fuller’s archive by the time we come to mark the centenary of his death in 2024.”

The things that mattered most to Fuller – pedigree, social connections, a “gentlemanly” disdain for the necessity of working for a living (which perhaps accounts for his attitude to filing and the relative lack of any architectural musings or descriptions in his autobiography) – are ironically perhaps the most potent reasons why he is relatively forgotten today.

And yet his buildings are part of the fabric of Ireland, just as much as our Georgian architectural heritage. If you do happen to have another piece to the puzzle of the question of who James Franklin Fuller was, contact the Irish Architectural Archive, who would love to know.

Who Was James Franklin Fuller? runs until October 31st. iarc.ie