Those whose journey exceeds 45 minutes more likely to move house 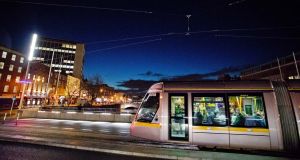 If you live in Dunboyne and commute to work in Dublin city centre, or if you live in Tallaght and get the Luas to work, congratulations. If home is in Mitchelstown, and the office is in Cork city, you can also count yourself one of the lucky ones.

Despite how you might feel about rush hour traffic or packed tram carriages, you enjoy what an international study has determined as the commuter “inflection point” of roughly 45 minutes. Commutes of longer than that eventually become unbearable, the research suggests.

An analysis of the habits of 4,248 Chinese workers over seven years found that individuals whose daily commutes by public transport were longer than 45 minutes were more likely to eventually move to a different home to reduce their travel times.

People who started the study with a commute of less than 45 minutes were more likely to extend their travel time, so that they could move to a better area, buy a home of their own, or take a more desirable job.

“We find that 45 minutes is an inflection point where the behavioural preference changes. Commuters whose travel time exceeds the point prefer to shorten commutes via moves, while others with shorter commutes tend to increase travel time for better jobs and/or residences,” the researchers note.

But don’t be too quick to extend your commute time: according to research published by the University of West England last year, adding 10 minutes each way to your daily commute is as bad for your overall job satisfaction as getting a 19 per cent pay cut.

Other studies, including one by Ford Motor company of 5,500 commuters in six European cities, found that workers rank their commute as more stressful than going to the dentist or, you know, actually working.

Figures published last year by Ireland’s CSO showed that by international standards, average commuting times in Ireland are, on the whole, pretty bearable.

Commuters in Meath and Wicklow spent the largest chunk of their day getting to and from work in 2016, at 34 minutes. At the other end of the scale, commuters in Galway city had the shortest average commute of just 21 minutes, while two in three commuters in Waterford city spent less than half an hour getting to work.

Contrast that with the average global commute time of 41.6 minutes, and it doesn’t look so bad – or with the average daily commute time in England, which is now around 60 minutes, up from 48 minutes in the past two decades. One in seven English commuters now spends at least two hours on their daily round-trip commute, the University of West England research found.

The key to surviving your commute, however long or punishing it might seem, may be to reframe your experience of it.

A paper published in the Harvard Business Review found that small rituals to take back control of the time help with this – for example, learning a new language or listening to podcasts. If you’re on public transport, the experts suggests updating your calendar or reading the news online – or even breaking the international code of commuters everywhere, and striking up a conversation with your fellow passengers.