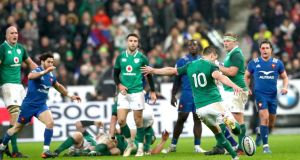 A capacity crowd. A packed venue. A slew of competing emotions – eagerness, excitement, nervous anticipation – and every heart primed with the desire to win. Yes, it’s the Aviva Stadium, and Ireland’s long-awaited Test match against New Zealand.

Whatever the result of Saturday’s epic sporting battle, however – particularly of the much-vaunted outhalf encounter between Johnny Sexton and Beauden Barrett – more than a few hearts will be pumping when a pair of Sexton’s boots comes under the hammer on the second day of Sheppard’s Dublin & Provincial sale in Durrow, Co Laois.

The boots are lot 1267 in the auction, which will be held on November 27th and 28th. The catalogue says: “Provenance: Jonathan Sexton. The leather skin of the instep and toe is broken from stamping studs and the pounding of giants, accidental and otherwise. These boots record the history of every kick and every step. The right shoe is the one that beat the French with the last play, Le Drop, in Paris. These are his lucky boots: the boots won the Grand Slam, the Pro14 and the Champions Cup. He has never been beaten in these boots.”

All proceeds from the sale of lot 1267 will go towards the medical treatment of eight-year-old Anna Browne, from Mallow, Co Cork whose family are trying to raise money to pay for ongoing treatment to help her cerebral palsy.

A pair of bashed-up rugby boots may seem to sit oddly among the 1,000-plus pieces of elegant antique furniture, classic paintings and quirky decorative objects that make up this sale. When Sheppard’s hits the headlines, it’s usually for selling a chunk of Chinese porcelain or other oriental art object for huge money. But the Durrow auction house may well find itself on the sports pages as rugby fans, in Ireland and abroad, battle to outbid each other and acquire the boots of the man who has acquired living-legend and national-treasure status.

And when the hammer falls, well, it’s another sort of grand slam, isn’t it?

All things considered in remodelled Blackrock two-bed for €645k