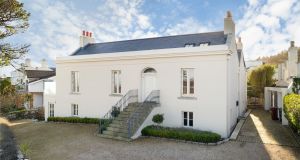 While rural coastal properties appear to be having a moment if house-hunter interest is anything to go by, seaside homes in the capital are holding up nicely too. No sooner had two houses on one coastal site close to Dalkey Harbour quietly sold for €6.2 million last month – one of the biggest residential transactions of 2020 – when news came through of a snappy sale a short distance away on Coliemore Road.

Cnoc Aluinn at 92 Coliemore Road is a late-Georgian villa that launched to the market just as the lockdown was lifting in June seeking €3.25 million. At that stage it was anybody’s guess as to the level of interest for properties in that price bracket. Lovely though it may be, houses along here don’t tend to sell overnight, and Cnoc Aluinn’s position on the non-coastal side of the road with limited sea views suggested it might have its work cut out.

As it transpires such concerns were unfounded with the property understood to have sold to a local buyer in recent weeks for €3 million. Not a bad outcome within just three months for selling agent Vincent Finnegan (who declined to comment on the sale). In spite of ongoing Covid restrictions, the four bed and one-time home of writer Ernest Gébler attracted interest both locally and from overseas having undergone a substantial upgrade after it was purchased in 2015 for €2.5 million.

Moving inland, another fine property with a history sold last week when Marshfield House in Leixlip, Co Kildare went for auction. The lovely Queen Anne-style home on 8 acres with a quarter of a mile of Liffey frontage and fishing rights over the river had four active bidders at its on-site auction when local agent Philip Byrne of Coonan Property finally brought the hammer down at €1.18 million. The buyer of this beautifully appointed property is understood to be an “international family”.