Cottage chic: Space-saving tips and tricks from our rural Irish past

There was no such thing as clutter in farmhouses of old, where ingenuity was essential 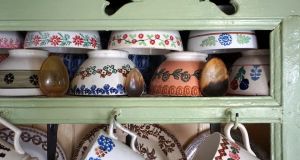 Spongeware printed ‘basins’ and horn spoons hung in eye-level slots, as was traditional up to the early 20th century, on a County Cork dresser. Photograph: M Duerden

We can gather a lot from our rural Irish ancestors, such as how to furnish our homes economically and sustainably while saving space in bright, colourful ways.

When I began researching Irish country furniture in the late 1980s, it was still possible to track down unmodernised, “authentic” arrangements. My photographs from the households who welcomed me indoors have grown more interesting and important 30 years later. These “fieldwork” photos are some of the most vividly colourful ones augmenting my forthcoming book, Irish Country Furniture and Furnishings 1700-2000, which focuses on less affluent times.

What we now refer to as “clutter” was not an option in most farmhouses prior to the mid-20th century. Farming families usually lived in comparatively confined spaces, as these were economical with materials and fuel for heating and lighting. So every object was hard won, each typically lasted for generations, and things were acquired that served multiple purposes.

People were ingenious in the ways they kept their houses clean, warm and lit before the advent of electricity and running water. Recycling and reuse went without saying; it was almost an instinct. People’s arrangements were essentially minimal.

The dresser (or smaller hanging dresser), was the pride of the farmhouse kitchen. It was the main status symbol, holding and showing off to best advantage the most fragile, precious things: the “ware”. The display was organised to minimise dusting and show everything in its best light. So bowls (called “basins”) for eating and drinking were arranged upside-down, and if people had spoons, they displayed them at eye level in specially made slots.

Up to the early 20th century, horn from farm animals was reserved and set aside after slaughter, and cow horn was crafted by the horner into spoons for eating. Some had fashionable shapes imitating those made in silver, and of course they were smoother on the lips, and easier to wash up than wood.

Plates were often leaned forwards on to special bars, again to avoid dust while reflecting firelight, or to attract daylight if placed opposite the front door. Large meat platters, which were seldom used, had a purpose-made, tall shelf. The base of the dresser was less decorative, and sometimes had a coop to accommodate hens, encouraging them to lay through the normally barren winter months.

Taking photographs in museum settings can be unpredictable. The morning I set up my camera in the colourful Ballyveaghmore Farmhouse (reconstructed in the Ulster Folk Museum), to take a photo for my book’s front cover, brought its own surprises. I left the kitchen’s half-door open, allowing daylight to stream in. Pretty soon a curious goat and her playful kid (grazing freely in the folk park) trotted right into the scene. This was a comical reminder of what the half-door was for. The doors saved glass and provided ventilation and daylight while separating farm animals from children.

Many people still remember their mothers saving each hessian or woven cotton bag, used to hold animal feed or flour. Flour bags were soaked then scrubbed to remove any print, and then resewn to make everything from pillowcases to bedding (the weave was beautifully soft). Quilts, tablecloths, curtains, clothing, babies’ nappies, tea towels, bags, aprons all resulted.

It was only on close examination that I realised the entire underside of the thatch above my head had been beautifully lined with flour sacks, nailed up tightly, then whitewashed. This brightly reflective ceiling bounced light around the whole kitchen, in contrast to the black, dusty unlined thatch of other traditional houses. This helped keep everything clean, at minimal cost, especially when weaving, spinning or lacemaking was being done in the kitchen.

Up to about 1900, furniture was traditionally painted to imitate fashionable woods, such as oak or mahogany, with skilful “wood-grained” finishes. When colourful gloss paint came on to the market, bright colours became popular and earlier graining was painted over. Some furniture was repainted so frequently that many coloured layers accumulated, and usually all the kitchen woodwork (stairs, windows, joists and all the furniture) was painted to match.

To keep the kitchen bright, the upper parts of the walls might be painted a paler colour, and the lowest areas had contrasting darker gloss paint that was practical as it showed less dirt and could be washed. This decorative yet practical colour scheme occasionally survives in some old farmhouses. Visually it echoes the panelled timber wainscot and skirting boards, which more affluent houses installed, to protect the lowest sections of plastered walls.

Combinations of colours became popular, so the backing boards of dressers and the panels of doors were often picked out with contrasting, paler shades. Space was frequently saved by building a dresser into the wall that separated the kitchen from the parlour, or by recessing it into an alcove.

Other clever designs that saved space and timber simultaneously include the “falling table”. This hinged on to the wall and fastened up vertically against it when no longer needed. Its minimal design was so popular I discovered it was used in every county of Ireland by the early 20th century, and typically only needed one hinged leg.

Some examples cleverly doubled as window shutters or cupboard doors, or were fixed by rings on to a wall bar, enabling the table’s position to be varied. Such space-saving designs are as useful in today’s kitchens, as they always were.

Vernacular chair makers, who had to manage despite a shortage of timber, knew their chairs had to withstand use on uneven or damp floors. So the legs typically lacked interlocking stretchers, and instead each leg was separately wedged into the seat, and so could be replaced fairly easily by a resourceful householder if necessary.

Surviving examples often have one or two slightly different-looking legs, to bear out this theory. Unlike more fragile, fashionable furniture that had hidden construction, wheelwrights or “hedge carpenters” favoured “honest or revealed construction” that made replacing parts straightforward. To disguise a mixture of different timbers being used to make one chair, they were traditionally unified by being painted.

Large families living in small houses found ingenious ways to accommodate everyone by night. The dual-purpose settle bed was a bench that folded outwards to form a wide floor-level double bed. Placed near the fire, it conveniently contained its own bedding. When opened out, with its four enclosing high sides, it served as a playpen for a toddler, kept safely away from the ever-burning turf fire.

Other beds could be folded away or cunningly disguised, typically to make the parlour more versatile. The most popular was the “press bed”, which looked convincingly like a tall cupboard. But when the doors opened, a slatted double bed on hinges was lowered down for use. Modern versions of these beds have enjoyed popular revival in small apartments. I have slept soundly in one, by day concealed invisibly into the bookcase of a front hall, in a town house with no spare bedroom.

The Irish Agricultural Museum, near Wexford, has on display a “chest of drawers bed”. As the name suggests, it disguises itself perfectly as a chest of drawers that can be opened out to become a double bed. All these designs lend themselves brilliantly to reinterpretation by contemporary designers: making adaptable furniture for small spaces.

Recycling may be a modern preoccupation, but it was a way of life in rural 19th-century Ireland. With the advent of the creameries after the late 19th century, rather than transporting butter in firkins (small barrels), it was packed into tapered pine boxes. Each box began as a flat pack that, once assembled and nailed together, held 56 pounds of butter, emblazoned with each creamery’s number, logo and name.

After use, many butter boxes found new life as fireside seats. Their bases were often disguised by painting, and their lids were fitted with hinges and padding, then covered with matching upholstery. All sorts of things could be stored inside, and some had elaborately lined and compartmentalised interiors for knitting or sewing equipment.

Cork’s Butter Museum collects and displays a range of these, and the Ulster Folk Museum recently purchased a pair in blue and brown, with finely embroidered needlepoint seats. DIY magazines probably published ideas for these conversions, I would love to know if any reader is aware of such an article. claudiakinmonth.ie