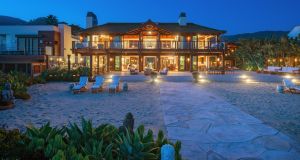 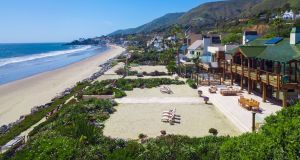 The Thai-inspired complex consists of a main house and a guesthouse and sits on a 1.2 acre site on Broad Beach road.

It’s a bold move with Malibu one of very few places in the US to successfully achieve $100m-plus home sales. If successful it will be quite the return for the Brosnans who bought two sites in 2000 for $7.35 million which they then combined into this property, known as Orchid House.

According to Variety magazine, they lived in the ranch house that stood on the site for several years before knocking it down and building a Ross and Ralph Anderson designed house inspired by their time spent in Thailand.

The property has five bedrooms and 14 bathrooms and is landscaped with palm trees, tropical flowers, courtyards and wraparound porches.

Inside, walls of glass and foldaway doors make the most of the ocean views while handcrafted woodwork, wide-plank teak floors and scissor-truss ceilings add to the exotic theme.

There is a home cinema with tiered seating, a bar, and a surround sound system as well as a mirrored gym and games room which is currently being used as a recording studio.

There is also a spa with a sauna, steam room, Japanese soaking tub and cold plunge.

Outside, there is a saltwater pool, two glass-enclosed outdoor dining areas , a gas fire pit, and an expansive sandy area with a path leading to the beach.

Brosnan, originally from Navan in Co Meath, was the fifth actor to play James Bond and starred in four movies between 1995 and 2002.

In 1996 he set up a Los Angeles-based film production company called Irish Dreamtime, which produced The Matador and The Thomas Crown Affair.

Brosnan married American journalist Keely Shaye Smith at Ashford Castle in Co Mayo in 2001. Smith is known for her work as an environmental activist and TV producer and was an environmental correspondent for ABC’s The Home Show for six years.

According to the Los Angeles Times, the property is the eighth-priciest home currently on the market in LA County.