Searches for homes valued at less than €100,000 increase six-fold 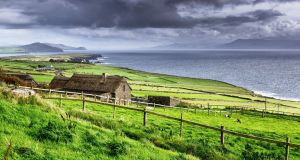 At a maximum price point of €500,000, searches countrywide were up eight-fold on September last year

House hunters are undeterred by the pandemic, and Atlantic coastal cottages are seeing a big search boost, latest figures from MyHome.ie show. Traffic to the property website in September was up 50 per cent compared with the same month last year, as the number of those looking for a home increased despite Covid-19.

Cottages outside Dublin stoked significant interest among visitors to the site, which is owned by The Irish Times, with searches doubling year on year. The Wild Atlantic Way counties of Kerry, Mayo, Cork, Donegal and Galway top the list for cottage-seekers. There was a four-fold increase in such searches in Kerry, specifically for cottages priced under €100,000. Mayo saw a three-fold increase in cottage searches, searches in Cork were 2½ times greater, and searches for Donegal and Galway doubled.

“I think potential buyers are looking at options further afield – this can be seen by the increase in searches outside the traditional commuter belt,” said Angela Keegan, managing director of MyHome.ie. “Buyer sentiment remains really strong with a significant increase in searches in coastal counties with cottages attracting a lot of interest.”

Across all property types, bargain hunters were out in force in September with searches for homes valued at less than €100,000 up six-fold on the same month last year. Cork and Leitrim, both popular with holidaymakers, saw a six-fold increase in searches at that price point.

Overall, searches for properties valued at less than €300,000 quadrupled. There was significant interest at this price level in Cork and Wexford, where searches increased eight-fold.

At a maximum price point of €500,000, searches countrywide were up eight-fold on September last year.

Across the provinces, interest in properties in Connacht and Ulster proved strong. In the west, Galway city outranked the county, with property searches up four-fold there compared with September 2019. Searches in Connemara’s Clifden were up 2½ times. Mayo was the next most popular Connacht destination with a 3½-fold increase in property searches. The ever-popular relocation destination of Westport, along with Louisburgh and Ballina all attracted strong interest. Searches for homes in Donegal, Sligo and Leitrim were up 2½ times.

In Leinster (excluding Dublin) searches for properties in Kildare, Meath, Laois and Offaly were all up 250 per cent on September last year. Brittas Bay topped the list in Wicklow with the beach bolthole, a favourite of Dubliners, getting 2½ times more online property searches compared with the same month last year. In neighbouring Wexford, Rosslare experienced a 400 per cent increase while searches in Ballymoney and Enniscorthy doubled.