Student digs: the house rules that make it work 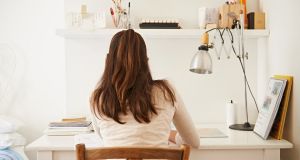 Dublin has about 75,000 students but property company CBRE estimates that there are bed spaces for just 14,000 students in the capital.

With more than 231,000 students across the country heading to college in the coming weeks, the annual hunt for accommodation is well under way – and tougher than ever. The situation is not just acute in the capital, but also in university cities such as Galway where, this week, a Twitter storm blew up over an anecdote about a Galway landlady who hosts numerous students in her home at hefty rents, and asks them to pack up and leave at weekends so that their rooms are available for Airbnb.

Dublin has an estimated 75,000 students but property company CBRE estimates that, between the private sector and university campus accommodation, there are bed spaces for just 14,000 students in the capital.

“Owing to the nightmare that accommodation is at the minute, with Dublin’s shortages of other accommodation options, we see that students – international and domestic – are opting to consider renting a room,” says Yvonne Finlay, managing director of operations and partnerships at Homestay, a website that matches hosts and guests for short and long-term stays in private homes.

“For hosts, there’s a whole lot of advantages, in the sense that they’re not bound by contracts or setting up services or long-term agreements,” says Finlay. Similarly for students the process is easy – they don’t have to take out year-long leases, but can simply book accommodation for the portion of the year that they are required to be at college.

It’s a busy time of year for the agency as students scramble for rooms: “We’re getting a lot of calls in specifically from mammies who are calling on behalf of their children to just try and get something sorted.”

Joanna Keaney from Monkstown in Dublin began renting rooms in her home to students after her son went on Erasmus to Spain.

“We decided it was a waste not to let them out on a short-term basis to students, as there is such a housing crisis in Dublin.

“All my students have been lovely and a pleasure to have in our home. They can sometimes be from overseas and want to improve their English, so they like to practise their English in conversation with the family.”

Included in her rent of €26 per night, are all utilities and a light breakfast, although the students have access to the kitchen and can prepare their own food.

The expectation of full or half-board, once synonymous with the idea of digs, has somewhat waned, according to Finlay. “Students aren’t going to want to sit down every evening and have a meal,” she says. “It means the host is a bit more independent, and they don’t feel they constantly have to mind the person coming in under their roof… The host can feel they’re monetising their asset but not worry that they have to babysit a student.

“On the host side, they’re obviously looking to earn a revenue stream, but also from a guest perspective – particularly for an international student, or someone coming up from the country to Dublin – there’s a sense of security. If they’re going to book a room with a family in place, they’ll be able to help them out in their first few weeks till they find their feet,” she says.

For the stay to work for both parties, it’s a good idea to have a clear set of house rules. For Joanna Keaney the rules are these: lodgers are allowed in all rooms except her family sittingroom and smoking is not permitted. She also says it is important to secure a deposit – such as one week’s or one month’s rent – in advance.

Another Dublin landlady who did not want her name to be used in this piece advises potential hosts to build some tasks into the house rules from the start. She makes it clear to lodgers that they should load their plates into the dishwasher, tidy up after making food and do their own laundry on a designated day of the week. She suggests that it’s a good idea to allocate a shelf in the fridge to each lodger.

In return for a steady income, hosts should provide clean, airy accommodation with study space as well as enough storage to take a student’s books, clothes and equipment.

Some hosts rent their rooms on a Monday-Friday basis, and Finlay says they have seen an increase in this type of let, usually driven by hosts who want some privacy at weekends.

This potentially makes it possible for hosts to list their rooms through other short-term stay sites such as Airbnb, which could mean students having to pack their belongings up each weekend; Homestay doesn’t allow or recommend this kind of double booking.

“You can’t police it 100 per cent of the time,” Finlay says, but she would be surprised if a host chose to go to the trouble of turning rooms around every weekend. “It would be a massive undertaking... it’s so much hassle.”

There’s a strong tax incentive to rent out a room: hosts can now earn €14,000 a year tax-free from renting out part of their property, thanks to increases in the rent-a-room tax credit scheme in recent years.

The scheme is not just restricted to your spare bedroom – you can also claim the tax relief for a standalone unit with a separate entrance, once it’s attached to your main property.

If you rent a room to students during the academic year, and then rent it out on a short-term basis, such as through Airbnb, for the summer months, the income you earn then must be declared separately.

If the unit you are renting is self-contained but attached to your property – such as a granny flat or basement with its own entrance – you will still be able to claim the tax-free allowance. A tax adviser will be able to outline to situation, depending on your circumstances.

If you are not a homeowner, but rent your primary residence and have rooms to spare that you want to rent to lodgers, you can also claim the relief. But, not surprisingly, many landlords do not permit this type of subletting, so it’s important to check with them first.