Make a move to Ranelagh but beware of spiralling house prices 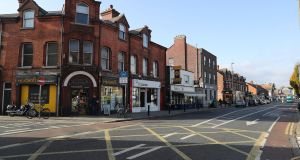 Ranelagh Main Street: if wining and dining is your thing, welcome to your playground. Ranelagh has many high-end restaurants, both on its main drag and beyond. Photograph: Nick Bradshaw

It’s almost inconceivable now, but time once was that Ranelagh was an unremarkable “flatland”, teeming with students and youngsters starting out their Dublin work life. Nowadays, it’s one of the most affluent and coveted addresses in the country, for many reasons.

If wining and dining is your thing, welcome to your playground. Ranelagh has many high-end restaurants, both on its main drag and beyond. With a number of serene green spaces (including Belgrave Square and Ranelagh Park) and every type of service on the doorstep, you don’t need to leave the neighbourhood very often.

It even has its own cinema at the Devlin (117-119 Ranelagh). If you do want to wander further afield, buzzy Rathmines and posh Donnybrook are on either side, while the city centre is about 20 minutes on foot.

For affluent, read expensive. As in, eye-wateringly expensive. Not only do you need deep pockets to buy property or rent here, it also helps to have a few quid in the bank if you want to enjoy all those restaurants and bars.

According to statistics, it’s the eighth most expensive neighbourhood in the country. And while that brings its own benefits – the tree-lined streets, manicured gardens and red-brick houses are certainly pleasing to the eye – it does mean that it is no longer as diverse a neighbourhood as it once might have been.

First-time buyers needn’t despair: there is the (very) odd bargain to be had. 19 Colliers Avenue (€319,000, via Sherry Fitzgerald) is a tiny one-bed house, but has the makings of a great pied-à-terre. 7 Rugby Villas (€395,000, via Dublin Property Rentals) is a two-bed house with an attic conversion, near to Lower Mountpleasant Avenue.

Rentals are still fairly plentiful in Ranelagh, but again, it helps to have a healthy bank balance. Two-bed apartments in Sandford Lodge are about €2,700-€2,800 a month, although it’s possible to secure a two-bedroom apartment for about €2,000-€2,500.

Where to even begin? Start at Dillingers (47 Ranelagh), Cinnamon (87 Ranelagh) or Tribeca (65 Ranelagh) for a brunch that’s worth the trek; the Butcher Grill (92 Ranelagh) is also popular with well-heeled locals.

Host, a relative newcomer, has a brilliantly innovative menu, while Er Buchetto (71 Ranelagh) has stood the test of time, and with good reason. And, if you prefer a more casual dining experience, Wow Burger on The Triangle professes to sling out some of the best burgers in the country. Peperina (25 Dunville Avenue) is off the beaten track and a brilliant low-key neighbourhood bistro.

You’ll never go thirsty in Ranelagh, either: Birchall’s (129 Ranelagh), the Taphouse (60 Ranelagh) and McSorley’s (5 Sandford Road) are all lively for the right reasons. Corrigan’s (27 Lower Mountpleasant Avenue) brings you closer to Rathmines, but is the perfect place for a quieter catch-up.

The Luas (with stops at Ranelagh and Beechwood) gets you to St Stephens’ Green in under 10 minutes. Dublin Bus offers the 11, 18, 44, and 61 routes, all of which get you across the city. It’s also been mooted as a stop on the proposed MetroLink project.

I moved to the area 20 years ago; firstly into a studio flat off the main street. I’ve watched Ranelagh grow and become a buzzy neighbourhood, where everyone looks out for each other. The Luas has made a big difference in getting about, and it’s easier than ever to get friends to come visit as they want to try the great restaurants around here. Ranelagh now has pretty much everything you could ask for, including supermarkets (Lidl and SuperValu, which weren’t there back in the day). It’s the perfect urban village, even if it no longer has Hobart’s or The Breakfast Club there. – Celia Coady, recruitment manager

Do you live in Dundrum? If so, please tell us what’s good, and not so good, about your neighbourhood by emailing homeanddesign@irishtimes.com