Priced out of Walkinstown? Consider Clondalkin

Graced by a 1,000 year old round tower, Clondalkin has a strong community feel and a good supply of family homes 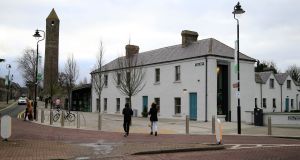 Clondalkin is without question one of the best value neighbourhoods in the capital, offering prices that are affordable to most and a location within striking distance of Dublin city, making it an option for those who may have thought their only alternative was to move to a commuter county.

The town itself is a very old one. There were Neolithic settlers before the town became a monastic settlement and the town’s round tower was built around 790AD.

Clondalkin developed into a mill town during the 1800s and expanded out into a grouping of homes, schools and farms in what was then rural Dublin. That growth continued in the 1900s as Clondalkin became the more than 40,000-resident town it is today, connected to the city centre via the N7 and the red Luas line at the Red Cow interchange.

Almost 40 per cent of Clondalkin’s homes date from between the 1960s and 1980s, with Celtic Tiger builds accounting for 35 per cent. Most of the earlier homes are in housing estates with communal green areas. Apartments are also present, but in small numbers – just 11 per cent - with houses accounting for the large majority of builds.

The most desirable homes are in the old south Clondalkin area, built in the 1960s and 70s and consisting mostly of three-, four- and five-bed terraced homes, as well as detached homes.

Those homes range in price from €325k to €550k depending on size and condition. An average across the whole of Clondalkin (including what is perceived as the less desirable area of north Clondalkin) would be €260k to €270k, with 280 houses sold in 2017. Similar homes in nearby Walkinstown are priced upwards of €50k more.

At the lower end of the price scale, a two-bed apartment can be bought for circa €130k-€180k. This pricing is exceptionally competitive and represents a huge opportunity for those on lower incomes looking to buy.

The majority of buyers are young couples, who are also first-time buyers. Many of these are Irish but there are also a number of eastern European and Asian buyers who are forming new Irish communities within the area. This demographic follows a consistent trend across the more affordable areas of the city.

A number of investors are also coming into the area, largely professional landlords, with five-plus properties already part of their portfolio.

A large number of the first-time buyers are coming from south Dublin areas that are closer to the city or located in property hot spots. Residents, usually renters, from the likes of Rathfarnham, Knocklyon, Saggart, Rathcoole or Newcastle are looking at Clondalkin as an affordable alternative. To a lesser extent there are also buyers coming into the market from “Tallaght, Dundrum, Kimmage, Terenure west and Inchicore”, says Paul O’Brien, director of Property Partners O’Brien Swaine.

Any new developments coming on stream?

Clondalkin is part of a Strategic Devleopment Zone (SDZ) and a large scale scheme, the Clonburris development, announced in September 2017 and in the final stages of planning approval, will bring 8,437 new homes to the wider area over the next decade. The SDZ spans 280 hectares and is located between the established communities of Lucan, Clondalkin and Liffey Valley.

Cairn Homes, the largest private landowner in Clonburris, said it could provide homes costing less than €300,000 and would be in a position to start construction straight away.

The lands benefit from two train stations; the Clondalkin-Fonthill station is operational, and the Kishogue station is constructed but not currently operational.

GAA, soccer, rugby, basketball and boxing are all served by clubs in the area with three of Ireland’s most famous sporting sons hailing from Clondalkin: former WBA super-bantamweight boxing world champion Bernard Dunne is from Neilstown; Kenneth Egan, 2008 Olympic light-heavyweight boxing silver medallist, is from Woodford; and current Dublin football manager Jim Gavin is attached to the Round Towers GAA Club, with five All-Ireland titles to his name – one as player, four as manager.

Clondalkin has had something of an image problem in recent times, largely due to a number of shootings that have taken place relating to the Hutch-Kinahan gangland feud, with the most recent being in Ronanstown in January.

But as in Finglas or Dublin 1, these are very much isolated incidents that cast an unfair image over what is largely a safe area. A number of well-regarded schools, specifically Gaelscoil na Camóige and Gaelscoil Chluain Dolcain, are located in the town.

The new addition of The Happy Pear, the first franchise opened by the Flynn brothers in Dublin, to the Round Tower Visitor Centre embodies green shoots in the village as it begins to try to assert itself as a go-to west-Dublin village. The building is a tasteful conversion of a number of old cottages, which has turned a run-down part of Clondalkin into a new hub for the town.

The Happy Pear doesn’t disappoint it must be said: the staff are friendly and knowledgeable about the produce, and the head barista was hired after an interview process that included several hundred candidates going for the role.

Further south lies the main village, with a large number of other eateries and The Laurels pub - its intriguing The Tree Top restaurant, built into a top-tier wooden floor of the village-centre building. It is well regarded and a decent spot to dine and chat with the locals over a scoop.

The northern end of town has the Mill Shopping Centre, which includes a Dunnes Stores. There are a number of vacant lots ready for development into eateries and retail all over town. It’s an interesting area with a lot of change planned, change that will produce a spike in property prices and desirability for the area in the not too distant future.