Collector paid more than £200,000 for items at Sotheby’s ‘Yeats Family Collection’ sale in London, and has given them to the Model as a mix of long-term loan and outright gift 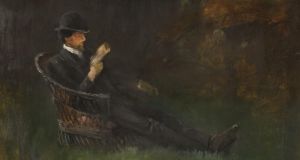 A mystery donor who bought several items from the Yeats Family Collection at auction in London last year has donated his purchases to the the Model, a public gallery and arts centre in Sligo. The man, who does not wish to be named and does not want any personal publicity, spent over £200,000 on Yeats family artworks in the Sotheby’s auction and his donation is a mixture of long-term loan and outright gift.

The Model is home to the Niland Collection of art which already includes paintings by father and son artists John Butler Yeats and Jack B Yeats. The gallery said that it had received a long-term loan of “paintings and drawings [which] include John Butler Yeats’s masterpiece Self Portrait, New York, as well as significant portraits by the artist of his accomplished children William, Susan, Elizabeth and Jack”. The eight artworks – six oil paintings and two sketches – were bought by the donor for a total of £175,000 in the Sotheby’s auction.

The most valuable is the painting Self-Portrait, New York (oil on canvas) by John Butler Yeats that sold at Sotheby’s for £87,500 – a new auction record price for the artist – and well above the estimate of between £30,000 and £50,000. John Butler Yeats, born in Co Down in 1839, was a well-known artist, best known for his portraits. He died, aged 69, in New York in 1922 and was survived by four children who all became important cultural figures in early 20th century Ireland: the poet WB Yeats, the embroidery designer Susan Mary “Lily” Yeats, the printing press pioneer Elizabeth “Lolly” Yeats , and the painter Jack B Yeats.

Also among the donated works is a painting by John Butler Yeats of his son, WB Yeats Reading in the Garden, Bedford Park, dated 1888/89 and depicting the poet in the garden of 3 Blenheim Road, Bedford Park in Chiswick, London, which sold for £30,000 in Sotheby’s – way above the estimate of between £8,000 and £12,000.

The Model’s interim acting director Emer McGarry described the loan as “a significant acquisition for Sligo’s municipal collection. It’s a fantastic body of work and will perfectly complement Sligo’s existing Yeats holding within the Niland Collection.”

The art will go on display in an exhibition entitled ‘Portrait of a Family’ at The Model from Saturday, June 9th to Sunday, October 28th, 2018. Ms McGarry said: “Given the recent concern that these paintings, particularly the John Butler Yeats masterpiece, would be dispersed, possibly abroad, we are delighted that they will be made available to the Irish public through the Niland Collection in Sligo, a place that was close to the family’s hearts. We are pleased to share these wonderful objects with our audience and are grateful to the private collector who has made this most generous gesture.”

Separately, the arts centre said the mystery donor had also presented – as a permanent gift to the gallery – nine of Jack B Yeats’s model boats, and a wooden travelling case used to carry them which is lined with original watercolour drawings. The artist had made the toy boats himself and frequently used them in his paintings. The boats were sold as a single lot in Sotheby’s for £1,750, just above the estimate of £1,000-£1,500. The wooden storage case, which features 19 ink and watercolour drawings by the artist that have been pasted onto the inside of the lid, sold for £15,000 at Sotheby’s – double the estimate of £7,000-£9,000.

Although the boats and the storage box were auctioned separately, they have now been reunited permanently and have already gone on display in the Model.

The donation appears to be a classic case of “no-strings-attached” philanthropy. The donor is not benefiting from any tax relief and has requested no credit or publicity for himself. Indeed, the gallery said it could not even reveal his nationality or place of residence.

The donated items had been sold by the adult grandchildren of the poet WB Yeats in an auction at Sotheby’s in September 2017 which realised £2 million. They had inherited the collection from their late parents Senator Michael Yeats (a son of the poet WB Yeats) and his wife the harpist Gráinne Yeats who lived in Dalkey, Co Dublin.

There had been some criticism of the auction by commentators who feared that the items would be sold overseas and lost to Ireland. However, after the auction it emerged that many of the items – in addition to those being donated to the Model – had, in fact, been acquired by Irish buyers. Several Irish cultural institutions, including the National Library of Ireland, the National Gallery of Ireland and the Office of Public Works, were among the successful bidders, and the artwork they acquired has been returned to Ireland for the permanent State collections.

Sotheby’s also announced that WB Yeats’s writing bureau – a desk used regularly by Yeats for his correspondence in his later years – that sold in the auction for £187,500 (over six times the top estimate of £30,000) was acquired by an Irish private collector, who plans to put in on public display in Ireland at a venue yet to be revealed.